Because of the pandemic, I have Vincent Canby’s desk. Millions of witty words must have drummed from his fingertips where I now slouch, stalled and mostly unproductive, without deadlines to drive me.

During a 35-year career at The New York Times that ended in 2000, Mr. Canby wrote thousands of reviews and profiles, plus novels and plays in his spare time. Just look at the adjective in the headline of his Times obituary, published 20 years ago: “Vincent Canby, Prolific Film and Theater Critic for The Times, Is Dead at 76.” His byline even appeared nearly three years after his death, an advance 3,212-word obituary of Bob Hope, painting him as “a fast-talking wiseguy, a quaking braggart, an appealing heel with a harmless leer and a ready one-liner.”

It’s a lot to live up to. Could his desk help straighten my spine, get me back in the game?

My friend Ridgely Trufant, whose mother was Mr. Canby’s first cousin, inherited his estate, including his personal desk: six feet long, chocolate-hued with gargoyle legs and brawny, clawed feet. A rail of timber embellished with chiseled rosettes supports the structure, so it’s actually called a trestle table, Google tells me. 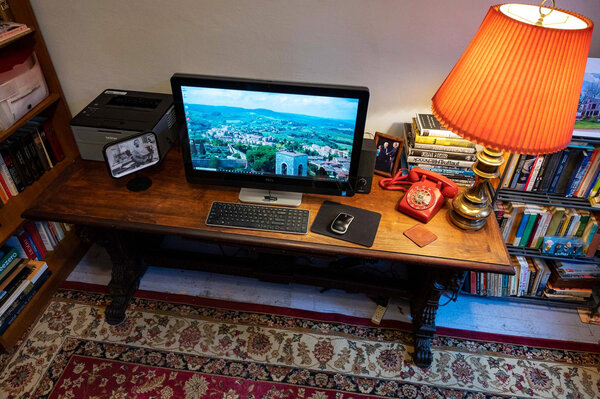 I have scrutinized its undersides, crannies and shallow drawer with a flashlight and found no identifying markers other than a strip of masking tape on the left side labeled “6755.” The lot number or price Mr. Canby paid for it? Ridgely doesn’t know, but suspects her cousin bought it in the 1960s or ’70s when he lived in Brooklyn Heights, and Atlantic Avenue was lined with antique shops.

I found a photo online of Mr. Canby posed at the desk in 1980, an ashtray to the right of his typewriter. I’ve framed it, so he’s here to challenge me, his eyes contemplating something in the distance, his smile a little skeptical. By this time he had settled into a roomy apartment on the Upper West Side, where he put up Ridgely when she came to the city to be a dancer.

In the mid-1980s, Ridgely and I met at Perretti Italian Café on Columbus Avenue, where we were both waitresses. Mr. Canby, at the height of his career as a film critic, would sometimes visit the restaurant. As a cinephile and aspiring writer, I revered his opinion, and he was curious about mine, never treating me like a peon because my job involved an apron. His erudite, lucid film reviews drove me to haunt now-bygone theaters like the Thalia, the Beekman, the Plaza, the 57th Street Playhouse, the 68th Street Playhouse, and Lincoln Plaza Cinemas.

Since all movie houses went dark in March, the Criterion Channel has served as my personal theater, its vintage offerings leading me to reread scores of Mr. Canby’s reviews before I ever dreamed of possessing his desk. We don’t always agree, but they hold up, lively and illuminating as ever.

In 1993, he switched to the theater beat. He often took Ridgely as his guest when reviewing shows, and Perretti’s was a convenient stop on his way home. His longtime girlfriend, Penelope Gilliatt, had died that year, at 61. Another prolific writer, her short stories, profiles and film criticism had appeared in The New Yorker, her screenplay for “Sunday, Bloody Sunday” was nominated for an Oscar, and she wrote five novels.

Ridgely said Mr. Canby deeply loved Penelope, but at Perretti’s he was adroit at masking his grief, charming and quick to laugh. He sat in the smoking section and started with a vodka on the rocks. He had a trim physique and dressed like a dapper newspaperman in a tweed jacket with elbow patches, Oxford shirt buttoned just so, his short gray hair neatly parted.

One night in particular endeared him to me. I can see him at Table 3, looking up and asking me how I was.

Terrible, I told him. I had moved to New York from Arkansas to be a writer and didn’t have to be at work until 4 o’clock and yet had written nothing that day.

“You are a real writer!” he declared, jutting his brown cigarette at me. “That’s exactly how I feel if a day goes by and I haven’t written anything. Just lousy.”

I was a waitress at Perretti’s for 13 years. The restaurant’s health care plan was invaluable as I advanced my freelance writing career, covering the entertainment world, restaurants and travel. When the restaurant closed in 1998, I hung up my apron, and doggedly got enough assignments to write full time.

Those gigs were consistent until this March, when restaurants and travel shut down. I used to wonder what I might accomplish — a novel, a biography, a play, a sellable screenplay — if I didn’t have constant deadlines. It turns out I’m teeming with ideas, but without an editor checking in on me, I lack focus.

Other productive writer friends have expressed similar chagrin. A tweet from David Wondrich struck a chord, likening these unnatural days to “writing with a head full of molasses and fireflies.”

In the first few months of the shutdown, I, like many other New Yorkers, found purpose in decluttering the apartment, culling books and getting rid of obsolete bank statements, press materials and embarrassing screenplays. Some of my aborted creative writing projects made me cringe, while others made me tilt my head, thinking, Not so bad. Why hadn’t I tackled another draft?

Maybe it was the lack of a real, official desk that left me uninspired. In 22 years of being a professional writer, I had never put much thought into my work space. Until this year, I wrote on a slab of wood propped up by two black file cabinets.

The coronavirus changed that. In August, I found myself on a Zoom chat that included Ridgely. She lives in a one-bedroom apartment in the West Village, where she had recently committed herself to multiple virtual movement classes taught by yogis, choreographers and tango taskmasters around the world. Her living room had become a dance studio, with one big problem.

My hand shot up.

The Canby desk is a gem. I spent most of an afternoon rubbing its broad tabletop with beeswax polish and plugged away with a toothbrush to gouge the lint from legs bulging with cartoonish round eyes, libertine tongues and feathery toes. Curious about its provenance, I emailed photographs of it to antique shops and auction houses, but got no definitive answer other than that it was probably made in Europe in the mid- to late-19th century.

I do know one thing: The desk should stay in the Canby family. I have retooled my will to leave it to Ridgely or her survivors. In the meantime, here I sit, rebuilding my writing life sentence by sentence. I just got an unexpected assignment for 3,000 words. The deadline is calling me back to work, and the desk feels like an old friend here to help.

Coronavirus: Husband warns of dangers after wife dies in hospital Britain is continuing to ramp up its vaccination efforts in a bid to soon relax…