[Race/Related is also available as a newsletter. Sign up here to get it delivered to your inbox.]

I drove past a mini mall the other day in my hometown, Commack, N.Y., where my favorite Indian buffet, Kiraan Palace, once stood. My brother, Ravi, and I used to spend almost every Saturday afternoon as teenagers at the corner table, closest to the buffet line, while our regular waiter refilled baskets of garlic naan at our table every 20 minutes. While most of our friends were eating at the pizza place up the block or scarfing down hot dogs at Nathan’s across the street, we held court at our unusual hangout because it felt most like home. And when it closed a few years later, we made sure to find a new refuge.

Eating at Indian buffets was an essential activity throughout my childhood and remains steadfast into adulthood, though I haven’t been to one since mid-March because of the coronavirus pandemic. Many of my favorite haunts have offered takeout and outdoor seating, but none have tried to reconfigure the concept of a buffet. Indian buffets don’t often use sneeze-guards as one would see typically at a chain restaurant. The idea of touching a shared utensil to serve oneself from a communal pot may make some feel squeamish right now.

While buffets might land on the low end of restauranteering, they also represent the American dream to the many immigrant business owners who operate them and to the diners who are adventurous and hungry enough to attend. They symbolize the freedom to make individual choices based on curiosity and taste, and the possibility to not only desire more but to also actually make it happen. 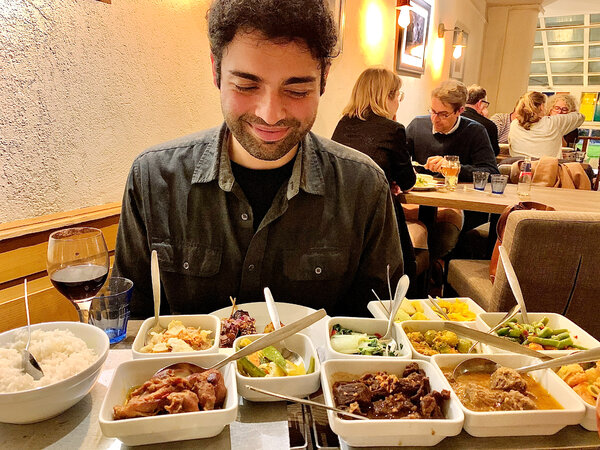 Eating at buffets is a tradition that started in my family before I was born. When my Indian father married my Puerto Rican and Italian-American mother, in 1981, Indian restaurants weren’t as common in New York as they are today. The two frequented the Jackson Diner on dates and other local spots in Jackson Heights, Queens, a bustling working-class immigrant neighborhood composed largely of newcomers from India, including my father.

My mother’s new in-laws expected her to cook Indian food for her husband. Accepting the challenge, my mother visited every Indian restaurant she could find, dining alone at the lunch buffet so she could freely select and analyze each dish to better understand the ingredients. Occasionally, she would ask the owners if she could observe the chefs in the kitchen so she could take notes and test the dishes at home. Most of the time, they allowed her to observe.

Shortly after my brother and I were born, we moved to a mostly white Long Island suburb. Growing up in a multiracial family meant an early exposure to dishes from around the world, whether made at home or in restaurants. I quickly learned that most of my friends’ palates weren’t as sophisticated and spoiled as mine. Most of them hadn’t tasted Indian food before or even knew what it looked like.

On weekends, we would regularly take a friend with us to the Indian buffets that sprouted up in nearby towns. The free will to sample anything that intrigued them permitted less pressure than selecting a single menu item. Pals with weaker stomachs would proclaim, “This is too spicy!” as they reacted to the cumin or turmeric. Ravi and I worked overtime to make them feel at ease, even though we couldn’t understand their aversion to spices. No matter the special guest, however, garlic naan was a consistent crowd pleaser.

The collaborative and explorative dynamics of eating at Indian buffets were more formative for me than any bourgeois sit-down restaurant could offer. Where else could you, for $10 to $20, step up to a variety of offerings of your choosing? Buffets are a gateway into the unknown.

I still get a thrill observing diners walk over to the buffet line and head straight for the chicken makhani, or butter chicken as it’s more commonly called in the United States. For introductory eaters, it poses no apparent threat because it’s not very spicy, it’s often rich in cream and it’s easy to comprehend by first sight: chicken blanketed in a brilliantly hued sauce. No wonder it’s one of Trader Joe’s most popular items.

The more daring eaters may serve themselves a scoop of chana masala or palak paneer. Add some kebabs, drizzle some chutney over your spread, and your plate is now complete with samples of Indian cuisine you wouldn’t be able to try if ordering only one dish at a sit-down restaurant. There’s no need to ask a waiter, “What’s that?,” because that choice is dependent on your willingness to pick up the serving spoon and give it a try.

Encounters on a buffet line remind us of our commonalities, through what we eat. “What’s in that?” a nervous, older Hispanic woman once asked my mother, pointing at the chicken biryani. “It’s like arroz con pollo but spicier,” she explained. The woman relaxed and added a scoop to her plate. That day, my mother felt proud as she bridged a gap of comprehension. More often than not, I’ve seen buffets reward curiosity and give people confidence to try food from places unknown to them, no matter a person’s age or background.

Years may pass before any of us feel entirely comfortable or capable of eating at a buffet, let alone an enclosed restaurant setting, but I do hope the basic concept of such selection never completely disappears. For my family, buffets have provided memories and encounters that can’t be replicated by delivery. I yearn to be back on the buffet line someday, with fresh garlic naan waiting at the table alongside a pot of masala chai and good conversation.

Raj Tawney is a writer in New York. He often writes about the multiracial experience from his Indian, Puerto Rican and Italian-American perspective. Visit him at rajtawney.com.

Invite your friends.
Invite someone to subscribe to the Race/Related newsletter. Or email your thoughts and suggestions to [email protected]