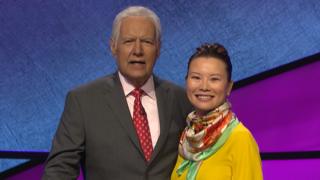 A woman who learned English as a child by watching Jeopardy! has fulfilled her dream by becoming a contestant on the game show.

Kristyna Ng, who moved to Canada from China when she was eight, appeared on the game show some 30 years later.

Although she came in second place, she said: “I feel like I won the lottery just by being on the show.”

She has watched the programme nearly every day since she was a little girl, and it was one of the things she and her husband initially bonded over.

“Jeopardy! has been the soundtrack of my life,” she said.

Ms Ng did well on Tuesday’s episode, trailing front-runner Danyelle Long-Hyland by just $600 (£460) before going into the Final Jeopardy.

She said she began watching the show when she was a child and had just moved to Canada with her family. She did not speak a word of English, and watching Jeopardy! and Wheel of Fortune, which played back-to-back every weekday, helped her figure out some of the language’s trickier quirks, like the difference between minute (a measure of time) and minute (very small).

She said Jeopardy! was especially helpful, because it helped her learn things about a wide variety of subjects, from music to sports.

“It helps you build a stronger vocabulary, but it also helped me build a lot of cultural contexts and general knowledge to be not only a fully participating Canadian citizen, but also a global citizen,” she said.

She has since gone on to earn her Master’s degree in public administration, and now works for the city of Calgary.

She was initially encouraged to try out for the show by a friend she and her husband had made while playing trivia on board a cruise ship.

She got a little help on this week’s episode from her friend’s daughter, who bought her a Jeopardy! quiz book for good luck. One of the questions in the book was “What is a spinnaker?”, and that question popped up during the show.

The answer: A sail.

Ms Ng appearance on the show was especially meaningful because of host Alex Trebek, she said. Mr Trebek, 78, has been hosting the popular game show since 1984, and recently revealed that he was battling stage four pancreatic cancer.

In a statement uploaded to the Jeopardy! YouTube channel, he said that “normally the prognosis for [his cancer] is not very encouraging”.

Ms Ng said he was “a genuine, humble and courageous” person. Between takes, he chatted with the audience about everything from his cancer treatment to his leaf-blower.

“I could not have had a better experience, to be standing on the same stage of the great Alex Trebek,” she said.