Debra Hunter, 53, was seen in a widely circulated video last year coughing on a customer who was recording her dispute with employees at a home-goods store in Jacksonville, Fla. 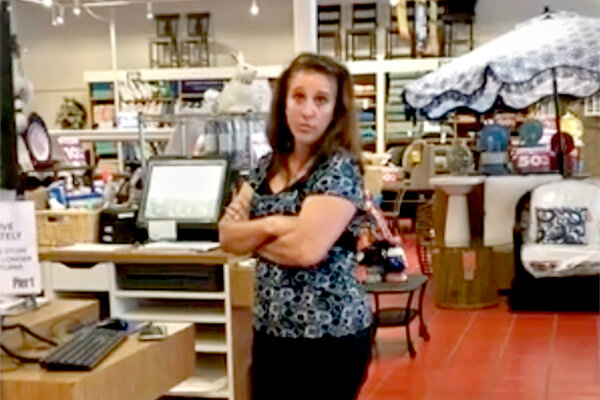 A Florida woman who was seen in a widely watched video intentionally coughing on a shopper at a Pier 1 home-goods store last summer, as fears about the pandemic raged, was sentenced on Thursday to 30 days in jail, court records show.

The woman, Debra Hunter, 53, had been charged with misdemeanor assault in June after she walked up and coughed on the shopper, Heather Sprague, who had been recording video of Ms. Hunter’s dispute with employees at the store, in Jacksonville.

Ms. Sprague said in court that she had started recording Ms. Hunter after watching her berate store employees for 15 minutes in an argument over an item that Ms. Hunter wanted to return.

Ms. Sprague said she had undergone surgery to remove a brain tumor 10 months earlier and was still undergoing treatment when Ms. Hunter saw that she was recording and made an obscene gesture.

“I think I’ll get real close to you and cough on you, then, how’s that?” Ms. Hunter says in the video as she approaches the cellphone and then coughs. Ms. Sprague, who said she was wearing a mask at the time, testified that Ms. Hunter had left spittle on her face.

“The defendant’s act of coughing in my face at the height of a pandemic was an act that was calculated to attack me at my weakest point, physically and psychologically,” Ms. Sprague told Judge James A. Ruth of Duval County Court, according to a recording of an online sentencing hearing that was posted by First Coast News. “I was stunned in the moment and increasingly fearful in the aftermath.”