Long before George Floyd was killed during an encounter with Minneapolis Police officers last May, the department was struggling with a history of police misconduct and allegations of racism and sexism within its ranks.

A documentary that debuts this week on PBS takes viewers inside the police force, offering insight into the inner workings of the department and its efforts to connect with residents.

Filmed between 2017 and last year, the documentary, “Women in Blue,” follows the first woman to serve as chief, Janeé Harteau, and focuses on four female officers, each trying to redefine what it means to protect and serve. After a high-profile, officer-involved shooting forces Chief Harteau to resign, the new, male chief selects only men as his top brass.

The film, which airs on Monday, reveals the limitations of police reform through incremental changes and asks — and tries to answer — questions that apply well beyond the city of Minneapolis, including whether increased gender equity and more women, particularly Black women, contribute to better public safety.

Deirdre Fishel, the film’s director, talked about the challenges — and the importance — of making “Women in Blue” at this time. Our conversation has been lightly edited.

How did the idea come about?

After Eric Garner’s death at the hands of police in Staten Island, N.Y. I was only a couple of blocks away because I was filming my last film. It just seemed unbelievable and so outrageous, and I had a woman friend who was a cop and I had actually never talked to her about policing because I was somewhat anti-police and I asked her if it could have happened if she was there. She explained to me what her approach would have been, which was such a human approach. Then I started thinking, “do women police differently from men?”

I found statistics going back 30 years that women rely less on physical force because they communicate better, and they’re better at defusing potentially violent confrontations before they turn deadly. And I just thought, given the prevalence of police violence in this country, why is the issue of gender kind of nowhere to be seen?

What made you decide to focus on the Minneapolis Police Department?

Two reasons: One was that there was a woman chief and that she had made it a priority to recruit women and retain them and promote them. But also, truthfully, I knew that there had been this officer-involved shooting of Jamar Clark a couple of years before and that many of the issues that we’re facing in the country in terms of police violence were also happening in Minneapolis.

I never wanted to make a film that was just about women that was siloed away from the broader issues of policing. So it felt like it was a department that was struggling, and yet they were trying to reform and they were championing women, and the access I got was just really unusually good. Not having any idea that the Police Department would become the emblem of state violence.

I was so excited when I started the film because there was a young Black woman from a police family in North Minneapolis who really wanted to work in the community. But she didn’t run fast enough in that mile and a half and she never got on. The reason that there are so few women in the police force is that it hasn’t been a very hospitable place for a lot of women. In thinking about outreach and trying to get this issue out on the national agenda, it’s not going to happen unless people demand it. 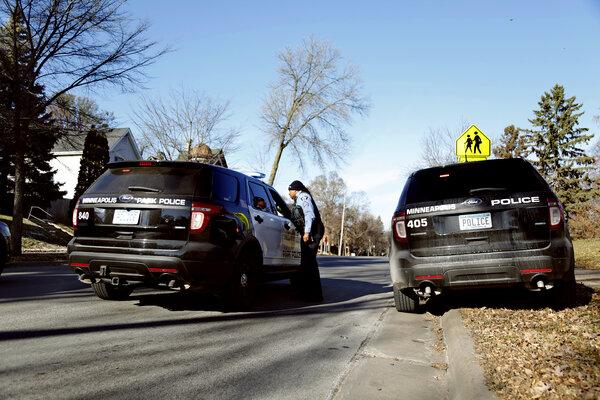 Was filming difficult for some of the subjects in the documentary, such as Officer Alice White, especially after the death of George Floyd?

I think it was very hard for her. She was torn the whole way. She felt very afraid of sticking out. She already did since there were few Black women. People would think that because of the filming, that somehow her male colleagues would feel negatively toward her. And every time there was an officer-involved shooting things definitely got a lot more tense. Communication sometimes stopped for a little while.

It was very tense for a few years on many levels. The community was rightfully so outraged. The Police Department was in a very defensive position. I was told that a lot of the men did not want me there. For many of these women, it was really hard after the first female chief resigned because they’d had a little bit of a taste of what it would feel like to be able to have influence and be empowered and it felt like a real backslide. And I think that’s why a lot of them left during the course of the making of this film. It just felt like they didn’t feel that they were going to be able to have any impact on the way things were going.

What do you hope people get from the documentary?

I hope that people get a little bit of a sense that things are very complicated and that change is not easy. Not as an excuse, but just an understanding of what needs to happen, that it’s big. As a society, we’d better be ready to roll up our sleeves. I think the film really shows that incremental reform doesn’t work. So however I think you parse it, I don’t think you can just put in new training or hire a few new people and it’s going to make a difference. I think we need an overhaul of a system about what the expectations are, what the requirements are and who do we get doing it. And accountability.

But I’m hoping that the film and the moment — with Kamala Harris, Stacey Abrams, Val Demings and so many extraordinary women out there — that we’ll get a little bit of traction and that people will think, “I thought about race, but I never really thought about gender and how having more women could really impact the level of police violence against communities of color.”

Who do you hope the documentary reaches?

I hope it reaches those decision makers. And I hope it also reaches people who are engaged in police reform. I’d love for us to be able to engage in some of those more difficult conversations about what women could potentially bring and what that could look like. So that when people are thinking about really reimagining public safety, that they’re thinking about gender as part of that conversation.