Three Yale students who claim they were groped at fraternity parties have filed a class-action lawsuit against the university, arguing the school has fostered an environment where alcohol-fueled gatherings at off-campus fraternity houses dictate the undergraduate social scene.

While the New Haven, Conn., university presents itself as a campus where fraternities are not a major presence, the lawsuit states that few options besides fraternity parties exist for women who want to socialize and meet other students.

The lawsuit, filed Tuesday in federal court in Connecticut, comes as universities across the country have been trying to crack down on bad behavior by fraternities, from binge drinking and sexual harassment to abusive hazing rituals that have led to several deaths. Aware that their image has been tarnished, fraternities have often been partners with universities in trying to change party culture.

A class-action lawsuit against Yale and its fraternities claims the university has fostered an environment where the fraternity houses dictate the campus social scene. 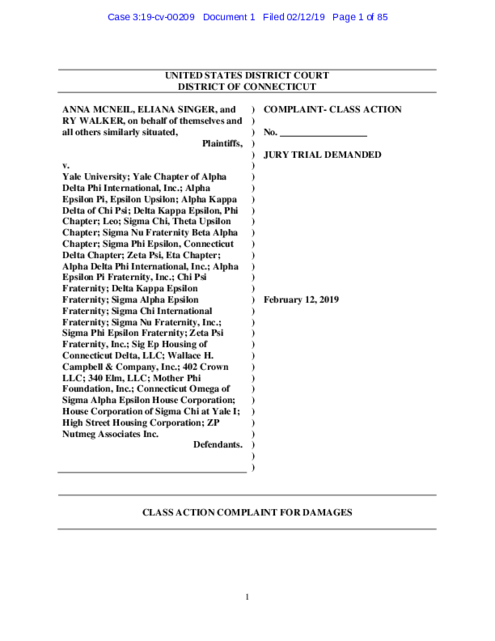 Yale has often looked the other way, the plaintiffs claim, while parties rage and women from Yale and surrounding colleges are routinely sexually harassed and abused.

Joan Gilbride, a lawyer for the fraternities named in the lawsuit, said the accusations are “baseless and unfounded,” and that the fraternities and their national organizations would vigorously defend themselves against the claims.

A Yale spokesman, Thomas Conroy, said he could not immediately comment on the specifics of the lawsuit. But he shared a message to Yale students last month from the dean of Yale College, Marvin Chun, after a yearlong review of campus culture, including fraternity culture. It said in part, “I condemn the culture described in these accounts; it runs counter to our community’s values of making everyone feel welcome, respected, and safe. I also offer some plain advice about events like these: don’t go to them.”

The dean said that Yale “plays no formal role in the organizations not affiliated with the university, including Greek organizations,” and he said the university was working on providing alternative social spaces and events on campus.

The lawsuit acknowledges that there may be questions about Yale’s ability to regulate off-campus organizations.

“Yale often claims that the university cannot punish the fraternities because they are unregistered, off-campus organizations,” the lawsuit says. But it argues that this position is disingenuous, because the fraternities “act as extensions of Yale,” providing party space, while Yale permits them to use the Yale name, Yale email addresses, Yale bulletin boards and campus facilities for recruitment.

Peter McDonough, general counsel of the American Council on Education, a university trade group, said universities have been reluctant to become too deeply involved in regulating fraternity life.

“The very concept of a campus is where people learn not only from each other but through shared experiences,” he said. “And this isn’t the K through 12 environment.”

The plaintiffs — a sophomore and two juniors — have demanded in the lawsuit that Yale and its fraternities rein in the parties. They have also asked for a court order that would force the fraternities to admit women and allow them to share in the benefits of membership, like housing and powerful alumni networks that can lead to jobs, internships and social capital.

The three women who filed the suit are Anna McNeil, 20, a junior from Brooklyn majoring in art history; Eliana Singer, 19, a sophomore from Minneapolis majoring in political science; and Ry Walker, 20, a junior from Brooklyn majoring in astrophysics and African-American studies. The law firm representing them, Sanford Heisler Sharp, is also representing women who are suing Dartmouth College for sexual assault and discrimination by three professors who they said turned a human behavior research department “into a 21st-century Animal House.”

All three women in the Yale case said they were groped at fraternity parties during their first semesters. In the lawsuit, Ms. Walker, who is African-American, said she was passed over by fraternity brothers controlling admission to a party, while white women behind her were admitted.

“We eat together, take classes together, exist in this coeducational place,” Ms. Walker said in an interview. “But somehow because of the way Greek life operates on campus and the control they have over social spaces here, that means that on weekend nights, men are the only ones who have power.”

Sororities are not a substitute for fraternities, the plaintiffs said, because they have been around for much less time, and do not have the depth of contacts that fraternities have.

The lawsuit, filed as a class-action complaint, accuses Yale of violating Title IX of federal education law, which prohibits sex discrimination by institutions receiving federal funding, and breach of contract for not providing the educational environment it promised. It accuses the fraternities of violating the Fair Housing Act for offering housing only to men, and Yale and the fraternities of violating Connecticut’s law against discrimination in places of public accommodation. It seeks unspecified damages.

The women belong to a student group called Engender that has used civil rights-type tactics to try to force fraternities to accept women. For the past three years, women and “non-binary” students from Engender have tried to join fraternities. Only one fraternity, Sigma Phi Epsilon, let them apply, according to court papers. But in the end they were denied and the fraternity chapter said it was because their national chapter did not allow women, the lawsuit says.

The complaint suggests that there is a “symbiotic” relationship between Yale and its fraternities, which involves letting the fraternities manage social life on campus, in exchange for Yale officials looking the other way when parties get out of hand.

“The fraternities take on the liability associated with student alcohol consumption, and in exchange, Yale allows the fraternities to use Yale resources (and recruit Yale students) and largely turns a blind eye to the sexual harassment and assault occurring in connection with the fraternities,” the complaint says.

The lawsuit claims that Yale lags behind peers like Harvard, which in 2016 announced that it was discouraging students from joining single-sex social clubs by barring them from leadership positions on campus and from receiving endorsements for prestigious scholarships like the Rhodes.

In December, Harvard was sued by fraternities, sororities and students saying the new policy is discriminatory.