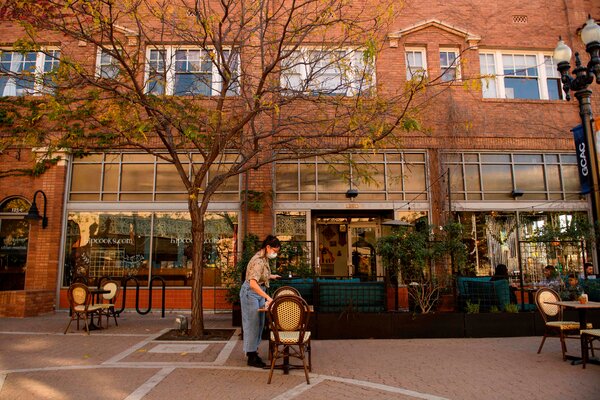 For the past week or so, I’d been wondering when or if another significant lockdown was coming amid a frightening rise in coronavirus cases. So on Monday morning, I called up Dr. Bob Wachter, a professor and chair of the University of California, San Francisco’s department of medicine, to weigh in on whether it would be warranted.

[Read about California’s move to “pull the emergency brake” on reopening.]

By the end of the day, those questions had been answered: Gov. Gavin Newsom announced a major reopening rollback — a move Dr. Wachter told me he saw as a reasonable step.

But it was one move in broad efforts to head off what officials have been warning for weeks could be a catastrophic holiday season.

I asked Dr. Wachter more about what’s on his mind now. Here are excerpts from our conversation, lightly edited for length and clarity:

First, tell me about what you’re tracking most closely in California.

The state of the pandemic is just terrible across the country. But then you have this vaccine news, which is unbelievably hopeful. I think the human brain has a hard time reconciling those two data streams.

The vaccine news over the last couple of weeks has really changed the way I think about the next year, but we’ve got to make it through the next year.

Things are worse than I think I and others had predicted. California is in the early part of a surge, but it’s different than June, in that it’s much more national and distributed than the prior surges.

How much do you think we’ve learned about things like indoor versus outdoor dining since the beginning of the pandemic? And have we learned enough to make it possible for restaurants to operate safely indoors at all?

We do know that being outdoors and ventilation are extraordinarily important. And spaces with poor ventilation, where people spend time with their masks off is all the bad things stuffed into one.

The contact tracing data that’s emerging is supportive of the premise that when you start seeing exponential spread, what’s likely going on is people are spending more time indoors, in spaces with their masks off. Restaurants, by definition, fit that description, unfortunately.

California is in a very different spot from the last time we talked at length in terms of testing. How are you thinking about it now?

Testing is really complicated in all sorts of dimensions.

It’s partly why the failure of the C.D.C. during this is so maddening, because part of a vigorous federal response would have been to ramp up testing capacity and then to create clear guidelines for different situations. Lacking that, we’re all doing improv.

In a different world, you can imagine a widespread availability of rapid 15-minute turnaround tests that people take before they go into work to be sure that everybody in the workplace that day is not contagious. And if they are, they go home. If they don’t have the means to stay isolated, society says it’s worth using some communal money to be sure they have a place to stay so they don’t go and infect a whole bunch of other people. That would have been a reasonable and rational response to this. Of course, we’ve seen none of that.

Testing and then sort of the related issue of contact tracing are systems that can be an important part of the response, but not everything. Both of them tend to fall apart just when you need them most.

You can have a testing and contact tracing program that’s working reasonably well when your case volumes are low. People can get a test quickly and get it back. It’s a little bit like hospitalizations, in that these are systems that you have to design and resource not for a good day, but for a bad day.

Once these systems get overwhelmed, everything gets worse very quickly. Knock on wood, we’ve not seen that yet in California, but we’ll see what happens in the next couple weeks.

How worried are you about Thanksgiving?

I’m massively worried. We couldn’t be more poorly positioned and the timing is just optimally terrible.

In California, things may be a little better. But if you wanted to design something to make things go worse, you would have designed Thanksgiving exactly when it’s coming.

But I see this in light of the vaccine news, which I believe now makes it somewhere between likely and very likely that by next Thanksgiving, life will be pretty close to back to normal.

The county is also tightening other restrictions, reducing capacity at indoor businesses and capping the number of people at outdoor gatherings at 15 from no more than three households. [Los Angeles County Public Health]

Here are tips for making your Thanksgiving safer. [The New York Times]

A deal more than a decade in the making was announced to remove four hydroelectric dams choking the Klamath River. [North Coast Journal]

And read about how this year’s catastrophic fire season has forced officials to finally turn to Native American ecological expertise. [The New York Times]

Michael Tubbs, the youngest person and first Black man to be elected mayor of Stockton, conceded to Kevin Lincoln, a pastor and businessman: “He will need all of our support.” [The Stockton Record]

A man wanted in connection with a Ponzi scheme briefly evaded federal authorities by escaping into Lake Shasta using an underwater “sea scooter.” [The Sacramento Bee]

If you need a tiny pick-me-up or a hot tip for your next virtual trivia, here’s some news that can serve as both: Dolly Parton — yes, that one — has been credited with making possible the development of a promising coronavirus vaccine by way of a donation to Vanderbilt University Medical Center.

Is this news California-related? Not strictly speaking — except in the sense that Ms. Parton is a hero for all Americans.