The taxi line at La Guardia Airport had barely budged.

There were no cabs in sight, and the grumbling was getting louder. People scanned the road for any glimpse of yellow. A dispatcher grimaced.

Finally, a lone taxi rolled up for a waiting passenger. Then it was gone.

“I haven’t seen it like this,” said Alex Hyken, 28, who lives in Brooklyn and had just returned from visiting relatives in St. Louis, only to find herself stuck behind 40 people who were also trying to get a taxi. Ten minutes later, she whirled off with her suitcase in search of an Uber or Lyft.

When the pandemic shut down New York, it all but wiped out the city’s taxi industry, as commuters worked from home, tourists stayed home and businesses closed. Fleet owners reduced operations or suspended them altogether. Many drivers found other jobs, including driving trucks or making Amazon deliveries.

Now, as the city starts to recover, buoyed by low virus rates and widespread vaccinations, yellow taxis are largely missing from many street corners and airport arrival areas.

There are about 6,000 cabs on the road currently, according to industry analysts. That represents fewer than half of the total pool of 13,500 medallions, the city-issued permits required to operate a yellow taxi. Some 5,700 of those that are not working were taken out of service indefinitely by owners who put them into storage voluntarily and returned the license plates.

The shortage is the latest setback for an industry that has struggled amid an influx of ride-hailing services and a spate of suicides among taxi owners and for-hire drivers. Even before the pandemic, some taxi owners faced financial ruin after being lured into taking on reckless loans to buy medallions at artificially inflated prices.

In New York, Chicago, Las Vegas and other cities, demand for taxis and ride-hail cars has rebounded sharply from pandemic lows, outpacing the return of both drivers and cars. That has led to frustrating waits for riders, when taxis are even available.

With drivers slow to return to work, the lack of for-hire cars has also pushed up the fares charged by ride-hailing apps like Uber that switch to so-called surge pricing when demand peaks.

Many taxi owners are wary about how soon business will rebound. Demand is inconsistent and could be diluted if more cabs come rushing back to the streets, they said. The industry’s immediate future also depends on how soon workers return to their offices, and how soon tourists and business travelers come back to New York in big numbers.

Richard Wissak, whose family operates 140 taxis, took his cars out of service last year as the coronavirus shut down the city. He later put the entire fleet into storage to save thousands of dollars in insurance, taxes and fees.

“The city was in awful shape,” he said. “No airport work, no office work, and that’s the heartbeat of the yellow taxi industry.” 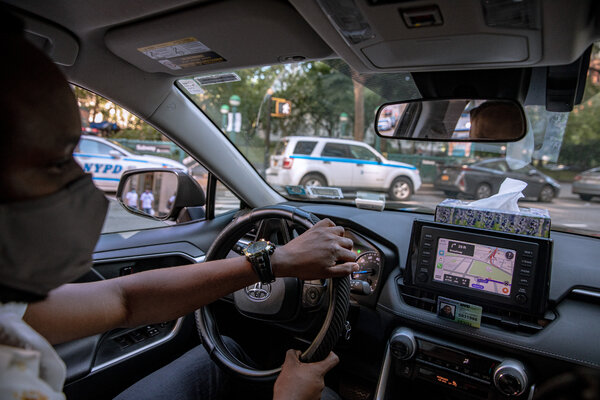 Mr. Wissak wants to get his taxis back on the road, but he worries that there is not enough business yet. “Why are we going to put our toe back in the water if we’re not going to be able to survive?” he said.

Many owners of single medallions also received a temporary reprieve on their loan payments during the pandemic. Once they start working again, the payments may restart again too, without a guarantee that the owners can earn enough to afford them, said Bhairavi Desai, the executive director of the New York Taxi Workers Alliance.

“They don’t want to go back to work before there’s substantial debt restructuring,” said Ms. Desai, whose group has started a fund to help taxi owners pay off their medallions in cash at lower prices.

Another thing causing the shortage of available taxis is that some drivers who qualified for expanded unemployment benefits during the pandemic have not yet come back to work. Others have moved away or taken other jobs.

Mohammad Hossain, 45, a driver from Queens, said that two of his friends — one who drove taxis, the other who drove for Uber — continue to collect unemployment, though “I’ve tried to tell them our business is a little bit better.”

About 6,000 taxi drivers were working in April, according to Bruce Schaller, a transportation analyst. That was up from 2,200 in April 2020, at the pandemic’s height, but far below the 20,000 who were working in February, Mr. Schaller found.

Many fleet owners have tried to attract more drivers by slashing leasing rates for taxis to make it easier for drivers to make money.

The Taxi and Limousine Commission, which oversees the industry, is working closely with taxi operators to ensure there are enough taxis to meet demand and trying to help drivers by streamlining the regulatory process, said Allan Fromberg, a commission spokesman.

The lack of drivers and cars has also affected ride-hailing services. About 54,000 worked for the services in New York in April, compared with 79,000 in February 2020, Mr. Schaller said. Across the United States, a ride with such a service costs as much as 40 percent more than it did a year ago, according to the research firm Rakuten Intelligence.

Uber has dangled $250 million in bonuses and incentives to recruit more drivers around the county. In New York, the result has been more drivers and fewer rides at surge-pricing levels. “Drivers are returning to Uber in force to take advantage of higher earnings opportunities from our driver stimulus,” said Alix Anfang, an Uber spokeswoman.

The shortage is a temporary problem that should be resolved as more drivers answer the demand for rides, Mr. Schaller said. But while the availability of cars may return to prepandemic levels, he added, Uber and Lyft fares may remain high, in part because customers are willing to pay them.

“It’s like restaurants, it’s like Broadway, it takes a while to put things back in place,” said Mr. Schaller. “And things will go back differently than before.”

Sunny Madra, who visited New York from California in late May, tweeted that an Uber from Midtown Manhattan to Kennedy International Airport had cost him $248, or nearly as much as his $262 plane ticket.

“We all have this prepandemic muscle memory: You walk out, you hail an Uber and it’s reasonably priced,” Mr. Madra said in an interview. “A $200-plus Uber, you sort of say, ‘What happened here?’”

Elizabeth Halem, 43, said she wanted to support taxi drivers by taking cabs but that even before the pandemic, she never saw them in her neighborhood, Greenpoint in Brooklyn.

“Sighting a cab would be like sighting Bigfoot,” she said. “Cabs are sort of mythical beings here.”

Instead, Ms. Halem ends up ordering cars using Lyft, which can cost nearly $50 for a ride, or almost twice what she paid before the pandemic.

On a Thursday in Downtown Brooklyn this month, shoppers loaded with heavy bags waved down passing taxis. One woman, Lissette Carter, 41, said she was occasionally forced to settle for an Uber even if it cost more. “It’s painful, but you’ve got to get around when you don’t have a car, especially if you’ve got small children and it’s raining,’’ she said.

The taxi shortage has led to long lines at La Guardia, where there is no direct link to the subway or commuter rail lines. Supply and demand can fluctuate, with taxis outnumbering passengers at times since there are still fewer air travelers than before the pandemic.

“It’s almost impossible to survive,” said Stephen Benesoczky, 70, a taxi driver who waited close to an hour to pick up a fare. He spends nearly $200 a day to lease the taxi and cover his gas and expenses. If he makes $400 in fares, he said, “that’s a good day.”

The Port Authority of New York and New Jersey, which runs La Guardia and Kennedy, has taken steps to try to bring in more cabs, including sending regular updates to drivers through the taxi network’s internal messaging system. The authority has also created Twitter feeds to post information about airport hold lots, where cabs wait to be dispatched to a terminal.

At terminal curbs, airport workers have even urged people waiting for taxis to try ride-hailing services instead.

“There clearly is a shortage of taxi drivers,” said Rick Cotton, the authority’s executive director. “Part of the coming back from the pandemic is the taxi drivers were decimated and they need to see that the passenger volume has come back to return to the roads.”

Sergio Cabrera, 57, who has owned and driven taxis for more than 20 years, was already hurting financially before the pandemic, losing passengers to the ride-hail cars that, he said, officials allowed to flood New York’s streets.

Mr. Cabrera said he had also been laid up for three months after getting sick with Covid-19. When he was able to return to driving, he said, he went hours without a passenger. He made grocery deliveries and took out a pandemic-related loan meant to help small businesses.

Mr. Cabrera said he was picking up about 10 passengers a day now, half of what he did before the outbreak.