It’s Tuesday. Was that a “Montauk monster” that washed up on Staten Island?

Weather: Sunny, with a high in the low 70s. The clouds move in at night, and temperatures dip into the low 60s. 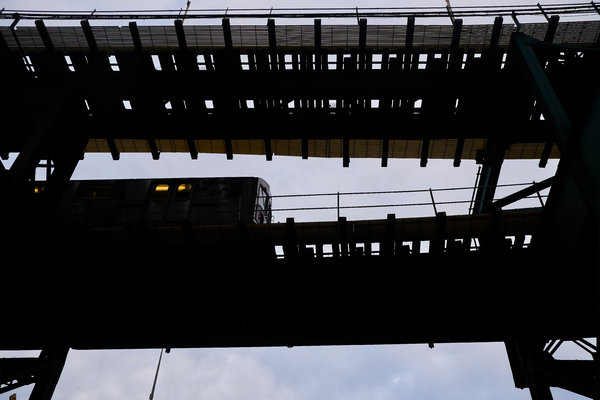 In New York City, few phrases are as common, or confusing, as “service change,” “planned work” or the curt and unforgiving “delays.”

Subway riders lived with them for years. Now they’re gone.

The Metropolitan Transportation Authority just replaced those generalities with more specific wording. It could help you plan your trip and save you time.

The new phrases are “part suspended,” “trains rerouted,” “local to express,” “express to local,” “stations skipped,” “slow speeds” and, because sometimes there is more than one change, “multiple impacts.”

(The MYmta app is a replacement for the SubwayTime app. A spokesman for the M.T.A. said third-party apps would reflect these changes in the future.)

What do those new phrases mean?

They are pretty self-explanatory, but the M.T.A. has details here.

Where will I see these phrases?

Riders can find service announcements on the M.T.A.’s website and app in a window called “service status.”

Why does the service status box look different?

The window now describes what is happening on individual train lines rather than on groups of lines.

In the past, if the F train was skipping a few stops in Brooklyn, the face of the box would say there was a service change on B, D, F and M lines. You had to click on that announcement to learn that only the F train was affected.

Trains are grouped by color into “trunk lines,” which are, roughly speaking, where trains operate in central Manhattan. The old updates based on trunk lines were helpful to some riders but not others.

Where else is detailed information available?

Some Twitter feeds are fire hoses of subway information, including @NYCTSubway and @SubwayStats.

How will we know if these changes make commutes better?

Subway riders are quick to comment on their experiences, so we should get lots of anecdotal evidence.

If you want help sorting through all that feedback, or just want a distraction, check in with @mta_mood on Twitter, which says it analyzes tweets to grade riders’ moods.

Jennifer Dulos: Blood found in the trash matches that of the missing Connecticut mother of five.

New York is a noisy city. One man got revenge.

The drummer Lawrence Leathers, a rising talent on New York’s straight-ahead jazz scene, was found dead after an assault.

[Want more news from New York and around the region? Check out our full coverage.]

Governor Cuomo will remain a registered voter in Westchester County through the primary, even though he is moving out of the home he shares there with his girlfriend. [Wall Street Journal]

The police have confiscated some very loud sound systems from motorists. [Gothamist]

Celebrate Eid al-Fitr, the end of Ramadan, at the Museum of the City of New York in Manhattan with crafts, snacks and henna. 11 a.m. [Free with $18 museum admission]

Fish, crabs, snails and other creatures arrive at the Wetlab at Hudson River Park in Manhattan. See the marine animals, participate in a raffle, have a snack and learn about local species. 4 p.m. [Free]

Pay homage to African, African-American and African diasporic food with culinary historians at Food for the Soul, at the Brooklyn Historical Society in Brooklyn Heights. 6:30 p.m. [$10]

The German author Benedict Wells presents his novel “The End of Loneliness” in a conversation with the critic Liesl Schillinger at the Goethe-Institut in Manhattan. 7 p.m. [Free]

And finally: He’s c-o-n-f-i-d-e-n-t about next year’s spelling bee

Last week, 562 students competed in the annual Scripps National Spelling Bee, and eight were crowned “co-champions.” None of the eight winners was from New York.

Of the students who participated, 36 were from the state, including seven from New York City.

How did they do?

A spokeswoman for the spelling bee, Valerie Miller, provided an u-p-d-a-t-e in an email.

Patricia Block-Sheehan of Staten Island was eliminated in Round 2, after omitting the first “i” in the word “parturition.” She was among the spellers ranked 519th (which was 519 places higher than I ever placed).

Olivia Meyer, Madhavendra Thakur, Charlie Kim and Nathaniel Wintraub — who study in Manhattan — as well as Adonis Cusu of Queens, were among the spellers ranked 51st.

According to Ms. Miller, they each “spelled correctly onstage in Rounds 2 & 3 – but didn’t have enough points to advance into the finals.”

Cianna Bazemore of Brooklyn was one of three spellers who dropped out of the competition at the start of Bee Week. Ms. Miller said she was unsure why.

But New York State has had no shortage of winners. In 1976, Tim Kneale of Syracuse won with “narcolepsy.”

In 2013, Arvind Mahankali of Queens won with “knaidel.”

Lately, the competition has gotten tougher. One former finalist and spelling bee expert said coaching companies like SpellPundit were altering the competition. (Six of this year’s eight co-champions used SpellPundit, The Times reported.)

But regardless, New York City’s schools chancellor, Richard A. Carranza, said in a statement that he was optimistic about a city student’s chances of winning the bee next year.

“As a lifelong Yankees fan, I know that the Big Apple produces champions,” he said. “I congratulate all of this year’s contestants, and I am c-o-n-f-i-d-e-n-t that NYC’s best spellers will shine even bigger and brighter in the years to come.”

We drove more than 200 miles to see our daughter run in the New York City half-marathon in March, stopping overnight on the way and waking up at 5 a.m. to get to the course on time.

Her group of runners was to leave Prospect Park at 8:10 a.m. and cross the Manhattan Bridge about five miles later. Her knee had been hurting and she wondered whether we should make the trip.

We parked at 88th Street, took the subway down to Canal Street and waited on the Manhattan side of the bridge, where the runners would turn toward the F.D.R. Drive.

As we waited, we tracked her progress on an app that showed us she was coming our way. We loved the wait. We absorbed New York City all over again: the cheerful encouragement of strangers, the Yankees and Mets caps on all kinds of people.

Then she arrived. We had told her to look for us to her left, where we would be waving her college flag. But we had ended up on the right. We called out to her, and she darted over and jumped to give me a high-five.

We walked as fast as we could to the Q train, took it uptown and emerged at 55th Street and Seventh Avenue. After meandering through the crowd and security checkpoints, we got to the finish line in Central Park. She crossed it just a few minutes later.