Good morning. Virus cases are falling more sharply in the U.S. than at any previous point. 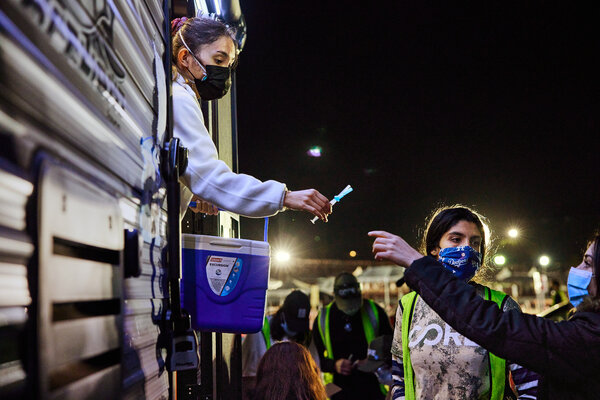 The United States has never experienced a sharp and sustained decline in new coronavirus cases — until, perhaps, now.

Last year, new cases in the U.S. went through cycles of rising rapidly and then leveling off or falling only modestly. That was different from the situation in many other countries, where sharp drops sometimes occurred. Look at how much bigger the declines were in Western Europe last spring and last fall than in the U.S.:

But now the situation may be changing.

New cases in the U.S. have fallen 35 percent over the past three weeks. Hospitalizations have dropped, as well. Deaths have not, but they have stabilized — and the death trend typically lags the cases trend by a few weeks.

“I like the trends we are seeing, and I am personally hopeful that things are going to get better,” Jennifer Nuzzo, an epidemiologist at Johns Hopkins University, told me. “But there are a number of things that could also wrong.”

Let’s start with two possible explanations for the recent improvement:

1. We may be in the very early stages of herd immunity. Roughly 100 million Americans seem to have had the virus. (For every person who tests positive, three more have had it without being diagnosed, studies suggest.) Another 24 million people have received a vaccine shot.

Put those two groups together, and you realize that about one-third of all Americans have at least some degree of immunity from the virus. That may be enough to begin — begin — slowing the spread, as my colleague Donald G. McNeil Jr. explained on “The Daily.”

2. More Americans may be wearing masks and staying socially distant. Many still are not, as I saw on my recent 1,600-mile road trip. But any increase in safe behavior matters.

And there are signs of change. Multiple states tightened restrictions late last year. The country just elected a president who echoes scientific advice rather than flouting it. Some Americans may also be inspired by light at the end of the tunnel.

“I’m hearing from a lot of people that one of the reasons why they’re really hunkering down now is that it would be a shame to get a severe Covid case while waiting to get the vaccine,” Dr. Lee Harrison, the chairman of a local health board, told The Pittsburgh Post-Gazette this week.

Dr. Mark Escott, who runs the a local health agency around Austin, Texas, told the CBS affiliate there: “Folks are changing behavior. Folks are wearing masks, folks are staying home, and that is resulting in these decreasing cases.”

Dr. Alex Garza, a member of a pandemic task force in St. Louis, told The Associated Press: “The fact that this is happening in the winter when respiratory viruses typically spread the most shows us just how effective all the preventative measures actually are when we use them.”

It could get worse again

I want to emphasize that the pandemic has not entered an inexorable decline.

The biggest reason for concern is the newly infectious variants that could cause case numbers to surge again, especially if people become blasé about masks and distancing — or the Biden administration fails to accelerate vaccinations. And the current rate of death from Covid-19 remains horrific.

But the U.S. has it within its power to make this month a true turning point.

Related: We asked readers of The Morning to tell us their questions about the vaccines — and Times reporters have answered them, covering the sign-up process, side effects and more.

President Biden signed a package of executive orders on climate change, including electrifying the government’s vast fleet of vehicles.

Biden said the measures would create millions of jobs. Many of those would be in the auto industry, he said, while others would come from the construction of energy-efficient homes.

“We’ve already waited too long to deal with this climate crisis,” Biden said. “We see it with our own eyes. We feel it. We know it in our bones. And it’s time to act.”

Much of the planet will endure climate-related extreme weather by 2040. This interactive shows the biggest threats that each country will face.

The State Department is pausing arms sales to the United Arab Emirates and Saudi Arabia that the Trump administration approved. Democrats have opposed the sales because of the countries’ involvement in Yemen’s civil war.

The Capitol Police union said the Jan. 6 riot had left nearly 140 officers injured, including some who suffered brain injuries or smashed spinal discs.

The Department of Homeland Security said the country faced a growing threat from “violent domestic extremists” emboldened by the Capitol attack.

A man accused of plotting to kidnap Gov. Gretchen Whitmer of Michigan last year pleaded guilty and agreed to testify against those accused of being his co-conspirators.

Europe is dealing with a vaccine shortfall, with Spain becoming the first E.U. country to partly suspend immunizations because of a lack of doses. “Tomorrow our fridges will be empty,” one health official there said.

New York City’s school enrollment fell sharply, mostly concentrated in early grades. Some parents say they are delaying sending young children to school because of the limitations of remote learning.

When public health workers transporting vaccine doses in Oregon got stuck in a snowstorm, they improvised to ensure that the shots wouldn’t go to waste: They vaccinated other stranded drivers on the spot.

Small investors on Reddit have banded together to send GameStop’s stock price soaring. As a result, hedge funds who bet against the troubled video game retailer’s stock are facing major losses. Matt Phillips and Taylor Lorenz explain. (Here are four more things to know about a weird few days for the stock market.)

In other business news, the electric carmaker Tesla reported its first profitable year, and Apple said it had surpassed $100 billion in quarterly sales.

A German court sentenced a neo-Nazi to life in prison for murdering a local politician in 2019. The prosecutor called it the country’s first political assassination by a far-right extremist since the end of World War II.

A near-total ban on abortion went into effect in Poland yesterday. Thousands of people protested.

In Thailand, Parliament voted to legalize abortion in the first trimester, though women who end a pregnancy after 12 weeks could still face prison or fines.

Amanda Gorman, who recited her poem “The Hill We Climb” at Biden’s inauguration, will perform at next month’s Super Bowl preshow.

A Morning Read: Victims of telemarketing scams in the U.S. lose a few billion dollars each year. Who is making all these scam calls?

Lives Lived: Cloris Leachman won an Academy Award for portraying a neglected housewife in the “The Last Picture Show.” But she was probably best known for getting laughs, notably in Mel Brooks movies, “The Mary Tyler Moore Show” and “Malcolm in the Middle.” Leachman has died at 94.

Orchestras are among the least racially diverse cultural institutions in the U.S. Black musicians accounted for 1.8 percent of the country’s orchestra players in 2014 (and there isn’t much data since then). Some large institutions are trying to change the situation, and a good place to learn is from the sustained efforts of smaller local organizations, Joshua Barone writes in The Times.

A crucial component is expanding the pool of musicians of color by nurturing young artists. In Detroit, Sphinx Organization mentors emerging artists and runs networking programs. Sphinx’s president recommends organizations dedicate 15 percent of their budget to diversity initiatives, for at least 10 years.

Another issue: Diversifying the ranks of composers. Over the past year, some orchestras have been programming more music by composers of color. Others are producing recordings of underrepresented composers. “If you don’t capture these things in real time in order to promote them, they will just happen and go away,” an executive at the Chicago Sinfonietta said.

Then there is the audience — which has also skewed white. To attract new fans, events need to become more accessible, Toyin Spellman-Diaz, a member of the wind quintet Imani Winds, told The Times. “Is there easy transportation to the hall? Is there child care? Is there food that everyone can afford?” she said. “You have to design events as opposed to concerts.”

The documentary series “Pretend It’s a City” chronicles the acerbic Fran Lebowitz through the lens of her longtime friend Martin Scorsese. Their pre-pandemic strolls through New York City give the episodes a wistful, bittersweet quality.

From show-business biographies to an environmental treatise by Elizabeth Kolbert, here are 13 books coming out in February.

The pangram from yesterday’s Spelling Bee was megabyte. Today’s puzzle is above — or you can play online if you have a Games subscription.

P.S. Cliff Levy, The Times’s Metro editor, has been named a deputy managing editor. He first will help oversee the paper’s audio department.

Today’s episode of “The Daily” is about the filibuster. On “Sway,” Kara Swisher interviews Ralph Macchio, the original Karate Kid.