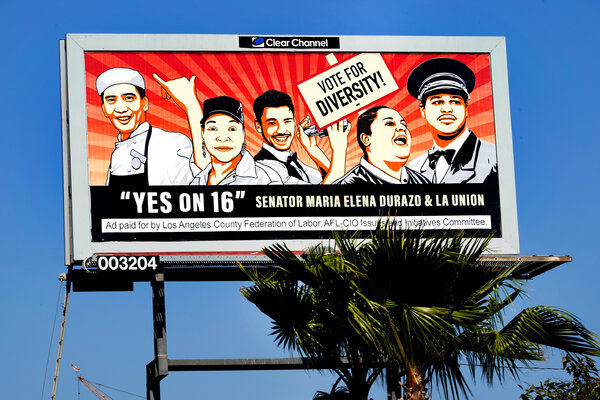 Affirmative action is one of those divisive subjects on which both sides can use polling to claim that their position is the popular one.

Polls that ask broadly about affirmative-action programs for racial minorities find most Americans to be in favor of them. Polls that specifically ask whether employers and colleges should take race into account when making decisions find that most Americans say no. These two patterns are contradictory.

But the contradiction disappears when affirmative action appears on the ballot. Again and again since the 1990s, voters have banned affirmative action. It’s happened in Arizona, California, Michigan, Nebraska, Oklahoma and Washington.

This year in California — America’s biggest blue state, where only 37 percent of the population is non-Hispanic white — progressive groups thought they had a chance to reverse the trend. They sponsored an initiative that would have repealed the state’s 1996 ban. And it lost in a landslide: 57 percent to 43 percent, based on the latest vote count.

“All 14 of California’s majority-Latino counties voted it down,” The Times’s Michael Powell notes. When forced to choose, most Americans evidently think that the policy is unfair and unlikely to benefit them.

Affirmative action’s losing streak is part of a larger issue for Democrats: America is more culturally conservative than progressives wish it were. Many voters — across racial groups — are moderate to conservative on affirmative action, abortion, guns, immigration and policing.

One option for Democrats is to keep doing what they’ve been doing, political costs be damned. Some progressives argue that each of the issues I just listed is a matter of human rights and that compromise is immoral. Ultimately, they say, the liberal position will become popular, as it did on same-sex marriage.

The other option is to assume that not every major political fight is destined to have a left-leaning resolution — and to look for ideas that are both progressive and popular. Such ideas certainly exist, including some that reduce racial inequities.

Typically, these ideas are economically populist and race-neutral on their face while disproportionately helping Black and Latino Americans, as Matthew Yglesias points out in his excellent new newsletter.

Medicaid expansion is one example. “Baby bonds” — federal grants for children, advocated by Senator Cory Booker of New Jersey — are another. A higher minimum wage is a third, the economists Ellora Derenoncourt and Claire Montialoux have explained. Florida this year voted for both a $15 minimum wage and President Trump.

“This is the challenge for liberal Democrats,” said Omar Wasow, a Princeton professor who studies race and politics. “In a diverse society, how do you enact politics that may advance racial equality without reinforcing racial divisions that are counterproductive and hurt you politically?”

A new study found that immunity to the coronavirus may last for many years.

The F.D.A. approved a rapid test that can be performed at home, paving a potential path for more widespread testing outside of health care settings.

More states placed new restrictions, but some stopped short of closing restaurants, as some states and Europeans countries have done. Ohio said all retail businesses must close from 10 p.m. until 5 a.m. for three weeks, while Maryland ordered bars and restaurants to close at 10 p.m. Illinois will suspend indoor dining starting Friday, and Pennsylvania will require anyone who enters the state to be tested before arrival.

Vermont banned “multi-household gatherings,” and its governor, Phil Scott, argued that those gatherings had led to more infections than restaurants. “I know this is difficult & frustrating, especially with the holidays right around the corner, but it’s necessary,” Scott tweeted.

Dr. Anthony Fauci, the U.S. government’s top infectious disease expert, said that the nation needed “a uniform approach” to the pandemic, rather than a “disjointed” state-by-state response.

Senator Chuck Grassley of Iowa, an 87-year-old Republican, said he had tested positive. His absence shattered his pride and joy: the longest consecutive voting streak in Senate history.

Fans are crediting Dolly Parton as a pandemic savior because she donated $1 million this spring to Vanderbilt University, which worked with the drugmaker Moderna to develop a vaccine.

President-elect Joe Biden is planning a “climate administration.” His aides are drafting orders to reduce pollution and seeking nominees who will embed climate policy across the government.

Trump fired Christopher Krebs, the head of the agency in charge of election security. Last week, the agency called the election “the most secure in American history.”

Republican officials refused to certify Biden’s win in Detroit — only to reverse themselves after an outcry from the city’s voters and state officials.

Rudy Giuliani asked the Trump campaign to pay him $20,000 a day for legal work challenging the election results. The campaign appears to have said no, and Giuliani denied requesting that much.

Alaska voters approved ranked-choice voting for general elections, which makes it easier to vote for a third party without undermining a major-party candidate.

In The Times Magazine, Jonathan Mahler argues that Trump will soon present the country with a historic dilemma: an ex-president with substantial criminal liability.

Mars, the maker of M&Ms and Snickers, will acquire the company that makes Kind bars. The deal is a bet on snacks that market themselves as healthy.

Theo Epstein — who built the Chicago Cubs and Boston Red Sox teams that ended long championship droughts for both franchises — stepped down as president of the Cubs. He said he planned to join another team eventually.

Torrential rains and back-to-back typhoons have ripped through the Philippines in the past two weeks, turning a once picturesque river into a sea of murky brown and setting off deadly landslides. The Times takes a photographic look at the impact in one province.

Conan O’Brien will end his TBS show in June after 28 years doing nightly television. He will host a weekly variety show on HBO Max.

A Morning read: A Trump presidential memoir would most likely sell millions of copies. But publishers fear that authors and staff members could revolt if they sign him, and that his book would test the limits of fact-checking and accuracy.

From Opinion: In the “Covid-free world” of Nova Scotia, where tight lockdowns and border closures limited the spread of the virus, life goes on much as it did a year ago, Stephanie Nolen writes.

Lives Lived: A bricklayer’s son, Sheldon Solow built a Manhattan real estate empire from scratch, joining developers like Harry Helmsley and Larry Silverstein in putting a stamp on the city’s skyline. He died at 92.

The rise of a new musical genre: hyperpop

Listening to a hyperpop song for the first time can be a jarring experience. It sounds a bit like a fun-house mirror version of pop, full of energetic, glitchy vocals. The music mixes elements from dance, emo, punk and rap.

Last year, Spotify certified hyperpop as a budding musical genre by creating a playlist by the same name. The music is often made by young, internet-savvy artists who have grown up on platforms like SoundCloud and Discord, exposing them to many kinds of independent music and a creative DIY spirit. The genre also has a close association with the L.G.B.T.Q.+ community, and many of its top artists are queer or transgender.

Spotify created its playlist after noticing that an experimental, genre-defying debut album by a duo named 100 gecs had attracted a loyal following online. Two other emerging stars are both 15 years old: osquinn and glaive. (Lower-case letters appear to be common in the genre.)

“Hyperpop is a parody of pop,” the playlist’s main editor, Lizzy Szabo, told Vice. “It almost pokes fun and pushes the bounds of that kind of quirky, traditional, radio popstar sound.” Ben Dandridge-Lemco in The Times tells the fuller story of hyperpop.

Ina Garten’s cacio e pepe cheese puffs, to munch on while reading this profile about her.

The new anthology “African American Poetry: 250 Years of Struggle and Song,” edited by Kevin Young. It’s full of poems on topics both dark and full of joy, from injustice to rapturous odes to music and food.

Try “Dear Ex,” a 2018 Taiwanese comedy-drama that follows a professor’s teenage son, wife and male lover in the aftermath of his death.

Read about Deuxmoi, an Instagram account that shares anonymous tips about A-listers and is the new outlet of choice for the celebrity-obsessed.

The late-night hosts had a lot to say about Giuliani.

The pangram from yesterday’s Spelling Bee was avalanche. Today’s puzzle is above — or you can play online if you have a Games subscription.

P.S. From The Onion: “Governors Call On Gretchen Whitmer To Shut Down Their States So Residents Won’t Get Mad At Them.”

Today’s episode of “The Daily” is about the rise, fall and resurrection of the Taliban.

Claire Moses, Ian Prasad Philbrick and Sanam Yar contributed to The Morning. You can reach the team at [email protected].