Britain’s Parliament is set to hash out Brexit, the U.S. and the Taliban agree in principle to a peace framework, and France is debating the conduct of its police officers. Here’s the latest: 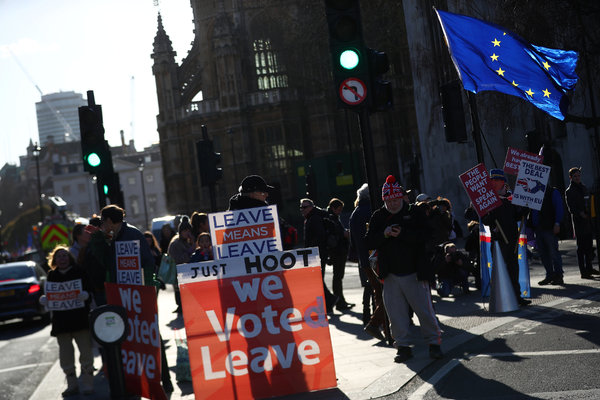 The British Parliament is expected to vote today on a number of amendments to Prime Minister Theresa May’s plan that could end up shaping how the country departs from the E.U.

How it works: Various lawmakers, including those in opposition parties, have proposed more than a dozen changes to the wording of Mrs. May’s exit plan. Only the speaker of the House of Commons, John Bercow, can decide which will be voted on. The voting is for the most part not binding, but Mrs. May will be under political pressure to adopt popular measures.

What are the amendments? There is a broad range. The most hyped could delay Britain’s departure from the bloc for a few months or even until the end of the year if there is no deal. That would blunt Mrs. May’s best cudgel: the clock.

What does it all mean? At the very least, the competing proposals should give Parliament a better idea of the kind of Brexit that would get wide support and perhaps even work.

Tesco: Contending with competition from discount retailers and bracing for a possible Brexit shock, the largest grocer in Britain by market share said it was planning to cut thousands of jobs.

The U.S. and Taliban agree to a potential peace framework

Officials from both parties agreed in principle to the outlines of a preliminary peace deal, the chief U.S. negotiator, Zalmay Khalilzad, told our reporter in Kabul. The agreement is the biggest step yet toward ending the 17-year Afghan conflict.

Terms: U.S. negotiators said the deal would include a Taliban guarantee that Afghan territory would not be used for terrorist activity. The withdrawal of American troops would be contingent on larger concessions from the Taliban, including a cease-fire and direct talks with the Afghan government — concessions the insurgent group has rejected in the past.

Behind the scenes: President Trump is eager to leave Afghanistan, but Defense Department officials, convinced he does not grasp the complexities of the war, are warning that a full withdrawal could lead to a terrorist attack on the U.S. within two years. And Afghan officials are increasingly suspicious that Mr. Trump will make a deal with the Taliban behind their backs.

Eyes and hands are lost as France cracks down on protesters

Dismay and rage are rising in France about the police response to months of protests by the Yellow Vest movement. Protesters’ grievous wounds have been making headlines for weeks, and critics say the government has become downright repressive.

Developments: On Saturday, Jérôme Rodrigues, a well-known figure in the Yellow Vests, suffered an eye injury, apparently from a rubber projectile and a so-called dispersal grenade, as he was streaming live video on Facebook of a protest in Paris. “He will be handicapped for life,” his lawyer said.

Context: Yellow Vest protests have mixed peaceful demonstration with violent looting, fire-setting and attacks on the police. But in Europe, only France and Northern Ireland use projectile guns loaded with rubber balls that can seriously maim. President Emmanuel Macron’s government has ignored calls to stop using them, arguing that the police response is justified by the level of chaos.

In numbers: Since the revolt began in November, 11 people have died and 1,200 law enforcement officers have been injured. Among protesters there have been 1,900 injuries, 109 of them serious — including 18 who were blinded in one eye and four who lost a hand. An internal police group has opened 101 inquiries into use of force.

In May, Ireland voted decisively in a historic referendum to end one of the world’s most restrictive abortion bans and instead allow unrestricted abortion up to the 12th week of pregnancy. But women seeking abortions still face major roadblocks in the strongly Catholic country.

Newly emboldened anti-abortion activists have been massing outside clinics and even creating fake ones, emulating a tactic used by American activists in which women are lured inside and harangued about their choice. Doctors and hospitals worried about the stigma have been slow signing up to provide abortion services.

Looking ahead: Abortion rights groups fear they can already see the sprouts of a sustained movement to overturn legal abortion, including the establishment this month of an anti-abortion party.

Russia investigation: In a highly unusual statement, Matthew Whitaker, the acting U.S. attorney general, said that the special counsel, Robert Mueller, was nearing the end of his investigation into Russian interference in the 2016 presidential campaign and whether the Trump campaign cooperated with Moscow.

U.S. politics: President Trump cast doubt on the prospects for a bipartisan deal over his demand for a border wall by the Feb. 15 deadline and said he would use contentious emergency powers to fund the wall if an agreement could not be reached.

Spain: The Prado Museum in Madrid is a cultural jewel, offering one of the finest collections of paintings in Europe. On its 200th anniversary, an exhibition running through March charts how the museum has navigated the convulsions of Spanish history.

Pope Francis: The pope tried to tamp down expectations for a global meeting at the Vatican next month on child sexual abuse in the Roman Catholic Church, saying it was mainly intended to educate bishops and other church leaders.

Huawei: The U.S. Justice Department unveiled sweeping charges against the Chinese telecom firm Huawei and its chief financial officer, Meng Wanzhou, outlining a decade-long attempt by the company to steal trade secrets, obstruct a criminal investigation and evade economic sanctions on Iran. The U.S. also said it would seek to have Ms. Meng extradited from Canada, where she was detained last year at its request.

Venezuela: The Trump administration imposed sanctions against Venezuela’s state-owned oil company, cutting off the main source of cash for the government of the embattled president, Nicolás Maduro.

Carlos Ghosn: American securities regulators are now also scrutinizing Nissan Motor, whose former chairman is accused by the Japanese authorities of financial misconduct. Mr. Ghosn, who denies all allegations, has been refused bail multiple times and could remain in a Tokyo jail for months, which is not unusual in a country where prosecutors wield enormous power.

A swastika in Thailand: A 19-year-old Thai singer wore a T-shirt with Nazi iconography during a performance, reviving concerns over the lack of awareness of the Holocaust in Asia.

Recipe of the day: A classic Italian combination of sausage and peppers becomes an easy dinner with the addition of broccoli and pasta. (Our Five Weeknight Dishes newsletter has more recipe recommendations.)

How to get motivated if you don’t feel like running.

As the British Parliament prepares to vote on proposed amendments to Prime Minister Theresa May’s Plan B for Brexit, retailers are warning that a no-deal withdrawal from the E.U. could lead to higher prices and empty shelves.

And some entrepreneurs are offering survival-themed products, like the Brexit Box. Costing nearly 300 pounds, it includes a water filter, fire-starting gel and 30 days of freeze-dried food.

The fears recall Y2K, the so-called Millennium Bug, which threatened to wreak havoc when computer systems encountered Jan. 1, 2000, a date many had not been programmed to understand.

“Even those of us who have not filled the bathtub with emergency water, withdrawn extra cash from the bank and stocked up on food will be entering the new millennium sobered by the awareness that unknown problems of our own making are an enduring part of existence.”

Inyoung Kang, an editor based in London, wrote today’s Back Story.

Check out this page to find a Morning Briefing for your region. (In addition to our European edition, we have Australian, Asian and U.S. editions.)

Sign up here to receive an Evening Briefing on U.S. weeknights, and here’s our full range of free newsletters.