We’re covering the potential elimination of a no-deal Brexit option, dissatisfied protesters in Hong Kong and a divisive redesign of Gare du Nord. 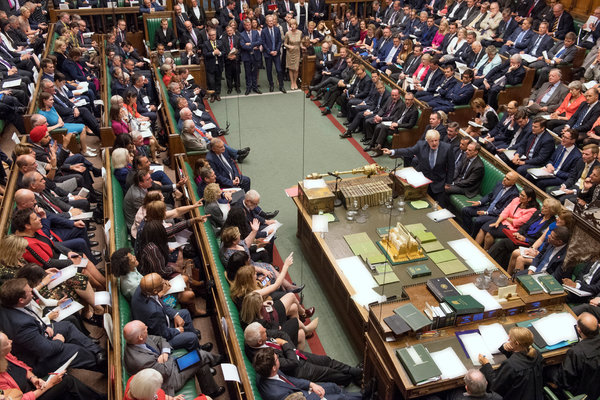 The British Parliament voted to take a no-deal Brexit option off the table, in what has been a sobering week for Prime Minister Boris Johnson. That bill now goes to the House of Lords.

Then lawmakers rejected Mr. Johnson’s request for a snap election — at least until the no-deal measure becomes law and there is no threat of a clear majority reversing this week’s actions. It was the third rebuke in two days of Mr. Johnson.

Keep in mind: An eventual election, which will likely happen in the coming weeks or months, may raise more questions than it solves. An inconclusive result could reinforce fears that the problem defies a democratic solution.

Analysis: This week ushered in a new season of political mayhem in Britain, one in which the voters are now as likely as their feuding leaders to resolve the questions over how and when Britain should leave the European Union.

In the room: Members of the unelected House of Lords brought food, drinks and bedding to Westminster in preparation for a session that could run not just through Wednesday night but through Thursday, too.

Announcing his new cabinet, Prime Minister Giuseppe Conte of Italy ended what news reports here had called “the craziest crisis in the world.”

In his new coalition, the Five Star Movement is flanked by the center-left Democratic Party — sworn enemies turned unlikely bedfellows — as well as the small, left-leaning Free and Equal party.

The government is set to be formally sworn in this morning, and must face a confidence vote, expected later this week, which is seen as a formality.

Troubles ahead: The Democrats and Five Star do not see eye-to-eye on several issues, including foreign policy (with Five Star showing friendliness to Russia and China) and migration. They also disagree on a high-speed train line between Italy and France.

Go deeper: The appointment of Roberto Gualtieri of the Democratic Party to oversee the economy seemed to signal the new government’s desire to strengthen its international image, after a year of flouting the European Union’s budgetary restrictions.

The announcement on Wednesday by the territory’s leader, Carrie Lam, that the government would formally withdraw a contentious extradition bill was too little, too late for many in the territory’s protest movement.

Some experts suggest that Beijing had a hand in Mrs. Lam’s concession, and that withdrawing the bill is a tactical gamble to “calm down the movement’s moderates” and isolate its radicals, particularly in the approach to celebrations next month of the 70th anniversary of the founding of the People’s Republic.

Context: Mrs. Lam had already suspended the extradition bill, but the government could have brought it back with just 12 days’ notice. Formally withdrawing it is far more consequential, as the bill’s sponsors would have to start all over again to reintroduce it.

Leading architects have denounced a 600 million euro plan for Europe’s largest train station, calling the designs that would turn it into a glassy, mammoth, restaurant-filled shopping mall “indecent,” “absurd” and “unacceptable.”

While the station has been criticized as dark and dysfunctional, some critics argue that the increased size and forced routing through shops and restaurants, much like airports route passengers through duty-free shops, increase travel time and hassle.

Facial recognition: A British court ruled that the police use of systems that scan and identify people’s faces in real time doesn’t violate privacy and human rights. The closely watched case is one of the first to address the technology.

Jeffrey Epstein: A trove of sealed court records names hundreds of people who are connected to the financier, and one unnamed man has already asked a judge not to release the documents. He argues it could damage their reputations.

Kashmir: A 16-year-old boy died on Tuesday, weeks after witnesses said security officers aiming at protesters hit him in the face with buckshot. It was the first protest-linked death confirmed in the region since the Indian government revoked its autonomy.

Snapshot: Above, the Abaco islands in the Bahamas. Hurricane Dorian finally pulled away, and 20 people have been confirmed dead, while thousands are at risk. It is now churning off Florida, threatening to swamp much of the Southeast U.S. coast.

Viking ships: Two of Norway’s greatest cultural treasures, the preserved Viking longships Oseberg and Gokstad, survived sea voyages and the passage of time, but surging tourism — more than 500,000 people visit their display annually — might be their toughest battle.

How to calm a squirrel: Researchers found that squirrels pay attention to the background chatter of birds, and that they relax a bit when the birds sound relaxed. This kind of eavesdropping is widespread in nature, including among lizards.

What we’re reading: This Financial Times article. Our senior economics correspondent Neil Irwin had his tongue in his cheek when he posted on Twitter: “Apropos of nothing in particular, here is a story about Oxford in the era of Boris Johnson and the Brexiteers, a place ‘shot through with dilettantism, sexual harassment and sherry.’”

Watch: Normani and her choreographer, Sean Bankhead, talk about “Motivation,” inspirations and showing the world her dance chops at the V.M.A.s.

Listen: The duo 100 gecs’s debut album, “1000 gecs,” smashes dozens of rapid-fire reference points into something genuinely new and exhilarating. We made it a Critic’s Pick.

Smarter Living: Raising children can be hard — and physically dangerous. Our Parenting editor’s toddler stabbed her eye with a pointy toy, and doctors say broken ankles from tripping over playthings are common. A pediatrician says the best defense is awareness of kids’ unpredictability. Keep babies’ razor-sharp nails trimmed, be wary when your face is near theirs, and — men especially — watch out when older kids learn to swing a racket or a bat.

And our tech adviser shows how easy it is to turn a tablet into a portable art studio.

The languages of Hong Kong

When Carrie Lam, Hong Kong’s chief executive, released a major announcement on Wednesday, she made the video statement in Cantonese and in English. At news conferences, she responds to reporters’ questions in whichever of the two languages they ask.

That’s the norm in the territory — at least for now.

Dozens of languages are spoken by Hong Kong’s richly mixed population, but most are not official. For most of the 156 years of British colonial rule, English was the only sanctioned language. In 1974, Chinese was added. But which?

There are many Chinese languages and dialects. Most Hong Kongers had come from the neighboring Chinese province of Guangdong, once known as Canton, so Cantonese is what Hong Kong officials most often pair with English.

But Mandarin, China’s national language, is growing. Migration from the mainland surged following Britain’s handover in 1997, and Mandarin is now a language of instruction in many schools and all but mandatory in many jobs.

Its increasing presence is part of the “Mainlandization” that the Hong Kong protesters are fighting.

Thank you
To Mark Josephson and Eleanor Stanford for the break from the news. Andrea Kannapell, the briefings editor, wrote today’s Back Story. You can reach the team at [email protected]

P.S.
• We’re listening to “The Daily.” Our latest episode is on the Democratic presidential race in the U.S.
• Here’s today’s Mini Crossword puzzle, and a clue: Race with a baton (five letters). You can find all our puzzles here.
• All readers, regardless of whether they are paying subscribers, have full access to articles from our Reader Center and videos on our collection page.