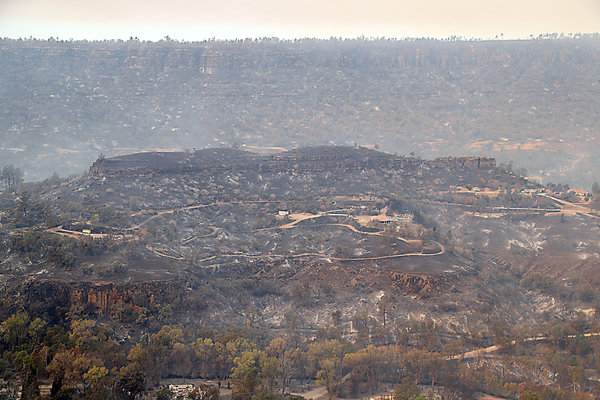 1. What started the California wildfires?

Investigators are searching charred rubble left by the deadly Camp Fire for clues. The fire caused at least 56 deaths, with hundreds more missing, and destroyed more than 10,000 homes and businesses.

But the search has been slowed by the ferocity of the blaze. Above, Paradise, Calif.

One line of inquiry, an investigator told us: Was the culprit an electrical problem like a fallen power line? Officials have found that the main electric utility in the region was responsible for at least 17 of 21 major fires in Northern California last fall. And the utility declared that it could face crippling liability bills, potentially leaving customers on the hook for billions.

Wildfires pose the greatest risk in areas where housing and nature meet, our Climate team writes, and those zones are attracting increasing numbers of Americans.

If the discontent spreads, Mrs. May’s leadership position could be in danger. But she remained unflappable, even amid reports that another minister was considering leaving.

“Am I going to see this through?” she said at a news conference at the end of the day. “Yes.”

Across social media, posts mixed ridicule and frustration with the country’s latest political crisis. On Twitter, #brexitchaos and #brexitshambles were top trends.

How did this all happen? Why is it taking so long? We have answers, in our guide to Brexit for the non-Brit.

3. Regulators stopped short of a ban on flavored e-cigarettes, and will allow stores to continue selling them from closed-off areas inaccessible to minors.

But the F.D.A. said it would pursue a long-range plan to outlaw menthol cigarettes and flavored cigars.

Both efforts are clearly aimed at restricting products that entice young people to vape and smoke.

“Almost all adult smokers started smoking when they were kids,” said the agency chief.

The plan to restrict e-cigarettes rather than ban them outright came as a surprise — details of a stronger proposal leaked out over the past week. Lawyers said a ban would have faced protracted court battles.

Our health team has answers to questions about the health effects of e-cigarettes.

4. The Trump administration announced sanctions against 17 Saudis accused of being involved with the killing of the dissident journalist Jamal Khashoggi in Turkey.

The sanctions came just hours after Saudi Arabia’s public prosecutor said he was requesting the death penalty for five suspects in the case. Above, a memorial for Mr. Khashoggi.

The prosecutor also said the 15-man team sent to confront Mr. Khashoggi had orders to return him to the kingdom, but decided on the spot to kill and dismember him — shifting the kingdom’s narrative yet again and contradicting Turkish and U.S. findings.

5. The high cost of poor handwriting.

As the Florida Senate race headed for a hand recount, a judge ruled to give voters with sloppy penmanship a second chance.

Thousands of ballots were invalidated because voters’ signatures didn’t match signatures on file. Now they’ll have a little more time to confirm their identities.

“There are dozens of reasons a signature mismatch may occur,” the judge explained. And indeed, one study found that younger voters were more likely to have their mail-in ballots rejected — partly because they didn’t use handwriting enough to develop a steady signature. Above, preparing for a recount in Palm Beach, Fla.

In the race for governor, Ron DeSantis, the Republican candidate, appeared to have enough votes to avoid an additional recount. By the end of the day, he led Andrew Gillum, the 39-year-old Democratic mayor of Tallahassee, by a margin of 0.41 percentage points. About a dozen lawsuits have been filed in efforts to extend deadlines, impound equipment and count mailed ballots that were rejected.

6. Nancy Pelosi is the favorite to be the next speaker of the House. Asked if she had the 218 votes necessary to win a vote by the Democratic caucus, she was emphatic: “Yes.”

But a possible challenger may be emerging.

Representative Marcia Fudge, an Ohio Democrat, said she is considering a run.

Older women in the caucus almost universally support Ms. Pelosi, above, our congressional reporter writes, but some younger newcomers — especially centrists from states won by President Trump in 2016 — see a need for a new generation of leadership.

7. Yellowstone National Park is famous for stunning geysers and big game that attract four million visitors a year. The park has played a pivotal role in the preservation of bison, gray wolves and grizzly bears.

But the warming climate has brought changes so quickly that plants and animals may not be able to adapt.

Our journalists used photographs and time-lapse video to capture how shorter winters and hotter, drier summers are already altering the landscape.

8. Thanksgiving is a week away.

Still haven’t chosen wine for your feast? Rest easy. Our wine critic has a guide to tasty and widely available picks that will fit nicely into the menu. Above, a Manhattan wine shop.

Red or white? You want both, he writes, with good acidity, lower in alcohol and under $25 a bottle.

It isn’t Taylor Swift or Justin Bieber, or even Luis Fonsi.

Despite the international reach of those stars, the most-watched channel on the video service belongs to T-Series, an Indian music label and film production company. Above, Guru Randhawa.

Its videos have been seen 53 billion times, and the channel gains over 100,000 subscribers a day, thanks in part to a rapidly growing online Indian viewer base.

10. Finally, it’s a happy first for the National Football League.

Jeff Rohrer, a linebacker for the Dallas Cowboys in the 1980s, is to marry his partner, Joshua Ross, this weekend in Los Angeles.

Mr. Rohrer is the first known N.F.L. player to be part of a same-sex marriage.

“I’ve given at least five people heart attacks with this news,” he said, but added: “My closest friends, including some of my former teammates with the Cowboys, could not have been more happy and supportive.”

Have a joyous evening.