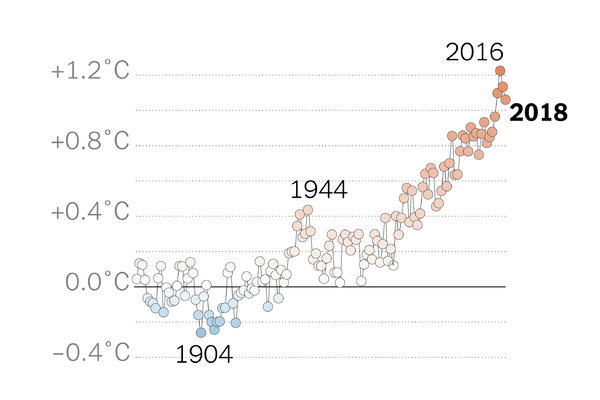 Last year was the fourth hottest on record

NASA scientists announced that the Earth’s average surface temperature for 2018 was more than one degree Celsius above the average of the late 19th century — among the highest in nearly 140 years of record keeping.

The trend is unmistakable. The last five years have been the five warmest on record.

“We’re no longer talking about a situation where global warming is something in the future,” said the director of the group that conducted the analysis. “It’s here. It’s now.”

Analysis: What sets the recent warming apart from the past is its relative suddenness and its clear correlation with increased levels of greenhouse gas emissions produced by human activity.

A reminder: To avoid the most catastrophic consequences of climate change, scientists have said that global temperatures must not rise by more than two degrees Celsius above preindustrial levels (meaning those in the era before the Industrial Revolution, when humans began pumping carbon dioxide into the atmosphere).

Even an increase of 1.5 degrees will have dire consequences, a U.N. report has found, but despite a global climate compact, it appears likely that Earth’s temperatures will rise beyond the two-degree threshold.

A new picture of the fashion industry’s exploitations in India

A new report has found that a large chunk of India’s garment manufacturing industry takes place in unregulated settings, with many workers earning as little as 15 cents per hour.

As in the rest of India’s informal economy, most are women of low castes, Muslims and other religious minorities who lack access to the country’s social security systems, education and other opportunities.

Details: Of the 1,452 workers interviewed for the study, about 76 percent started working from home because of “some form of duress,” including severe financial hardship, family pressure or lack of alternate income. None belonged to a trade union; almost all were paid less than the minimum wage.

Background: India is the world’s second-largest manufacturer of fashion garments after China. Around 13 million people officially work in the industry, but millions more work from home. Such informal segments have become a cornerstone of the fast-fashion supply chain around the world.

Australian officials confirmed that they had revoked permanent residency for Huang Xiangmo, a Beijing-linked developer who has lived in Sydney since 2011, in a widening conflict over Chinese influence. They also rejected his citizen application.

Background: Mr. Huang was leading an organization connected to the Chinese Communist Party that promotes Beijing’s foreign policy when he donated millions of dollars to both major parties. He also financed a think tank run by a former Australian foreign minister who has been reliably pro-China.

Though foreign donations are legal in Australia, Mr. Huang has drawn increasing suspicion that reflects a deeper skepticism of China’s efforts to shape Australian policies.

Mr. Huang has denied that his donations have been tied to Beijing.

What’s next? Mr. Huang has the right to appeal, but in the meantime, he is stranded overseas. It’s also unclear whether his family can stay in Australia.

A day after President Trump denounced “ridiculous partisan investigations” in his State of the Union speech, Speaker Nancy Pelosi declared that the House Democrats wouldn’t back down from holding his administration accountable.

“It’s our congressional responsibility, and if we didn’t do it, we would be delinquent in that,” she said.

Fellow Democrats immediately pushed ahead with several inquiries, including one focused on Mr. Trump’s tax returns.

Catch up: Here are our takeaways from Mr. Trump’s speech and a fact check of his claims.

North Korea: The president revealed that he planned to sit down with North Korea’s leader, Kim Jong-un, on Feb. 27 and 28 in Vietnam. A senior American negotiator, Stephen Biegun, has arrived in Pyongyang to sort out the crucial details.

Progress toward the denuclearization of North Korea has stalled since Mr. Trump first met with Mr. Kim in Singapore in June.

Go deeper: The State of the Union put the Democrats’ resurgence on full display, from the striking sea of white attire to their reluctance to applaud the president, writes our chief Washington correspondent.

India: A government religious board that initially opposed allowing women into the centuries-old Sabarimala Temple reversed course, saying women have the right to worship there.

China: At least eight people were killed and seven wounded in a knife attack in the northwest Gansu Province as the country was celebrating the Lunar New Year. The local police said the attacker, who had been drinking, confessed and said he was seeking revenge for his wife’s affair.

Brexit: Prime Minister Theresa May heads to Brussels today to try to salvage her plan to leave the E.U. On Wednesday, the president of the European Council said there was a “special place in hell” for those who promoted the British withdrawal without offering a credible plan.

Siemens: E.U. antitrust authorities blocked the German company’s plans to merge its train unit with Alstom of France, killing a deal that was pitched as a counterbalance to competition from China’s entry into the European market.

Russia: Alarmed that the Trump administration scrapped a Cold War-era arms control treaty, President Vladimir Putin warned that his country was working on developing new “hypersonic” missiles that could travel more than five times the speed of sound. But some experts see a bluff, noting that Russia can’t afford an arms race.

Did a seal eat your thumb drive? A biologist in New Zealand discovered a USB drive in the feces of a leopard seal and is trying to find the owner of the vacation photos and videos on the memory stick.

Recipe of the day: Treat yourself to a homemade bistro dinner with blue-cheese hanger steak and endive-herb salad.

Strenuous exercise may protect our heart from some of the problems it helps cause.

A recent letter to the editor took The Times to task for not running enough letters from women. We asked one of the letters editors, Sue Mermelstein, to explain how The Times responded.

The fact that our letters page skews male is something we’ve struggled with. The letter from Kimberly Probolus gave us a perfect opportunity to address it. When we published it, we also urged more women to write, and committed to work toward parity.

We’ve already seen an uptick in correspondence from women, thoughtful and telling. “It has never occurred to me that someone would want to hear my voice,” one said.

Men and women alike expressed concern that we might begin selecting letters on the basis of gender rather than merit. We won’t, but we are inviting letters from a broader range of readers, via newsletters like this one, the Reader Center and The Times’s social media.

This weekend we plan to publish readers’ thoughts on why women are underrepresented in opinion pages.