Nicole Barthelemy, the quiet, gracious owner of one of Paris’s premier cheese shops on the Rue de Grenelle, told me this week, with real panic in her eyes, “I have never in 47 years been so afraid as I am today.” And with good reason. Only a few blocks away, on the Rue de Solferino, around the corner from the Musée d’Orsay, in the building where I’ve lived off and on since 1981, two barricades were built on this quiet residential street. One was set ablaze last Saturday and burned for hours. 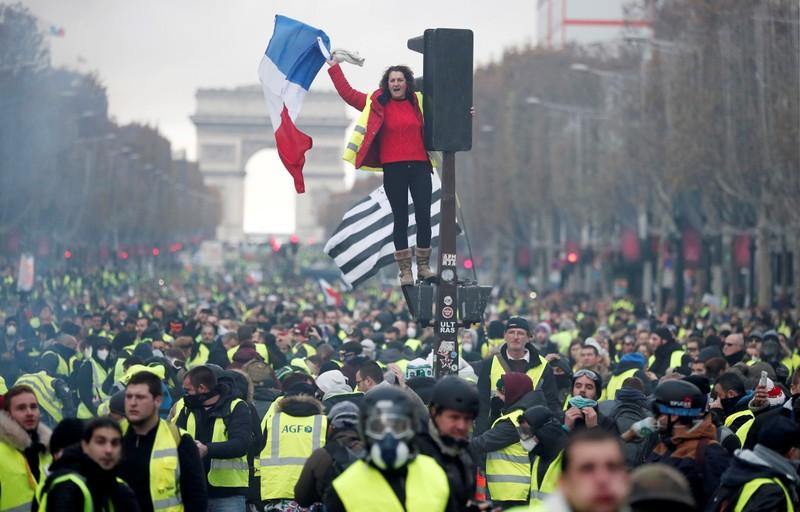 But while Madame Barthelemy and I may need to dodge scattered clouds of tear gas launched by France’s redoubtable gendarmerie, President Emmanuel Macron is fighting for his political life. At least for the moment, his vision for his country and for Europe seems increasingly disconnected from the people who elected him. Tens of thousands have taken the streets to demonstrate their displeasure. And that’s what is stoking fear among Barthelemy and millions more.

It’s not hard to find reasons for this sudden unraveling of the grand ambitions of the youngest French leader since Napoleon. Macron’s visions for this future appear increasingly disconnected from anything France, even Europe, has known or at least for the moment even wants.

“We must do away with this little political world which functions only for itself,” Laurent Tinois told the French daily Le Monde. A public works department laborer in northern France, he is a local leader of the movement known as the “gilets-jaunes” for their yellow vests, which all French motorists must keep in their cars for emergencies. The gilets-jaunes, and the hooligans or “casseurs” (breakers) who have ridden along like pilot fish, have been at the center of weeks of unrest. Tinois’s views echo those of hundreds of thousands who have demonstrated and rioted across the nation.

The revolution of the yellow vests has become more of a political movement for utter social change than an economic issue of taxation, which was the spark that set off this firestorm of protest. So, on Tuesday, when Prime Minister Édouard Philippe went on national television to announce a six-month suspension of a gas tax increase, the outrage over the sop of halfway measures was palpable.

Tinois voted in the last election for Macron’s left-wing opponent Jean-Luc Mélenchon. Other protesters admitted to voting for a range of Macron opponents, from Mélenchon on the left to far-right leader Marine Le Pen. All have taken advantage of this movement to press their disparate desires – new parliamentary elections, even Macron’s resignation. Much of this political action seems designed to re-run last year’s vote that swept Macron and his new political party into office with a landslide and what appeared to be an unchallengeable mandate. Though, as is now becoming apparent, this was hardly so clearly-cut. Thousands stayed away from the polls because they saw little they really liked and now they seem to be venting their anger in the streets.

As someone who has observed how French presidents back to Charles de Gaulle dealt with the protests that erupted from even the narrowest change in direction, I feel Macron had little real understanding of the nation he was seeking to transform. France is effectively a giant ocean liner, lumbering straight ahead. But Macron arrived in the pilot house and immediately tried to make a sudden turn in direction. The move to the barricades to protest taxes and inequalities should have been entirely predictable to anyone familiar with the nation’s history.

While barricades date to the 16th century in France, the French Revolution in 1789 was the first time such a show of resistance led to the beheading of a French king, Louis XVI, and his wife, Marie Antoinette. The barricades went up again in times of turmoil like the 1848 revolution, and in 1968 they began in the Latin Quarter with a student rebellion that spread quickly to workers and farmers alike before De Gaulle restored order by threatening to resign. Back then, not an insignificant threat.

This time, the revolution threatens to spread again. In the wake of vast rioting and pillaging along the Champs-Elysées, thousands of high-school students have gone out on strike across the country, at times battling police as they protest the curriculum changes that are part of Macron’s education reforms. In front of the National Assembly in Paris, just minutes from my apartment, scores of ambulances have blocked traffic for hours, sirens blaring, hundreds of drivers protesting rules that discriminate against small individual ambulance companies in favor of a few behemoths.

Faced with an inchoate and leaderless, though powerful, movement, and having moved too quickly with his reforms, Macron’s easy fix of suspending the gas tax increase first for six months, then for all of 2019 may be insufficient. He’s also dug in his heels on upholding his repeal of the surtax on the wealthy that Socialist President Francois Mitterrand initiated three decades ago. “We will never unravel anything we’ve done over the past 18 months,” Macron declared to a session of his cabinet Wednesday evening. Macron’s reversal of this tax led many to brand him “president of the rich.”

Of course, Macron has had reasons – intellectually quite brilliant – for each of his fiscal moves. The gas tax was designed to pay for a post-carbon France. Ending the wealth tax was designed to lure British bankers driven from London by Brexit. But none of this is immediately apparent to French provincial workers, many of whom squeak by on the minimum wage of around 1,500 euro ($1,700) a month to feed their families and buy gas to get to work in a countryside with little public transport. There really are two Frances – rich and poor, but especially urban and rural. Now both seem to be united in their revolt – and fear for their future.

With no one organized to negotiate on the other side, the government has found no solution – beyond putting more military force on the streets – for what promises to be another Saturday of chaos and violence. But France’s president faces a crisis different from any other Western leader. Macron’s is a vast peasant uprising that requires a whole new set of nuanced political tools if he is to neutralize this unrest before it lurches utterly out of control.