Democratic governments are rarely popular for extended periods, and often have to scrape by with low polls, noisy demonstrations and constant pressure from the media. And though authoritarian regimes can squash dissent and muzzle the news, they too face rising discontent. These patterns aren’t new, but now they happen as administrations of every kind are under increasing, and new, pressures – and the challenge of recession looms. 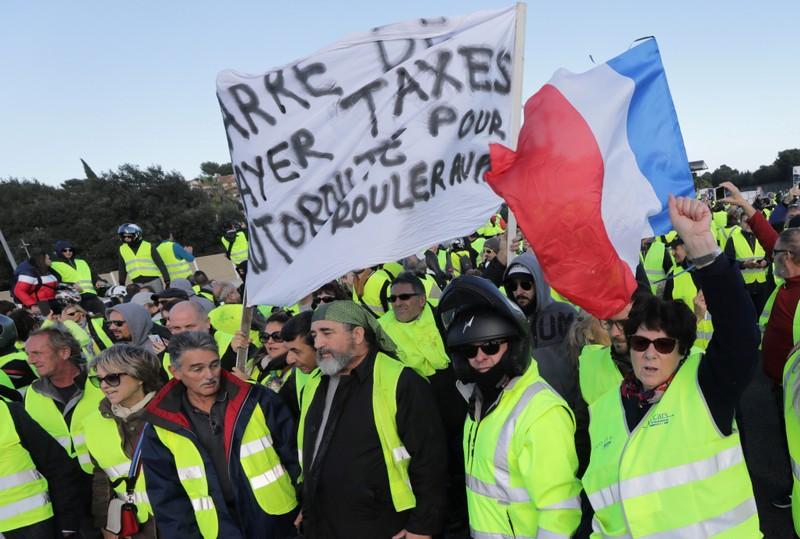 In the democratic world, France is the present exhibit A. Some 300,000 of its citizens wearing yellow safety jackets came out in force last weekend to protest quite hefty fuel price rises. The numbers went down to around 10,000 after several days of demonstrations, but a planned blockade of Paris this weekend will show if the protests are deeply felt enough to last, or have been a one-off show of dissatisfaction.

French President Emmanuel Macron is presently held in low esteem: an early November poll showed the candidate he beat to become president, Marine Le Pen of the right-wing National Rally, formerly known as the National Front, is two points above him in voting intentions for the European parliament elections next May.

Many of the French protestors are from rural areas and small towns, where public transport is scanty. The protests often underscore the theme that the centrist Macron is the “president of the rich,” unworried by several rises in fuel prices – measures the government says are designed to prompt a shift to more environmentally friendly vehicles. Faced with the choice between cleaner air or lower prices, the protestors choose the latter – and at least one poll shows that 73 percent of the country supports them.

Where there is some space for protests in authoritarian states, people use it – often, too, manifesting a determination to protect living standards. In Russia, “trust” in President Vladimir Putin has sunk to 39 percent. “Approval” of the president is higher, at 67 percent in September, though a drop from 82 percent six months earlier. The major reason is another sharp rise – this time in Russia’s retirement age, from 60 to 65 for men and 55 to 60 for women. As Macron can point to his once-popular pledge to run a “green” government, so Putin can show that the plunging population of Russia has left too few economically active workers supporting too many retirees. But still they come on to the streets.

In Egypt, the falling popularity of the military dictator Abdel Fattah al-Sisi stems from austerity measures he introduced in 2016 after a $12 billion IMF loan specified cuts and other painful reforms. This year he won the presidential election with 97 percent of the vote; the other candidate had made it clear he was a Sisi supporter. Egyptian voters, knowing dissent can be savagely punished, had nowhere else to go. Abstention was the real protest, with the turnout at 41 percent – even lower than the 47 percent who went to the polls in the previous presidential election.

In China, protest is tightly suppressed as President Xi Jinping continues to press the Communist party to both spread his political thoughts – now formally written into the constitution – to every one of China’s vast, 1.4 billion population, and to ensure that control be as total as possible. Growth is still over 6 percent – but that is significantly lower than in the past several years, and is still falling. Xi seems to be anticipating unrest as budgets are cut and is raising defenses ahead of time.

Economic slowdowns always have social and political consequences, sometimes violent. A new recessionary period is confidently predicted, and probably soon. The Economist noted last month that “the IMF thinks growth will slow this year in every other [than the United States] big advanced economy. And emerging markets are in trouble.” When that happens, countries both free and unfree are likely to struggle to contain the effects.

The rise of populism exacerbates this. Populists don’t just introduce tougher immigration rules and prompt revolt against liberal institutions; they give shape and organization to deep chasms in both rich and emerging economies. In the latter category, last month’s election of the former army officer Jair Bolsonaro as president of Brazil is testament to a large nation, governed by the left for more than a decade, now expressing its fear of rampant crime, disgust over a corruption scandal enveloping the former Workers’ Party administration and discontent caused by the country’s dismal economic performance.

In Brazil, as in France, the United States, Italy, the UK and beyond, the haves and have-littles regard each other with mutual incomprehension, often with contempt. It’s most evident in the United States because President Donald Trump likes to stir it up – as he did before the congressional midterm elections by stoking fears about Central American migrants heading for the United States. But it doesn’t end there. Populism’s best energy comes from a refusal to acquiesce in the inequities of the world – once a motor force of the left, more often now found on the right.

At times, the success of the national populists render the formation of government itself impossible – as in Sweden today, where neither the center-left nor the center-right coalitions can govern without support, but both refuse to make a deal with the far-right Sweden Democrats, who hold the balance of power with almost18 percent of the vote.

Nor will these social chasms be filled, even where populist administrations fail. The distance is not just between the parties, but among the citizens – one which will only get larger when recession comes, and challenges institutions like the euro, still inadequately protected by a more integrated euro zone economy. It will also attack central banks, which have lowered interest rates to or near zero and have few shots left in the locker.

Commentators, scholars and politicians call for new beginnings, new parties, new policies. But the required trust doesn’t exist for broad, radical, cross-community action in democracies. And in authoritarian societies, repression will have to be ratcheted up to heights we have not been recently used to see, to keep a clamp on protest. Failing a recovery of trust, real trouble will come.

(John Lloyd co-founded the Reuters Institute for the Study of Journalism at the University of Oxford. His books include “What the Media Are Doing to Our Politics” and “The Power and the Story.” He is a contributing editor at the Financial Times and the founder of FT Magazine.)