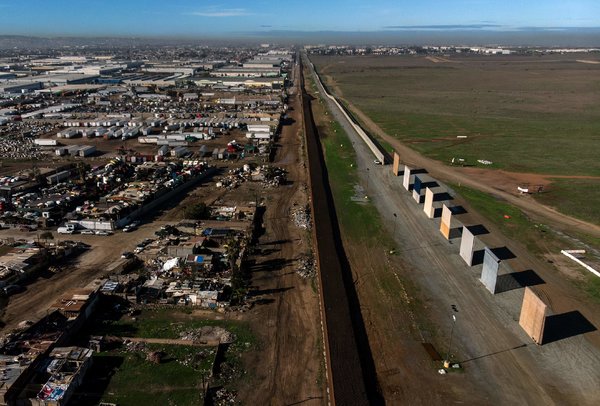 President Trump is to address the nation tonight

The president plans to speak from the Oval Office at 9 p.m. Eastern to discuss what he calls a crisis at the border with Mexico, and the need to address it before a partial government shutdown can end. Mr. Trump’s demand of $5.7 billion for a border wall is at the heart of a budget impasse that has led to the second-longest shutdown in U.S. history.

Today, Democrats in the House plan to start the process of passing individual appropriations bills to reopen the government, beginning with legislation that would fund the Treasury Department, including the I.R.S.

Notable: In making his case for a wall, Mr. Trump has said his predecessors in the Oval Office had admitted to him that they should have built the barriers themselves. But all of the living former presidents say that’s not true.

Explainer: The White House has raised the idea of invoking emergency powers to build the wall without lawmakers’ approval. We examined how that might work.

The Daily: In today’s episode, a Times reporter who covers immigration discusses the situation at the southwestern border.

Many of the 800,000 federal workers who have been furloughed or who are working without pay won’t get paychecks this week, as the effects of the shutdown ripple across the economy.

To soften the blow, the Trump administration directed the Internal Revenue Service on Monday to issue tax refunds during the shutdown, reversing previous policy.

Impact: Our correspondent in Florida visited Marianna, a deeply conservative town in the Panhandle. Federal prison workers there were already struggling after Hurricane Michael struck in October. “It’s just too much,” one prison guard said of the shutdown.

The details: Here’s what is and isn’t affected by the shutdown.

John Bolton tries to salvage a situation he helped create

So, after protests from Congress and concern from allies, it was up to Mr. Bolton to talk his boss into slowing down the pullout, senior administration officials said.

Catch up: Senator Lindsey Graham, a South Carolina Republican, said over the weekend: “The president is slowing down and is re-evaluating his policies in light of those three objectives: Don’t let Iran get the oil fields, don’t let the Turks slaughter the Kurds, and don’t let ISIS come back.”

If you have 4 minutes, this is worth it

Since President Rodrigo Duterte of the Philippines began an antidrug campaign in 2016, the country’s prison system has become one of the most overcrowded in the world.

The Times visited the Manila City Jail, where the guards are so outnumbered that gangs keep the peace.

Uptick in emissions: U.S. carbon emissions rose 3.4 percent in 2018, the biggest increase in eight years, according to a preliminary estimate published today. The rise came despite a near-record number of coal plants in the U.S. being retired last year.

North Korean leader in China: Kim Jong-un arrived in Beijing today for a four-day visit. The trip comes as negotiations are underway for a second summit meeting between Mr. Kim and President Trump.

World Bank resignation: The organization’s president, Jim Yong Kim, is leaving in February, nearly three years before the end of his term. His departure could set up a fight between the Trump administration and other governments over a replacement.

California’s new governor: Gavin Newsom was sworn in on Monday, pledging to focus on huge economic disparities in the state.

Ginsburg misses arguments: Justice Ruth Bader Ginsburg, who underwent cancer surgery last month, was missing from the bench on Monday for the first arguments since the Supreme Court returned from a four-week break.

The Trump administration: Mick Mulvaney, the acting White House chief of staff, has been exploring the possibility of becoming president of the University of South Carolina.

Carlos Ghosn’s defense: In his first public appearance since his arrest nearly two months ago, the former Nissan chief accused of financial misconduct said today that he was innocent.

Late-night comedy: Stephen Colbert was among the hosts who returned on Monday from a holiday break: “I am excited to announce that after a 17-day shutdown, I am reopening ‘The Late Show.’ I held my ground, because I kept my promise and built a wall of mashed potatoes, around my midsection, over the Christmas holidays.”

What we’re listening to: This “In Our Time” podcast from the BBC. Lauretta Charlton, our Race/Related editor, notes that the program has been on the air for two decades. “Lord Melvyn Bragg and his guests do a brilliant job of helping make sense of the world,” she writes. “I highly recommend this episode on the Long March, Mao Zedong and the Red Army. The bonus material at the end is especially compelling, on the price women in the revolution paid for liberation.”

Read: For the 20th anniversary this week of the premiere of “The Sopranos,” its creator, David Chase, spoke about the show’s legacy and its endlessly dissected ending.

Watch: “Surviving R. Kelly” is a six-part documentary about the R&B singer, who has faced accusations of child and sexual abuse for decades. Our reviewer says the series “underscores the theme of accountability — not just of Kelly or his many personal enablers, but of us all.”

Quiz: Answer 25 questions in our feature, created in 2013, to see your personal dialect map.

Smarter Living: Drawing can have a big impact on what you remember. The three-act process of picturing something in your mind, putting pen to paper, and looking at what you drew outperforms other memorization tricks.

Handily, we have tips to find a great fountain pen. We also look at the devices that are likely to dominate (or invade) your life this year.

A prize for an Arabic novel

One used fantasy techniques to expose the “brutality inherent in society.” Another looked at the “secret life” of Mecca, depicting the Islamic holy city in Saudi Arabia as rived with crime. Yet another narrated the travels of a medieval Sufi mystic.

All were winners of the International Prize for Arabic Fiction. The “longlist” of contenders for the 2019 prize was announced today.

Arabic is an ancient language that has a rich tradition of oral storytelling and poetry, but the adoption of the novel is relatively recent. Few Arabic novels are translated, and fewer still are distributed in the West.

The prize is funded by the Department of Culture and Tourism of Abu Dhabi, in the United Arab Emirates. Some call it the “Arabic Booker” because the Booker Prize Foundation in Britain supports the award. (The administrators discourage the nickname.)

The author of the winning novel, to be announced in April, will receive $60,000, as well as funding for having the work translated.

Here are some previous winners available in English.

That’s it for this briefing.

Yesterday, we misstated the number of times Brian X. Chen had attended International CES. This is his 11th consecutive year, not 10th.

See you next time.

Thank you
To Andrea Kannapell, the briefings editor, for compiling our cultural recommendations, and to James K. Williamson for curating Smarter Living. Ben Hubbard, our Beirut bureau chief, wrote today’s Back Story. You can reach the team at [email protected]

P.S.
• We’re listening to “The Daily.” Today’s episode is about President Trump and the situation at the southwestern border.
• Here’s today’s mini crossword puzzle, and a clue: Shade of light purple (5 letters). You can find all our puzzles here.
• The Times translated the detailed investigation about the death of a Palestinian medic into Arabic.

Chris Stanford is based in London and writes the U.S. version of the Morning Briefing. He also compiles a weekly news quiz. He was previously a producer for the desktop home page and mobile site, helping to present The New York Times’s news report to readers. Before joining The Times in 2013, he was an editor and designer at The Washington Post and other news organizations. @stanfordc