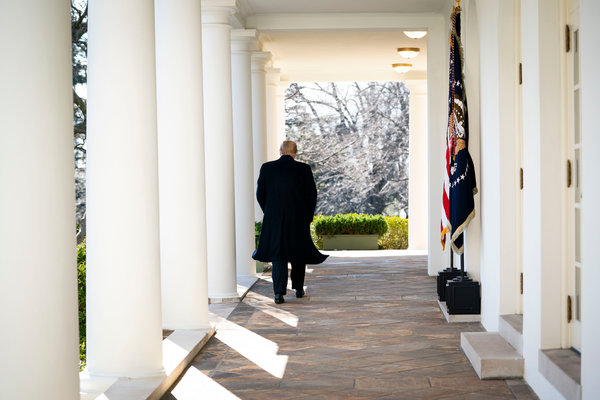 1. Our team of Washington reporters uncovered a secretive layer of President Trump’s public war on the investigations encircling him, particularly that of the special counsel, Robert Mueller.

They interviewed dozens of current and former government officials and others close to Mr. Trump and reviewed confidential White House documents, finding numerous unreported episodes of pressure and intimidation over the last two years that may expose him to accusations of obstruction of justice.

Their published report, at 4,500 words, is our most-read article today.

Separately, House Democrats are investigating an administration effort to bring nuclear power plants to Saudi Arabia despite repeated warnings that potential conflicts of interest around the plan could put U.S. security at risk.

2. Sixteen states have banded together to challenge President Trump’s declaration of a national emergency at the border, setting up a constitutional clash over the scope of presidential emergency powers.

Their lawsuit argues that the president doesn’t have the power to divert federal funds to build his promised border wall because Congress controls spending. House Democrats are also gearing up to confront the president. Above, workers reinforcing a section of the border fence near Tijuana, Mexico.

Our limited-run weekly newsletter, Crossing the Border, offers a deeper understanding of an issue that seems to have taken over the U.S. political agenda.

The Vermont senator announced his 2020 presidential campaign, a bid that will test whether he can retain the anti-establishment appeal he enjoyed with liberal voters in 2016. A self-styled democratic socialist, Mr. Sanders believes his policy ideas now have support from many more Americans, including Medicare for all, a $15 minimum wage and tuition-free public colleges. Above, Mr. Sanders at the Iowa State Homecoming Parade in October.

4. Egyptian officials detained a veteran Times correspondent and forced him back to London without explanation, in an escalation of a severe crackdown against the news media under President Abdel Fattah el-Sisi.

In another case, the photojournalist pictured above, Mahmoud Abou Zeid, was due to be released in September after five years in prison but remains in detention.

The Times correspondent, David Kirkpatrick, a former Cairo bureau chief, was denied entry at the Cairo airport and held without food or water for seven hours. His phone was confiscated. Eventually, he was escorted on a plane back to London, where his passport was finally returned.

5. American teachers have mounted the most sustained educator protest movement in decades — and it doesn’t show any signs of stopping.

Teachers walked out of classrooms again in West Virginia on Tuesday, above, helping to kill a bill that would have allowed tax dollars to pay for private school tuition and established charter schools in the state for the first time. Those in Oakland, Calif., plan a strike for Thursday.

We look at the resilience of a movement that has grown from demanding higher wages and benefits for educators to a broader push for school reform.

6. The Roman Catholic Church confirmed that it has general guidelines for what to do when clerics break celibacy vows and end up fathering children, a growing issue that strikes at the heart of the Vatican’s culture of secrecy.

It appears to be the first admission that such a practice existed. The children are often a result of affairs, though some are the product of rape or abuse. Above, Vincent Doyle, the son of a priest.

Some of these children are among those descending on Rome to press their cause during the Vatican’s unprecedented meeting this week on the child sexual abuse crisis.

Separately, Southern Baptists announced plans to address sexual abuse in the wake of an investigation by The Houston Chronicle and The San Antonio Express-News. The reporting revealed that nearly 400 Southern Baptist leaders had been accused of sexual misconduct or crimes against more than 700 victims since 1998.

7. What if stemming the tide of misinformation on YouTube means punishing some of its biggest stars?

It’s a question vexing the platform as it tries to rein in bad actors with a new recommendation algorithm. Instead of aiming to maximize the amount of time users spend on the site — rewarding those who traded in viral stunts and baseless rumor-mongering — the company says it is trying to reduce the spread of “borderline content and content that could misinform users in harmful ways.”

And harmful, our tech and culture columnist notes, is a circular notion: “A conspiracy theory is harmful if it results in harm — at which point it’s often too late for platforms to act.”

That was the witty, highly recognizable Karl Lagerfeld, the most prolific designer of the 20th and 21st centuries. He died in Paris at the age of 85, after a career that reshaped the fashion industry.

As the creative director at Chanel since 1983 and Fendi since 1965, Mr. Lagerfeld, above in 2002, achieved an unparalleled level of fame. He also created a new kind of designer: a shape-shifter, reinventing heritage brands with dollops of pop culture, our chief fashion critic writes in his obituary.

Virginie Viard, the creative studio director at Chanel, will take the helm of the fashion house.

9. Our Opinion section has been looking at how the events of 1919 shaped the modern era.

Consider jazz: A century ago, many in the U.S. considered it no more than a novelty. But then the famed Harlem Hellfighters 369th Infantry regiment marched through Manhattan during celebrations over the end of World War I. All ears were on its band, above.

Led by Lt. James Reese Europe, an immensely successful and well-known African-American musician, the band — and its renown abroad — surfaced in nearly every account of the parade, writes David Sager, a research assistant at the Library of Congress, jazz historian and jazz trombonist.

Between that and a young cornetist named Louis Armstrong, he argues, 1919 “was the year jazz came into its own.”

10. Finally, we end with a touch of wanderlust.

For his second destination in a yearlong journey, our 52 Places Traveler landed on the Pacific Coast of Panama and found himself daydreaming about being swallowed up by the little town of Santa Catalina. (He got us dreaming, too.)

“I could find a new rhythm, dictated by when the waves were good for surfing and the visibility was good for diving,” he writes, “in a place where even the Wi-Fi takes things slow, restaurant menus depend on what’s been caught that day and everything is just quieter.”

Have an imaginative night.