We’re covering the protests in Hong Kong, a World Cup record for the U.S., and the rancher who set off California’s largest wildfire. 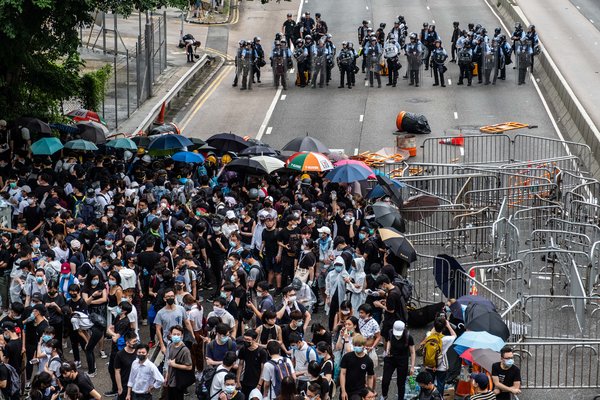 Riot police officers used pepper spray and water cannons today in a bid to disperse the tens of thousands of protesters who had gathered around the legislature to stop lawmakers from debating a plan to allow extraditions to mainland China.

The protesters are also calling for more open elections in the semiautonomous Chinese territory. “Hong Kong is a civilized city, but they don’t listen to the citizens,” said Grace Tsang, 25.

The mass demonstrations have delayed the process, but they are unlikely to prevent the law from being enacted, as pro-Beijing lawmakers hold 43 of the legislature’s 70 seats. Follow our live updates.

Photographs: See scenes from the protests this week.

Explainer: The extradition proposal has produced some of the largest shows of dissent in the city in years. Here’s why.

Democratic leaders announced a landmark agreement on Tuesday that would strengthen rent laws and tenant protections, and abolish rules that allow building owners and landlords to deregulate apartments and raise rents.

The deal was a significant blow to the real estate industry, which had argued that the measures would deteriorate the condition of New York City housing.

Closer look: The changes come as New York and other major cities grapple with a shortage of affordable housing, even prompting Democratic presidential hopefuls to court renters as a new voting bloc.

Trump and Mexico are still at odds over pact

President Trump waved a piece of paper on Tuesday that he said was part of a “very long and very good” secret agreement with Mexico. He refused to describe the deal.

His comments came a day after Marcelo Ebrard, Mexico’s foreign minister, publicly denied having reached an immigration deal with the U.S. “We don’t have anything to hide,” he said, adding that there was no accord beyond what was announced on Friday: that Mexico had negotiated 45 days to demonstrate that its own immigration measures would work.

Related: The trade war between the U.S. and China has a new battlefront: the $1.6 trillion U.S. travel industry. Commerce Department figures show a sharp decline in the number of Chinese tourists, who spend nearly twice as much as other foreign visitors.

Thirteen goals. Only one team scored.

The U.S. team began its quest for another Women’s World Cup title in record-setting fashion on Tuesday, with a 13-0 rout of Thailand.

It was the first time that a team had scored 13 goals in a World Cup game — men’s or women’s — and the margin of victory was the largest for a match in either soccer tournament.

The result left many of Thailand’s players in tears. The U.S. coach, Jill Ellis, said, “I don’t find it my job to harness my players and rein them in, because this is what they’ve dreamed about, and this is a world championship.” The U.S. faces Chile on Sunday.

Catch up: In Tuesday’s other matches, the Netherlands beat New Zealand, 1-0, and Sweden defeated Chile, 2-0.

What’s next: We’ll have live coverage when France plays Norway today at 3 p.m. Eastern. The day’s other action includes Nigeria versus South Korea, and Germany versus Spain.

It began last summer, when a rancher spotted an underground wasp nest and tried to plug the hole by driving a metal stake into the ground. The sparks resulted in a blaze that became part of the 460,000-acre Mendocino Complex Fire, a newly disclosed investigation found.

The rapid kindling is a testament to the extreme fragility and volatility of the American West, experts say.

Telecom merger: The proposed $26 billion deal between Sprint and T-Mobile hit a roadblock on Tuesday when a group of state attorneys general sued to block it.

Hung jury in border trial: The case of an Arizona teacher who helped migrants resulted in a mistrial after jurors couldn’t decide if his actions were a crime.

Alabama’s chemical castration law: The state is the latest to set the stringent parole condition for certain sex offenders. Here’s a guide to the procedure.

In memoriam: Gabriele Grunewald, an elite runner, gained the support of thousands for her perseverance in facing cancer. She died on Tuesday at 32.

Protesting Birthright: Free trips to Israel have become a rite of passage for many American Jews. But some young Jewish activists say the journeys, organized by a nonprofit to foster an emotional connection to Israel, erase the experiences of Israeli Arabs and Palestinians in the West Bank.

Horse deaths in California: Gov. Gavin Newsom called for all animals to be evaluated by independent veterinarians before racing at Santa Anita Park.

Snapshot: Above, the island of Texel, part of the Frisian archipelago along the coasts of the Netherlands, Germany and Denmark. In his latest dispatch, our 52 Places traveler finds it to be a place of quiet charms.

What we’re reading: These essays in The Columbia Journalism Review. “These critiques of the international coverage of the 30th anniversary of Tiananmen are brutal,” writes Alicia P.Q. Wittmeyer, a gender editor in the Opinion section.

Cook: Turn beet dip into a full meal with a dollop of labneh, and warm pita and cucumbers for dipping.

Go: A new Off Broadway play aims to make sure Toni Stone, the first woman to play big-league professional baseball, is no longer a footnote to history. The play is in previews at the Laura Pels Theater in Manhattan.

Eat: At Crown Shy in Manhattan, the only false step is the restaurant’s name, our critic writes.

Smarter Living: More than a million women each year take medication while breast-feeding their babies, but we know little about the effect on infants. Some sedatives like Xanax or Valium should be used cautiously, and it’s a good idea to avoid over-the-counter allergy, cold and sleep medications.

And it’s looking like no single food regimen can work for everyone.

Former President George Bush will achieve a sliver of immortality today, when the U.S. Postal Service unveils his commemorative “Forever” stamp, on what would have been his 95th birthday.

But don’t cash out your retirement savings: The speculative market for so-called first-day cover stamps “has all but collapsed,” according to Apfelbaum, a stamp sales and appraisal firm in Pennsylvania. Why? “There are just too many stamps to collect and not enough time or money.”

Modern stamp collectors view the first U.S. presidential stamp to be one featuring Abraham Lincoln that was released in 1866, a year after his assassination.

But Fred Baumann of The American Philatelist writes that the stamp, the first 15-center and chiefly used to send letters to France, has no inscription or dates marking it as commemorative. Well-preserved examples now sell for upward of $1,000.

That’s it for this briefing. We hope it got your stamp of approval.

Thank you
Chris Stanford helped compile this briefing. Mark Josephson, Eleanor Stanford and Kenneth R. Rosen provided the break from the news. Victoria Shannon wrote today’s Back Story. You can reach the team at [email protected]

P.S.
• We’re listening to “The Daily.” Today’s episode is about a far-right politician in Italy, part of our series about the rise of nationalism and populism in Europe.
• Here’s today’s Mini Crossword, and a clue: Feeling of irritation (5 letters). You can find all our puzzles here.
• The Times has added Tiles, a pattern-matching game, to its lineup of daily puzzles.

Inyoung Kang is an editor and producer based in London. @inyoungk