A setback for Trump’s immigration plan

A federal judge ordered the government to resume accepting asylum claims, regardless of where or how applicants enter the U.S. The decision will impede President Trump’s attempts to block a group of Central Americans from crossing the border.

Mr. Trump signed a proclamation on Nov. 9 that banned migrants from applying for asylum if they failed to make the request at a legal checkpoint. U.S. immigration laws stipulate that foreigners who touch American soil are eligible to apply for asylum and cannot be deported immediately.

• What it means: The ruling may only temporarily block the Trump administration’s policy.

• A long wait: Some of the migrants recently reached Tijuana, Mexico, where their shelter has taken on the qualities of an overwhelmed refugee camp.

How China became a leader in innovation

Our series about the country’s rise as a global superpower turns to its ambitions in the tech world.

China has mastered the art of manufacturing everything, and of doing so quickly on a mass scale. It now wants to develop companies that build cutting-edge products to rival Apple and Qualcomm, and the Communist government is willing to put the full financial weight of the state behind the tech industry.

In some cases, China has outpaced the U.S. Beijing’s decision to heavily censor and regulate the web has not stopped internet companies from thriving, and the country is years ahead of the U.S. in replacing paper money with payments through smartphones.

• Catch up: Read the previous installments in our series.

• Analysis: A dispute between Beijing and Washington over language at a major trade meeting signaled a tense new phase in relations between the two powers.

California is battling some of the worst wildfires in its history, alongside drought, extreme heat waves and degraded air quality. But that may represent the beginning of how climate change will create simultaneous crises. According to new research, by the end of the century, some parts of the world could face as many as six climate-related disasters at the same time.

Issues like heat waves, hurricanes and flooding are interconnected, and they might continue to come in combination if the effects of climate change are unchecked, the research suggested.

• Looking ahead: As wildfires in California become more frequent and more destructive, insurers are becoming reluctant to renew some homeowners’ policies.

• Behind the story: Our reporter worked tirelessly covering a mass shooting in Thousand Oaks, Calif. Then she was ordered to evacuate because of the wildfires.

The last open Senate seat is in Mississippi, where a special election has become a test of racial politics.

Cindy Hyde-Smith, the Republican nominee, seemed set for an easy victory against Mike Espy, an African-American Democrat. But a video showed her praising a supporter by saying that if he invited her “to a public hanging, I’d be on the front row.” As she has ducked reporters and refused to apologize, her lead in the polls has shrunk to just five points.

• Midterm sting: Republicans capped a popular deduction to pay for President Trump’s tax cut. That may have done more to hurt than help candidates in high-tax districts.

• 16 rebels: A group of Democrats went public with their opposition to re-electing Representative Nancy Pelosi as House speaker.

A warning for the world in Bosnia

Long after a vicious civil war was halted in the 1990s, ethnic divisions in Bosnia remain entrenched. The city of Mostar, for instance, has two of everything: two fire brigades, two hospitals, two bus stations and two nightclubs, one of each for Catholic Croats and Muslim Bosniaks.

The rigid split reflects larger ethnic fissures, which have only hardened since the 1995 agreement and have been exploited by politicians touting nationalist rhetoric.

• What it means: The divisions serve as a stark warning to the West as it struggles with the rise of ethnonationalism. 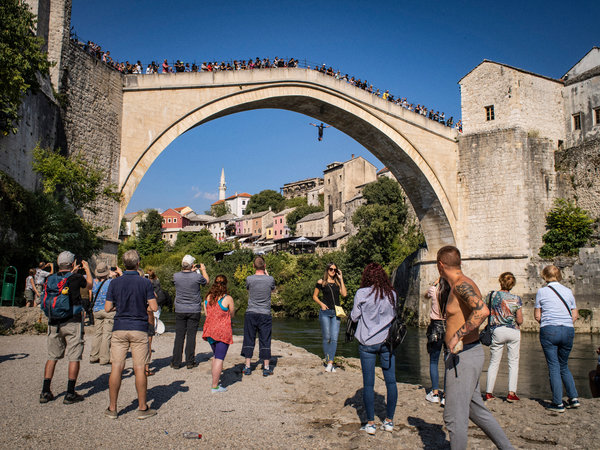 Listen to ‘The Daily’: Why U.S. Bombs Are Falling in Yemen

• Technology stocks drove a market slump that has now erased November gains. It comes as investors’ confidence has been shaken by revelations about privacy and security issues. The sell-off extended into Asia this morning, sending markets broadly lower. (Here’s a snapshot of how things stand today.)

• Carlos Ghosn, the Nissan chairman, was arrested after an internal investigation by the company found that he had underreported his income to the Japanese authorities for several years.

• Jim Acosta of CNN had his White House press pass restored after a two-week standoff with the Trump administration.

• Being good at talking to people requires curiosity, according to the NPR host Terry Gross.

• Black Friday shoppers: Here’s a cheat sheet of the products to track.

• Recipe of the day: Get into baking with no-knead bread.

A police officer, a doctor and a pharmacy employee were among those killed at Mercy Hospital, according to Mayor Rahm Emanuel. The gunman also died.

The killing of the aging mobster in prison has created an unusual mystery at the Hazelton penitentiary in West Virginia, where there were two assailants and a prison full of suspects.

The editors of The New York Times Book Review selected the year’s notable fiction, poetry and nonfiction. On the list are “Dopesick,” Beth Macy’s harrowing account of the opioid epidemic, and Rachel Kushner’s new novel, “The Mars Room.”

• Forty years of the Science Times

On Nov. 14, 1978, The Times published its first weekly section on health and science. In honor of the anniversary, our science editors asked 11 questions on some of the most pressing issues in science, including some that are better left unanswered.

Jimmy Fallon previewed the turkey-pardoning ceremony taking place at the White House today, which includes a public vote: “You could tell the turkeys want to drag it out as long as possible, because today they asked if that vote could happen in Florida.”

• Quotation of the day

“It’s worth pointing out there is no scientific support for inevitable doom.”

— Kate Marvel, an associate research scientist at the NASA Goddard Institute for Space Studies, on whether humankind can survive climate change.

• The Times, in other words

Here’s an image of today’s front page, and links to our Opinion content and crossword puzzles.

The top end of the art market is booming.

At auctions last week, masterworks by Edward Hopper and David Hockney sold for more than $90 million each.

But these kinds of numbers aren’t so new, taking inflation into account.

Twenty years ago this week, van Gogh’s “Portrait of the Artist Without His Beard” sold at Christie’s for $71.5 million — almost three times the high estimate.

At that time, it was the third-highest price for any artwork at auction.

The most expensive was van Gogh’s “Portrait of Dr. Gachet,” bought in 1990 by the Japanese industrialist Ryoei Saito for $82.5 million.

With inflation, “Dr. Gachet” held that auction record for many years, the high point of the Japanese-driven Impressionist boom.

That was until last November, when “Salvator Mundi,” a painting cataloged by Christie’s as a long-lost Leonardo da Vinci, sold for $450.3 million.

Your Morning Briefing is published weekdays and updated all morning. Browse past briefings here.

Sign up here to get it by email in the Australian, Asian, European or American morning. To receive an Evening Briefing on U.S. weeknights, sign up here.

Check out our full range of free newsletters here.