We’re covering the morale crisis among agents at the U.S.-Mexico border, a blame game after an attack on Saudi oil facilities and the theft of a very expensive toilet. 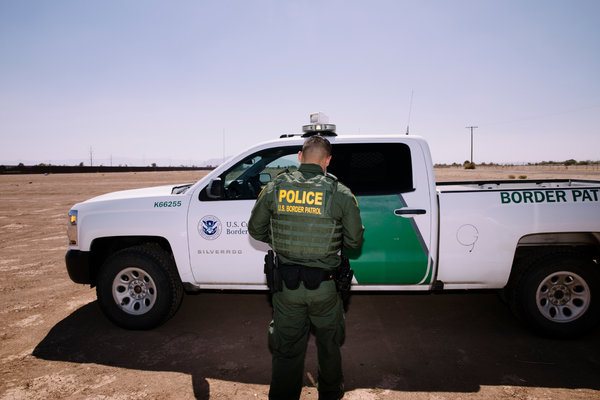 Many of the 20,000 agents of the U.S. Border Patrol, once a quasi-military organization tasked with intercepting drug runners and smugglers, are beginning to feel hated by critics of the Trump administration’s border policy, of which they are a central component.

Some feel angry because they are tired of the blame, threats and insults; others disagree with the border policy and treatment of migrants there; some feel overwhelmed by the agency’s lack of resources and the large number of migrants.

How we know: Interviews with 25 current and former agents in Texas, California and Arizona paint a portrait of an agency in a political and operational quagmire. Overwhelmed by the number of migrants, many agents have grown defensive, insular and bitter.

Fallout from the attacks on Saudi oil plants

The U.S. released satellite images indicating, American officials said, that an attack on Saudi Arabian oil facilities came from the direction of Iraq or Iran.

The drone attack could cripple a portion of Saudi petroleum exports for days or even weeks and send energy prices substantially higher, but experts see it as a short-term disruption. President Trump authorized the release of strategic oil reserves to calm the markets. In response, oil futures that had jumped more than $11 a barrel when the market opened on Monday in Asia eased a bit to just over $7 a barrel higher.

Who is responsible? The Trump administration blamed Iran (although Houthi rebels in Yemen claimed responsibility for the attacks). Iran forcefully rejected that charge.

Big picture: If Iran, or a proxy in Iraq or Yemen, did carry out the attacks, the move fits into a strategy that Iran has followed for months in its escalating confrontation with the Trump administration.

The lead from the Notre-Dame fire

A public health threat has emerged in Paris after an April fire in the city’s beloved 850-year-old cathedral unleashed clouds of toxic dust and exposed schools and parks to alarming levels of lead.

A Times investigation found significant lapses by the French authorities in alerting the public to health risks, even as their understanding of the danger became clearer. It took city officials a month to conduct the first lead tests at a school close to Notre-Dame and, even today, not every school near the cathedral has been tested.

Of note: Some officials said that a city as old as Paris has a lead problem that long predates the Notre-Dame fire.

Traveling to Paris? Most experts recommend staying away from the immediate vicinity of the cathedral, particularly if you have children. We have more tips here.

David Cameron, the British prime minister who called the Brexit referendum, says in a new memoir that Boris Johnson, Britain’s current leader, embraced withdrawing from the European Union only when he sensed it would help his political career.

With his memoir, “For the Record,” Mr. Cameron breaks his years of relative silence since stepping down, offering at once a public apology — saying he “failed” in his approach — and a personal defense.

Some observers blamed him for the chaos and criticized the decision to release the book.

From the memoir: On a tennis court, Mr. Cameron tried to dissuade Mr. Johnson from joining the campaign to leave the E.U., even offering him a top job in his cabinet. But Mr. Johnson did not relent. It set the stage for events that would ultimately end the political career of one and catapult the other into Downing Street.

Related: Britain is more accustomed to surveillance than any other Western country. But some public officials, civil society groups and citizens are beginning to ask whether it should be more closely regulated.

In Lebanon and across the Middle East, marriage remains highly valued but economic pressures have turned weddings into costly burdens.

So powerful brokers have stepped in from militant groups and political parties to bankroll large-scale ceremonies in which dozens — sometimes even hundreds — of couples tie the knot.

Purdue Pharma: The maker of OxyContin, the drug widely seen as igniting the opioid crisis, filed for bankruptcy. It is a centerpiece of an agreement to settle thousands of cases, but it is expected to be vigorously contested by a group of 26 states intent on pursuing the company’s owners, the Sacklers.

Spain: Torrential rains and widespread flooding in the southeastern part of the country have killed six people, the authorities said.

Brett Kavanaugh: Calls for the Supreme Court justice’s impeachment came after an essay in The Times’s Opinion section revealed new information about allegations of sexual assault against Mr. Kavanaugh from his days at Yale.

Italy: Matteo Salvini, the leader of the anti-immigrant League party, pledged to return to power stronger than ever.

Morocco: A journalist and her fiancé were arrested for an abortion the journalist, Hajar Raissouni, says she never had. Some in Morocco saw it as another example of the government persecuting critical journalists and activists by charging them with moral crimes.

Snapshot: Above, the solid 18-karat gold toilet worth $4 million that was stolen from an exhibit at Blenheim Palace, the birthplace and family home of Winston Churchill in Oxfordshire, England. “America,” as the toilet’s creator, Maurizio Cattelan, named it, “was the one percent for the 99 percent, and I hope it still is.”

What we’re reading: This ESPN piece on “the grandmaster diet.” Aisha Khan, a News Desk editor, says she was surprised to learn of the physical toll elite chess players face. Who knew you could “burn 6,000 calories a day in a tournament”?

Cook: Yes, toast can be dinner, so top it with broccoli and melted provolone.

Read: Before Netflix was Netflix, Marc Randolph was the company’s chief executive, working alongside Reed Hastings and trying to figure out what they did best and how to focus on that. He tells the story in his memoir, “That Will Never Work.”

Listen: In fiction podcasts, screen and stage actors get to play parts Hollywood is too risk-averse to offer, with the added perk of no need to sit for makeup.

Go: The mentalist Derren Brown is coming to Broadway. But can he be fooled by some ordinary optical effects in a museum?

Smarter Living: We can help you secure your digital life, with seven easy steps over seven days. (We’ll remind you by email.) Step 1: Set up a password manager. Testers at Wirecutter, a Times company that reviews products, recommend LastPass, which is free but a bit complicated, and 1Password, which is more intuitive but costs $36 a year.

Are you keeping up with health news? Take our Well team’s weekly quiz.

The oldest air race in the world

Twenty teams lifted off in gas balloons from Montbéliard in eastern France on Friday night to see which could go the farthest without stopping.

Some of these adventurers are still flying. In fact, the competition in the Gordon Bennett Cup could go on for another day or so.

The race is named for James Gordon Bennett Jr., the playboy and heir to The New York Herald, who started the race in 1906 while he ran the newspaper’s Paris edition.

The event can be perilous. In 2010, the U.S. team disappeared during a storm over the Adriatic Sea. In 1995, an American balloon crossed into Belarusian airspace and was shot down by the military.

This year’s race is going well. A Swiss team — Kurt Frieden and Pascal Witpraechtiger — has the lead as of this writing, having gone more than 740 kilometers (almost 500 miles).

Thank you
Alisha Haridasani Gupta helped compile this briefing. Mark Josephson and Eleanor Stanford wrote the break from the news. Victoria Shannon wrote today’s Back Story. You can reach the team at [email protected]

P.S.
• We’re listening to Episode 4 of “The 1619 Project” podcast, on how race shaped the U.S. health system, and “The Daily,” about the Democratic presidential candidates’ debate in Houston.
• Here’s today’s Mini Crossword puzzle, and a clue: President after J.F.K. (three letters). You can find all our puzzles here.
• Marc Lacey, the National editor at The New York Times, will be a moderator for the next Democratic debate (Oct. 15), along with the CNN anchors Anderson Cooper and Erin Burnett.