We’re covering the aftermath of attacks on oil facilities in Saudi Arabia, a bankruptcy filing by the manufacturer of OxyContin, and the death of the lead singer of the Cars, Ric Ocasek. 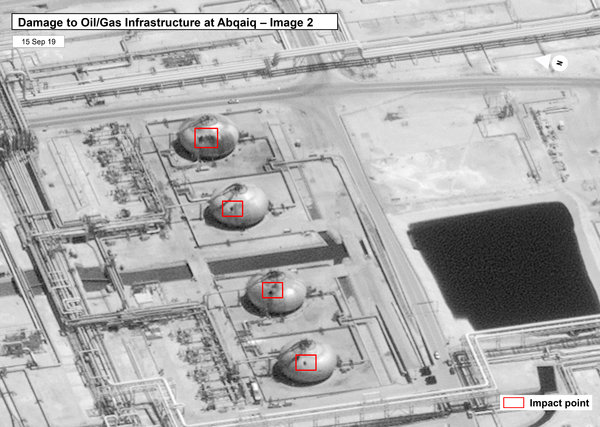 Focus on Iran after strikes on Saudi oil

President Trump said on Sunday that the U.S. was “locked and loaded” but would consult with Saudi Arabia after attacks against major Saudi oil facilities over the weekend.

Washington released satellite photographs showing what officials said were strikes from the northern Persian Gulf — Iran or Iraq — rather than from Yemen, where the Houthi militia that claimed responsibility for the attacks operates.

Iran rejected as “max deceit” an accusation by Secretary of State Mike Pompeo that it was responsible.

Background: Squeezed by American sanctions, Iran has sought to inflict similar pain on regional rivals, but it has stopped short of a direct attack that might prompt a military response.

Related: The damage could take roughly 5 percent of global oil supplies off the market, but experts said any disruption was unlikely to last.

Another angle: Iran has dismissed the possibility of a meeting between its president, Hassan Rouhani, and Mr. Trump at the United Nations next week, state news media reported today.

The maker of OxyContin, the drug widely seen as causing the opioid crisis, filed for Chapter 11 bankruptcy on Sunday in an effort to shield itself and its owners, the Sackler family, from more than 2,600 lawsuits.

Restructuring the company was at the heart of a tentative settlement reached last week, but the terms of Sunday’s filing are expected to be contested by 26 states that have not agreed to the deal.

The details: Under the proposal, the Sacklers would give up ownership of Purdue and pay $3 billion to the plaintiffs. They would also have to sell their Britain-based drug company, Mundipharma.

What’s next: A judge will decide whether the states’ objections are sufficient to scuttle the settlement.

Almost 50,000 members of the United Automobile Workers union will head to the picket lines this morning across the Midwest and South in the union’s first such strike since 2007.

The union is pushing General Motors to improve wages and reopen idled plants, while the automaker wants employees to pay a greater percentage of their health care costs.

Background: The company has been earning substantial profits in North America — and made $8.1 billion globally last year — but it has idled three U.S. plants as demand for vehicles weakens.

Related: The number of people who participated in work stoppages involving over 1,000 workers rose last year to its highest level since the 1980s.

Several Democratic presidential candidates on Sunday called for the impeachment of the Supreme Court justice after The Times published new information about sexual misconduct allegations against him. President Trump and other Republicans said the reporting was irresponsible.

A book by two Times reporters who covered Justice Kavanaugh’s confirmation hearings revisits an accusation by a former Yale classmate, Deborah Ramirez, who said she was at a party where he thrust his penis in her face.

Senate investigators had originally concluded that Ms. Ramirez’s account was unsupported, but the book says at least seven people “heard about the Yale incident long before Mr. Kavanaugh was a federal judge.”

Go deeper: An adaptation of the book, which is to be released on Tuesday, was published this weekend in our Opinion section.

Background: The revelations were uncovered during the reporting for the book, which is why they haven’t appeared in The Times before.

A crisis in the Border Patrol

One agent said he had been called a “sellout” and a “kid killer.” Another quit last year out of frustration. “Caging people for a nonviolent activity,” he said, “started to eat away at me.”

Under President Trump, the nearly 20,000 Border Patrol agents have gone from having one of the most obscure jobs in law enforcement to one of the most hated. The Times interviewed more than two dozen current and former agents, revealing a picture of an agency in crisis.

Elections in Israel: Tuesday’s voting could hinge on the breakup of the odd-couple relationship between Prime Minister Benjamin Netanyahu and Avigdor Liberman, his former deputy.

New violence in Hong Kong: Protesters threw gasoline bombs at government offices, as a day that began with a peaceful pro-democracy march ended in clouds of tear gas and brawls between civilians.

Snapshot: Above, a block party in the Hamilton Heights neighborhood of New York. The Times sent 20 photographers to 65 parties to capture New Yorkers eating, dancing and playing in the streets.

In memoriam: Ric Ocasek, co-founder and lead singer of the Cars, was a member of the Rock & Roll Hall of Fame, with hits including “Shake It Up” and “You Might Think.” He was found dead on Sunday at his home in Manhattan.

N.F.L. results: The Los Angeles Rams (and the referees) beat the New Orleans Saints. Here’s our roundup of Sunday’s games.

This is not a prank: An 18-karat gold toilet worth $4 million was stolen from Blenheim Palace, the family home of Winston Churchill in Britain.

Metropolitan Diary: In this week’s column, sympathetic words in an elevator, a sign from above and more reader tales of New York City.

What we’re reading: This ESPN piece on “the grandmaster diet.” Aisha Khan, a News Desk editor, says she was surprised to learn of the physical toll elite chess players face. Who knew you could “burn 6,000 calories a day in a tournament”?

Cook: For dinner, top toast with broccoli and melted provolone.

Watch: Coming to TV this fall: Everything. Here’s our exhaustive roundup of a crowded season.

Listen: In fiction podcasts, actors get to play parts that Hollywood is too risk-averse to offer, with the added perk of no need for makeup.

Go: “Secret,” a one-man show by the mentalist Derren Brown, offers “warming reassurance to the head cases of New York City,” our critic writes. It’s at the Cort Theater in Manhattan.

Smarter Living: We can help you secure your digital life, with seven easy steps over seven days. Step 1: Set up a password manager. Testers at Wirecutter, a Times company that reviews products, recommend LastPass, which is free but complicated, and 1Password, which is more intuitive but costs $36 a year.

Are you keeping up with health news? Take our weekly quiz.

The oldest air race in the world

Twenty teams lifted off in gas balloons from Montbéliard, France, on Friday to see which could go the farthest without stopping.

Some of the adventurers are still flying. In fact, the competition in the Gordon Bennett Cup could go on for another day or so.

The race is named for James Gordon Bennett Jr., the playboy and heir to The New York Herald, who started the race in 1906 while he ran the newspaper’s Paris edition.

The event can be perilous. In 2010, the U.S. team disappeared during a storm over the Adriatic Sea. In 1995, an American balloon crossed into Belarusian airspace and was shot down by the military.

This year’s race is going well. A Swiss team had the lead at time of writing, having gone more than 610 miles.

Thank you
Melina Delkic helped compile today’s briefing. Mark Josephson and Eleanor Stanford provided the break from the news. Victoria Shannon wrote today’s Back Story. You can reach the team at [email protected]

P.S.
• We’re listening to “The Daily.” Today’s episode is about the extraction of a C.I.A. spy inside the Kremlin.
• Here’s today’s Mini Crossword, and a clue: President after J.F.K. (three letters). You can find all our puzzles here.
• Marc Lacey, the editor of The Times’s National desk, will be a moderator for the next Democratic debate, on Oct. 15, along with the CNN anchors Erin Burnett and Anderson Cooper.

Chris Stanford writes the U.S. edition of the Morning Briefing. He also compiles a weekly news quiz. He joined The Times as a home page producer in 2013, before which he worked at The Washington Post and other news outlets. He is now based in London. @stanfordc