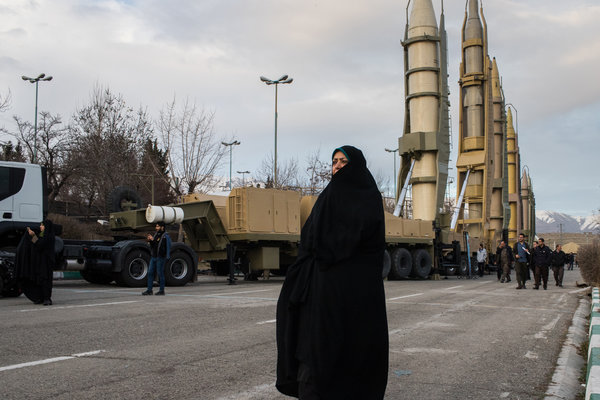 The Trump administration has accelerated efforts to thwart Iran’s missiles and rockets as part of an expanding campaign to isolate the country, according to current and former officials.

The efforts, initiated under former President George W. Bush and then eased under President Barack Obama, covertly slip faulty parts and materials into Iran’s aerospace supply chains. The Trump administration maintains that the country’s space program is merely a cover for its attempts to develop powerful ballistic missiles that could deliver nuclear warheads.

Secretary of State Mike Pompeo, who is in Warsaw this week for an international meeting focused on Iran, is expected to push European and Arab countries to expand economic sanctions against Tehran.

Details: It is difficult to determine direct causes, but in the past month alone, Iran’s two attempts to launch satellites failed within minutes. And in the past 11 years, 67 percent of Iran’s orbital launches have failed, compared with the global failure rate of 5 percent.

How we know: The two recent launch failures prompted The Times to seek out more than half a dozen current and former government officials who have worked on the sabotage program over the past dozen years. They spoke on condition of anonymity.

Accused of spying: A former U.S. Air Force counterintelligence agent was charged with espionage after she defected to Iran to help the country’s elite Revolutionary Guards target her former American colleagues.

An attack in Iran: A suicide bomber killed 41 Islamic Revolutionary Guards in the deadliest attacks in Iran in years, for which the paramilitary force quickly blamed the U.S.

The embattled former Nissan chairman, who has been in a Tokyo jail since November on charges of financial misconduct, has tapped a lawyer known as the Razor to defend him.

“This represents the beginning of the process of not only establishing my innocence but also shedding light on the circumstances that led to my unjust detention,” Mr. Ghosn said in a statement.

The move adds flair to a case that is already filled with drama and intrigue.

Who is the Razor? Junichiro Hironaka, 73, has garnered a reputation for scoring acquittals in high-profile cases. He represented a Kazuyoshi Miura, who was charged with plotting to have his wife killed during a trip to Los Angeles in 1981, a case that riveted Japan for years. Mr. Miura was convicted in 1994, but the verdict was later overturned.

Mr. Hironaka also represented a major political power broker who was acquitted of charges related to a political financing scandal in 2012.

The co-founder of Rappler, an online news start-up critical of President Rodrigo Duterte, was arrested in a digital libel case against her media outlet.

Maria Ressa was denied bail, according to a Rappler editor. In an emailed statement, she said: “These legal acrobatics show how far the government will go to silence journalists, including the pettiness of forcing me to spend the night in jail.” The country’s National Union of Journalists, called her arrest a “shameless act of persecution by a bully government.”

This case is the latest in a string of legal attacks against her and other journalists by the government.

Background: Rappler has helped draw global attention to the brutal war on drugs Mr. Duterte has waged since coming into power in 2016.

This arrest is related to an article that Rappler published in 2012 looking into questionable transactions between the chief justice at the time and a wealthy businessman.

Analysis: Ms. Ressa’s arrest represents the most dramatic sign yet of Mr. Duterte’s crackdown on the news media. He has openly called reporters “sons of bitches” and has even warned he would not allow the renewal of the license of the country’s biggest broadcast news network.

Legal cases in South Korea over Japan’s actions during World War II are creating a bitter dispute that has drawn warnings of devolving into “a full-blown diplomatic war.”

In October, the country’s Supreme Court ordered a Japanese company, Nippon Steel, to compensate Korean men who were forced to work for the steel maker during the war. In January, a lower court ordered the seizure of some of Nippon’s shares in a South Korean steel company, PNR, to pay for the reparation.

Japan’s response: Tokyo has reacted with outrage, saying it has already settled the historic disputes. Prime Minister Shinzo Abe has warned of economic retaliation if the rulings are enforced.

Analysis: The court cases are resurfacing one central question that has long strained South Korea-Japan relations — Has Japan accepted full responsibility for occupying Korea and mobilizing Koreans for its war effort?

Climate change: A Swiss company thinks it can remove carbon dioxide from the air at prices cheap enough to matter. Such “negative emissions” processes offer a glimmer of hope for meeting future global targets to avert the worst consequences of climate change.

Atlassian: The Australian company’s founders, Scott Farquhar and Mike Cannon-Brookes, are the country’s first start-up-to-I.P.O. tech billionaires. They have suddenly emerged as prominent political voices as the government tilts toward the right on global issues.

The real black panther: Scientists spotted the rare animal in Africa, the first such sighting in almost 100 years, near the fictional setting of the Oscar-nominated film of the same name.

China: A film by the prominent director Zhang Yimou that’s set during the Cultural Revolution was abruptly pulled from the Berlin Film Festival for “technical reasons” — a term often used as a euphemism for government censorship — adding to worries about the Communist Party’s broadening crackdown on discussions of sensitive topics.

U.S. border deal: President Trump inched toward embracing a bipartisan border deal that fell far short of his demands for funding for a wall. The legislation, which would avert another government shutdown, is expected to be finalized today, with a House vote on Thursday night, followed by Senate passage.

Indonesia: An Instagram account that featured a comic strip with gay Muslim characters disappeared days after officials in the country derided it as pornographic and threatened to block the entire social media platform. The episode underscored the rise of the country’s hard-line Islamic movement.

Perspective: Salman Alodah, a prominent scholar in Saudi Arabia who championed civil liberties, has been in prison for over a year and faces the death penalty for a tweet urging reconciliation with Qatar. “He was chained and handcuffed for months inside his cell,” his daughter wrote in an Op-Ed for The Times that questions the reformist image of Crown Prince Mohammed bin Salman.

American spirits: Since the Trump administration imposed tariffs on imported steel and aluminum, the spirits industry said it faced retaliatory tariffs on $763 million worth of products, the latest sector to bear the brunt of the president’s economic policies.

Opportunity: NASA’s Mars rover that has been exploring the red planet for 15 years is dead, after a planet-wide dust storm knocked out its solar panels. It was the longest-lasting robot sent from Earth.

Recipe of the day: Make this Valentine’s Day special with a chocolate lava cake for two.

If you’ve received a bouquet, here’s how to keep the flowers fresh.

Brokenhearted? Here are some books that will help you escape.

For Valentine’s Day we have a special display of affection.

Julia Child and her husband, Paul, sent Valentine’s Day cards to their friends every year. Your Back Story writer’s grandparents were the recipients of some of those handmade notes.

But one encounter left much to be desired.

My grandfather was on a Fulbright scholarship in Oslo in 1960 when he met Mr. Child, who was stationed there. One night, he returned from a visit to the Childs’ raving about the most extraordinary dish — quiche.

My grandmother waited, impatiently, to also be invited for a bite. But when the invitation finally came, Mrs. Child served a tray of reindeer salami, not the quiche. My grandmother still feels the letdown.

Mrs. Child went on to publish “Mastering the Art of French Cooking” and corresponded with my grandparents occasionally, most notably on Valentine’s Day. (Here are two of their Valentines.)

As for the salami? “I do not recommend it,” my grandmother said.

Remy Tumin, on the briefings team, wrote today’s Back Story.