A quirky food-lover has sparked a major debate with his tongue-in-cheek rant about boneless chicken “wings,” which he denounced as a “lie” at a council meeting in Lincoln, Neb.

Ander Christensen, whose father is a city councillor, stepped up to deliver a passionate speech about chicken terminology during a public comment session on Monday, in a moment that has been watched millions of times online.

Video shows Christensen approaching the microphone in a shirt and tie with his long hair combed straight and a stern expression on his face, before delivering what will likely be the most-watched speech of his life.

“We have been casually ignoring a problem that has gotten so out of control that our children are throwing around names and words without even understanding their true meaning,” he tells the council.

“I go into nice family restaurants and I see people throwing this name around and pretending everything is just fine.

Christensen then launches into a tongue-in-cheek proposal to ban the term “from our menus and from our hearts” in Lincoln, pausing once during the rant to scold someone for chuckling at him.

“Excuse me,” he tells the laughing person, before getting back to his business.

The prankster then explains why he has a bone to pick with the term. First, he points out that boneless chicken wings are made from chicken breasts, not wings.

“We would be disgusted if a butcher was mislabelling their cuts of meat,” he says. “But then we go around pretending as though the breast of the chicken is its wing?”

Second, he points out that a boneless “wing” is just a chicken tender, which is always boneless anyway. “I don’t ask for boneless auto repair,” he says. “It’s just what’s expected.”

Finally, he suggests that the term “boneless chicken wings” is misleading for children. “That’s where meat comes from — it grows on bones,” he says.

He then offers a few alternative names for boneless chicken wings.

Christensen wraps up his speech with one final plea.

“We’ve been living a lie for far too long,” he says. “And we know it because we feel it in our bones.” 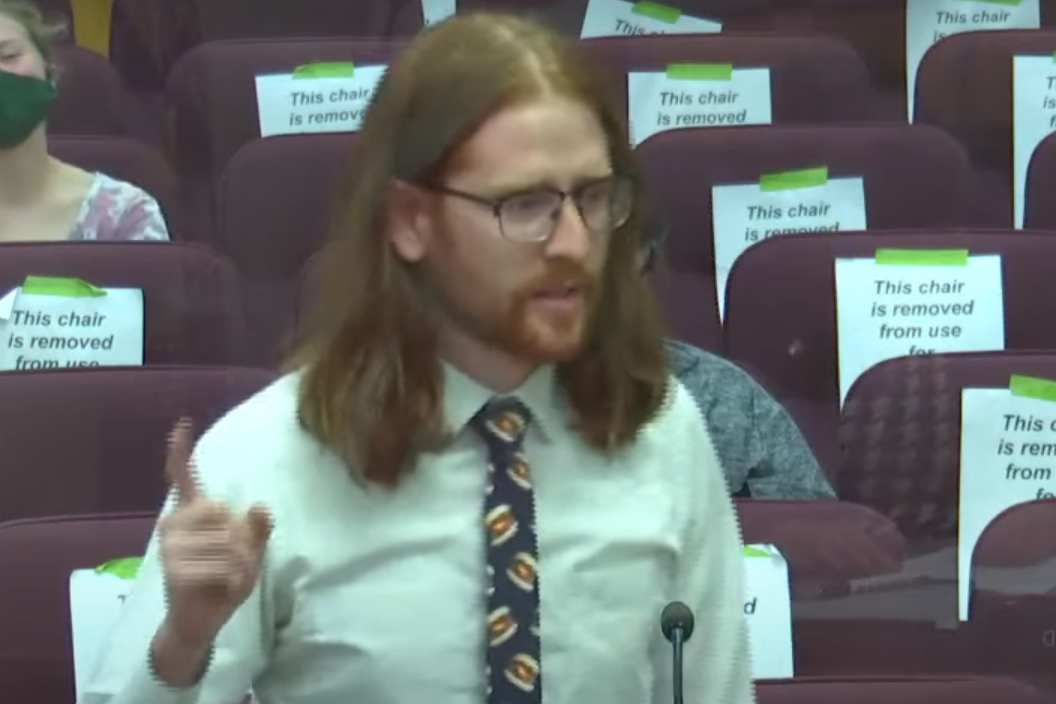 The tender-lover’s dad, Coun. Roy Christensen, then speaks up from his seat on the council.

“For the record, that’s my son,” he says, triggering a wave of awkward laughter from his colleagues.

“It was time for me to get involved in local politics,” the younger Christensen tweeted on Tuesday, as video of his rant started to go viral.

Christensen’s plea appears to have captured people’s imaginations on social media, where some compared it to the age-old “is a hot dog a sandwich?” question.

One version of his speech has been watched more than 5 million times on Twitter, and another has racked up about 1 million views.

Buffalo Wild Wings, a restaurant chain in the U.S. and Canada, responded to Christensen’s idea with several joking taunts.

“We are appalled,” it wrote in one tweet. “Boneless wings are not nuggets,” it later added.

Wingstop, another wing chain, also jumped into the debate.

“Excuse me, do you want to fight?” it tweeted.

Christensen’s rant about the seemingly pointless topic sparked a flurry of passionate responses.

Singer-songwriter Lewis Capaldi threw his support behind “Saucy nugs,” in a tweet liked by more than 11,000 people.

“Don’t want to get too political here … but he has a point,” user Ethan Rowley wrote, in a popular tweet featuring the video. Rowley opted to hashtag “Saucy nugs” in the tweet.

“Finally a platform to unite us all,” NFL reporter Charles Robinson tweeted. “Dude wore a tie to make this statement so the city council would know he means business, too.”

Christensen confessed to the New York Times on Wednesday that his speech was a joke, but he still believes in the notion behind it.

“I would love nothing more than to have boneless chicken wings removed from menus,” he said. “Don’t call it something it’s not.”

The elder Christensen told the Times that Lincoln is taking his son’s plea into consideration, although he admits it might be too big to fix at the city level.

“Frankly, this is an issue that’s too large for a stage like the Lincoln, Neb., city council,” he told the Times. “This is probably something that would have to be addressed by the Department of Agriculture, since they take care of all the labelling.”

Ander Christensen told Gizmodo that he’ll be pushing for the term “Buffalo-style chicken tenders” in local legislation. But that’s not his favourite term.

“For the sake of my own usage, I like saucy nugs,” he said.