The Women’s College World Series, which began yesterday, is one of the most popular events in college sports.

It is an eight-team softball tournament held every year in Oklahoma City, and the games frequently sell out. The television audience on ESPN is substantial, too. In the most recent previous tournament, 1.8 million people watched the final game, substantially more than have watched recent championship games of college soccer, hockey or lacrosse — men’s or women’s.

The popularity of softball makes it a telling study in the different ways that the N.C.A.A. treats female and male athletes. In terms of fan interest, softball ranks near the top of college sports. It is well behind football and basketball, but ahead of almost every other sport.

Yet the N.C.A.A. treats softball as a second-class sport, many athletes and coaches say.

The stadium that hosts the championship tournament has no showers; players and coaches must instead shower at their hotels. Off days between games are rare, and some teams have to play twice on the same day, increasing injury risk. The N.C.A.A. prefers the condensed schedule to hold down hotel and meal costs, coaches have told Jenni Carlson of The Oklahoman.

The men’s version of the College World Series — an eight-team baseball tournament held each year in Omaha — treats the players better. They have off days, as well as a golf outing, a free massage day and a celebratory dinner for coaches, players and dozens of guests, Molly Hensley-Clancy of The Washington Post reported.

The Oklahoma City softball stadium is also too small to hold all the fans who would like to attend, and many games sell out quickly. It has a capacity of about 13,000 (recently expanded from 9,000), compared with 24,000 for the baseball stadium in Omaha. “I think we could easily get 20,000, just like the men,” one longtime coach told The Post. “But we won’t get that chance.”

Gender equality in sports has been the subject of growing debate in recent years, partly because of protests from the U.S. women’s soccer team over its treatment. The new attention on college sports was prompted by a video that Sedona Prince, a University of Oregon basketball star, posted on social media in March. In it, she contrasted the sprawling weight room for the men’s tournament with a single small rack of weights for the women’s tournament.

“If you’re aren’t upset about this problem, then you are a part of it,” she said. (Gillian Brassil has profiled Prince in The Times, focusing on her recovery from a life-threatening leg injury.)

The video received tens of millions of views and led athletes, coaches and parents in other sports to scrutinize other college tournaments, Alan Blinder, a Times sports reporter, told me. “It’s an issue that has wide resonance on social media, where student-athletes can make their views and experiences known without as much interference from a university gatekeeper,” Alan said. Women’s volleyball players, for example, documented that their practice court consisted of a mat atop a cement floor.

Equity in sports can be a complicated topic, because men’s sports often draw larger crowds and television audiences. Officials who defend the differential treatment of female and male athletes — as executives at U.S. Soccer have — cite the revenue differences.

But the softball situation shows how incomplete those explanations are. The average television audience for the most recent softball World Series (1.05 million) was similar to that of the most recent college baseball World Series (1.13 million). And yet one sport’s players get showers, off days, massages and a festive dinner, while the others get doubleheaders and sweaty bus rides back to a hotel.

I asked N.C.A.A. officials for a response, and they did not address any of the specific differences between the baseball and softball tournaments. In an emailed statement, Joni Comstock, the senior vice president of championships, said the N.C.A.A. was looking forward to “another exciting championship series.”

The N.C.A.A. forbids women’s basketball from using the term “March Madness,” The Wall Street Journal has explained. But that may soon change.

In the Division One N.C.A.A. lacrosse tournaments, all men’s games are televised and staggered so fans can watch every one. Most women’s games are available only online, and many overlap. “What a joke,” Taylor Cummings, a former University of Maryland player, tweeted.

On the latest “Sway” podcast, Cathy Engelbert, the commissioner of the W.N.B.A., says the success of women’s tennis should be a model for team sports. “We still have an enormous amount of work to do,” Engelbert told Kara Swisher. 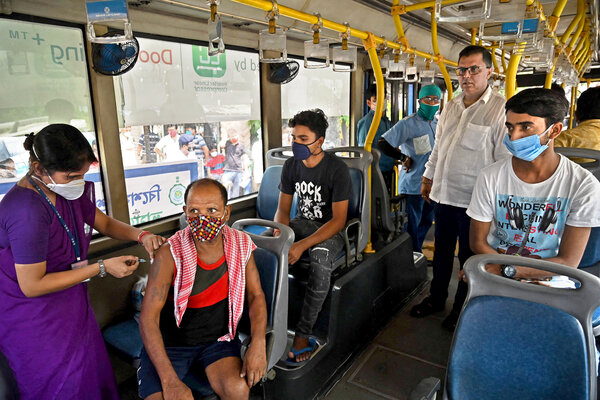 The White House will distribute 25 million shots this month to mostly lower-income countries.

California and 11 other states have given 70 percent of residents at least one vaccine dose. Others, especially red states, are falling behind.

Vaccine programs in Africa are struggling because of funding and vaccine shortages.

President Biden offered to cut the price tag on his infrastructure plan nearly in half, hoping to reach a bipartisan deal.

Facebook will no longer give politicians special treatment if their speech breaks its rules.

Biden expanded a blacklist barring Americans from investing in Chinese firms that aid surveillance and repression.

Robert Mueller will teach a course on the Trump-Russia investigation at the University of Virginia’s law school.

Intelligence officials found no evidence that the strange flying objects spotted by Navy pilots were alien spacecraft, but they couldn’t rule it out either. (Why all the talk about U.F.O.s?)

Ultrafast commercial flights ended in 2003. United Airlines wants to bring them back.

A secretive U.N. maritime agency is undermining the fight against climate change.

A P.S.A.: Don’t eat cicadas if you’re allergic to seafood.

Movies and television have too often left out stories about the history of Black people, Tom Hanks writes. “That includes projects of mine.”

Fine art: The Michelangelos need cleaning. Send in the bugs.

Second chance: Covid forced a surgeon to face death — as a patient.

Modern Love: Wrestling with the tendency to classify books and people.

A Times classic: Take a peek into Prince’s creative process.

Lives Lived: F. Lee Bailey was the stuff of courtroom legend: an audacious defender of O.J. Simpson, Patty Hearst and others, who produced legal entertainment long before Court TV. He died at 87.

You probably haven’t heard of the 19th-century painter Edmund Walpole Brooke. But he is a part of art history — not for his own work, but for his proximity to the Dutch painter Vincent van Gogh. Brooke was friendly with van Gogh in the weeks before his suicide in 1890. And so for historians, he may offer insight into van Gogh’s final days, for which there is little documentation aside from letters to his family.

Kodera has spent several years researching Brooke, and uncovered evidence that his work was exhibited in Britain, France and Japan. But, like other scholars, he had failed to find a painting by Brooke — until perhaps now.

In April, Katherine Matthews spotted a watercolor of a Japanese woman and her child with the signature E.W. Brooke in an antique shop in Maine. She paid $45 for the painting, and after looking up the artist’s name online, reached out to Kodera. The Brooke painting is not fully authenticated, and there is no other work of his to compare it to, but Kodera is hopeful. “This CAN be a breakthrough,” the professor said in an email, “to shed new light on the painter, and on van Gogh’s last months.” — Sanam Yar, a Morning writer

With a lead role in the upcoming film version of “In the Heights,” Anthony Ramos finds stardom on his own terms.

Tom Lin makes his debut with “The Thousand Crimes of Ming Tsu,” a surreal Western that has drawn comparisons to Cormac McCarthy and “True Grit.”

This week’s News Quiz is here. See how you do compared with other Times readers.

The pangram from yesterday’s Spelling Bee was telekinetic. Here is today’s puzzle — or you can play online.

Thanks for spending part of your morning with The Times. See you Monday. — David

P.S. A hidden haiku from a Times interview with Stephen King: “They say the minute / you show the monster, you take / away its power.”

There’s no new episode of “The Daily.” Instead, listen to Episode 2 of “Day X,” about far-right extremism in Germany. On “The Ezra Klein Show,” what A.I. teaches us about being human.