I was born in Atlanta in 1960, and when the Braves moved to town from Milwaukee after the 1965 season, Hank Aaron became my all-seasons hero.

That didn’t seem unusual in my family, because my New Jersey-bred mother and Pennsylvania-raised father considered themselves civil rights foot soldiers. But it was anathema to my white classmates. I’ll never forget a day in spring 1966 when we picked the Braves players we wanted to be for a game of sandlot ball, and I picked Aaron. The other boys chose white players like Joe Torre, Denis Menke and Phil Niekro. When I came up to bat, the pitcher called out the N-word and tried to hit me with the ball, and everyone on the field laughed.

That evening my mother, a high school English teacher, spoke to me about the disease of racism in a serious way, encouraging my admiration for Hammerin’ Hank and later hanging a brand-new poster of him on my bedroom wall. 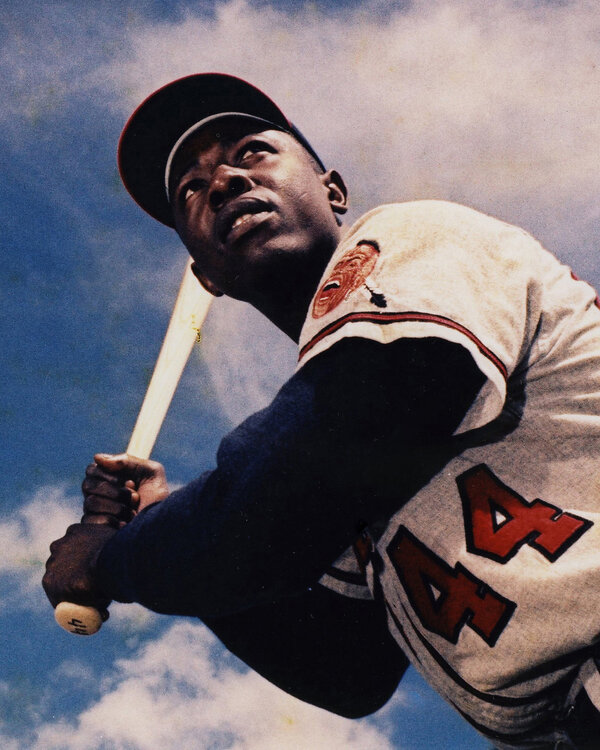 Through the rest of the 1960s, we went to Braves home games, and I’d wave my homemade placards with slogans like “The Hammer Nails It” or “Aaron is RBI King!” I was in the stands on July 14, 1968, when Aaron became the first Braves player to hit his 500th career home run. It was only three months after the Rev. Dr. Martin Luther King Jr. had been murdered in Memphis, and the sight of Aaron out on the field — still standing tall, still making sensational plays in right field and outbatting the best white athletes — gave me, even as an 8 year old, a sense that the world was still turning, and greatness still shone.

That feeling stayed with me when I got to know Aaron later in life — well enough to appreciate his humble and low-key demeanor, and well enough that I knew not to call him Hank.

And it helps explain why I was so thrilled, in early November 2020, to visit with him and his wife, Billye, at their sprawling lakeside home in Atlanta for what would be my final interview with him. The clock was ticking toward Election Day, and the Aarons had been working and praying overtime for Joe Biden to defeat Donald Trump. Over coffee we spoke about the greatness of Kamala Harris, the death of John Lewis, the excellence of the Black Lives Matter movement, the poor health of Ted Turner (“A rich guy exactly the opposite of Trump. He’s share and share alike”) and the couple’s friendships with four previous presidential couples, the Carters, Clintons, Bushes and Obamas.

“I don’t know of anybody,” he said, “I mean anybody, that is smarter than Jimmy Carter.”

And of course, we talked baseball. Across a 25-year professional career, Aaron exhibited unshakable discipline, bedrock humility, stark professionalism and the ability to not hold grudges for long.

By the time he hit his historic 715th home run in 1974, breaking Babe Ruth’s record, my family had moved from Atlanta to Ohio, so I had to watch on TV instead of from the stands at Fulton County stadium. And I remember being nervous. As Aaron had chased Ruth’s record, he’d received thousands of racist death threats, and as he trotted around the bases that day, I feared someone would shoot him dead. It was a fear he endured as well.

“During the chase, you know, there was the Atlanta police that guarded me,” he told me. “It wasn’t the F.B.I. Don’t forget, the F.B.I., that was [J. Edgar] Hoover” — who left a troubling racist legacy. Aaron added, “My oldest daughter was at Fisk University at that time, and some F.B.I. agents did protect her because of death threats.”

Around the Aarons’ living room, half a dozen pictures of Jackie Robinson stood out among piles of books on American history and the Black experience. Growing up poor in Mobile, Ala., Aaron knew racism as a fact of life. “One evening, I had a baseball and was rolling it over our house and catching it before it got back over the other side, which I did often. Then my mother came out and shouted, ‘Go in and go under the bed!’ And I got under the bed, and 20 minutes later the Ku Klux Klan came by and threw a match and things caught fire,” he told me. “Things got really bad.”

Robinson had been Aaron’s own boyhood idol and watching him integrate baseball in 1947 had changed the younger man’s life. “I once heard Jackie speak at a grocery store,” Aaron told me, with a wide grin. “It was in Mobile, Alabama, and I knew I was in the presence of greatness. I wasn’t associated with him, he didn’t know me from Adam, but just to be in his presence transformed me. And later in life I realized that he was a lot like Dr. King, you know. They were just human beings, and that’s what made them so magnificent.”

I asked Aaron if as a young man he’d dreamed of someday playing in the major leagues like Robinson. “I recognized that I had a gift,” he acknowledged. “Yes, I did. I realized that I could play baseball a little bit better than the other people around me. I could play about as well as anybody that ever played the game.”

His love for the game was absolute, and at age 17 he was signed to play for the Negro League’s Indianapolis Clowns. “When I was coming up in the Negro League, I was by myself,” he recalled. “I had one pair of spikes, plus one pair of shoes. But usually, you know, God has a way of taking care of people who take care of themselves. There was not anything I wanted. I was not a guy that’d go around looking for girls or anything. That was not my makeup. I was a pure baseball player. I had $2 in a suitcase that my mother had given me and told me that was all I was ever going to have.”

Although Aaron remained proud of having beaten Babe Ruth’s home run record, he claimed his fondest sports moment was when he’d traveled to New York in 1957 with the Milwaukee Braves and defeated the Yankees on their home field. “A lot of baseball fans don’t understand that,” he said. “They thought the Braves came to Yankee Stadium that year to play exhibition games or something, and that was not the case. We played to win, you know? We had great ballplayers like [Eddie] Mathews and Warren Spahn. We had Lew Burdette and Bob Buhl. We had players that were in the majors to win.”

Aaron said that he and Eddie Mathews “had differences of opinions about different things.” Being careful with his words, he explained: “He was more — how can I say it? I hate to say it because he’s dead and gone … He just took things for granted, and he was very vicious — had a mean streak. But he never bothered me.” In fact, “he was one guy that took up for me more than anybody else on the Milwaukee Braves.”

So many of the other men Aaron had played with were also dead and gone, the most recent being his friend Hall of Famer Joe Morgan of the Cincinnati Reds. Toward the end of our four-hour interview I asked him if so much loss was hard to process.

“It is,” he said. “It’s sad. But I guess in some ways, you know, you come here, and you have to leave. God doesn’t expect you to stay all the time. It’s tough. I’m at that age now where anything might happen to me. That’s the way life is.”

Douglas Brinkley is is a humanities and history professor at Rice University and author of “Rosa Parks: A Life.”