The path to Teresa L. Todd’s arrest began when three desperate Central American migrants waved frantically at her car on a Texas highway one night in February.

At least one other car had hurtled by, afraid to stop. But for Todd, compassion overrode any fear. “I’m a mom,” explained Todd, who has two boys, ages 15 and 17. “And I see a young man who looked the same age and size as my younger son. And if my son was by the side of the road, I would want someone to help.”

Jesus said: “A man was going down from Jerusalem to Jericho, when he was attacked by robbers. They stripped him of his clothes, beat him and went away, leaving him half dead.” (Luke 10:30)

Todd, a single mom who works as a lawyer for a city and county in West Texas, found three siblings: two brothers ages 20 and 22 and their sister, Esmeralda, 18. To escape violence, they fled their native El Salvador years ago and recently Guatemala, where friends were murdered and a gang leader wanted to make Esmeralda his “girlfriend.” 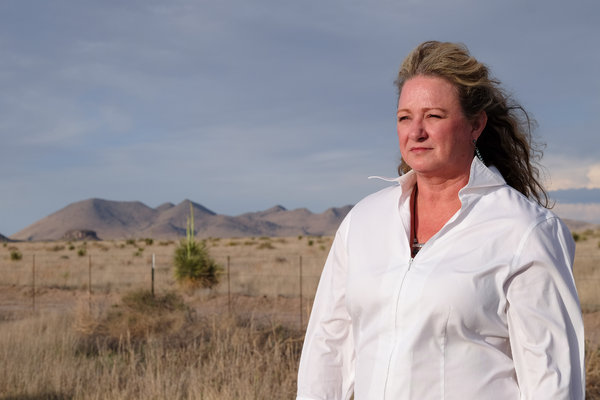 Esmeralda was suffering from starvation, dehydration and a potentially fatal syndrome called rhabdomyolysis that can lead to kidney failure. Seeing that Esmeralda was very sick, Todd invited the migrants into her car to warm up, and she began frantically texting friends (including one who is a lawyer for the Border Patrol) for advice about getting Esmeralda medical attention.

A sheriff’s deputy pulled up behind Todd’s car, lights flashing, and a Border Patrol officer arrived shortly afterward. The officers detained Todd for three hours, confiscating her possessions and keeping her in a holding cell.

By stopping to help a stranger, Todd may have saved a life — but this also got her arrested.

“It was totally surreal,” Todd recalled. “Especially for doing what my parents taught me was right, and what I learned in church was right, which was helping people. So finding myself in a holding cell for that, it was hard to wrap my head around.”

“But a Samaritan, as he traveled, came where the man was; and when he saw him, he took pity on him. He went to him and bandaged his wounds, pouring on oil and wine."

Esmeralda was hospitalized for four days, and she and her siblings are now in ICE custody. Todd has not been charged with a crime so far, but the authorities seem to have been considering a federal indictment. I reached out to federal and local officials for comment; they did not respond.

“Then he [the Samaritan] put the man on his own donkey, brought him to an inn and took care of him. The next day he took out two denarii and gave them to the innkeeper. ‘Look after him,’ he said, ‘and when I return, I will reimburse you for any extra expense you may have.’”

The arrest of a mom who may have saved a life reflects the increasingly harsh treatment under President Trump of anyone who tries to help migrants. In Arizona, a man named Scott Warren of the aid group No More Deaths/No Más Muertes, which leaves water, blankets and food for migrants, is to go on trial this month on felony charges that in theory carry terms of up to 20 years in prison. That’s quite a penalty for trying to save the lives of fellow human beings, and others have been prosecuted for misdemeanor offenses.

“This is all about trying to chill the willingness of people to help others,” Todd said. “A friend told me, ‘The other day, someone tried to flag me down by the side of the road and waved an empty water bottle, and I thought about what happened to you and didn’t stop.’”

“Which of these three do you think was a neighbor to the man who fell into the hands of robbers?” The expert in the law replied, “The one who had mercy on him.” Jesus told him, “Go and do likewise.”

Referring to Trump, Michele Bachmann, the former Republican congresswoman, recently said, “We will in all likelihood never see a more godly, biblical president again in our lifetimes.”

I thanked Todd for her humanity, and for helping save a life. She said her assistance had been instinctive.

“I’m simply a mom who saw a child in need and pulled over to try to help,” she said. “The whole time I was by the side of the road, I was thinking: What country am I in? This is not the United States.”