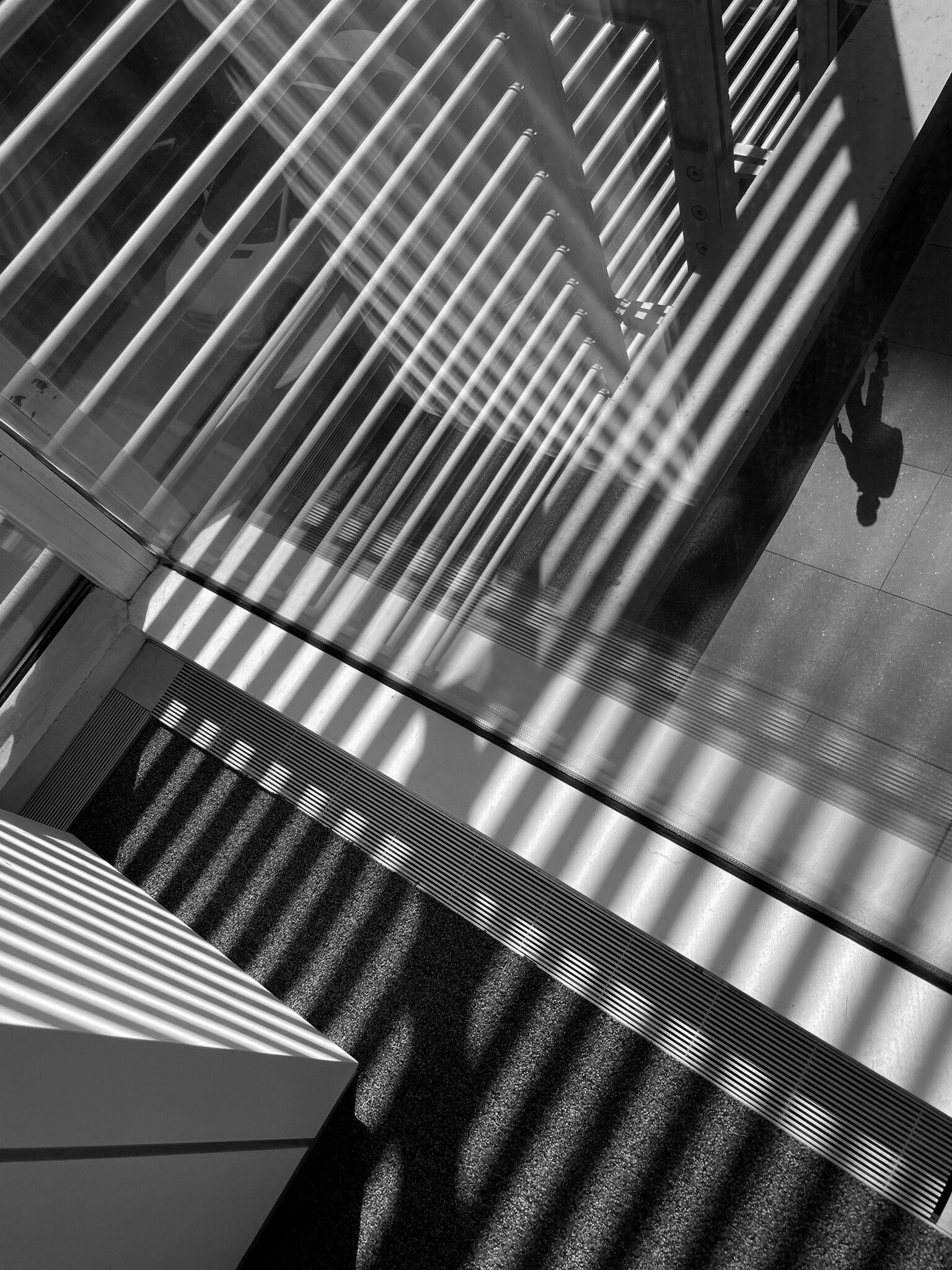 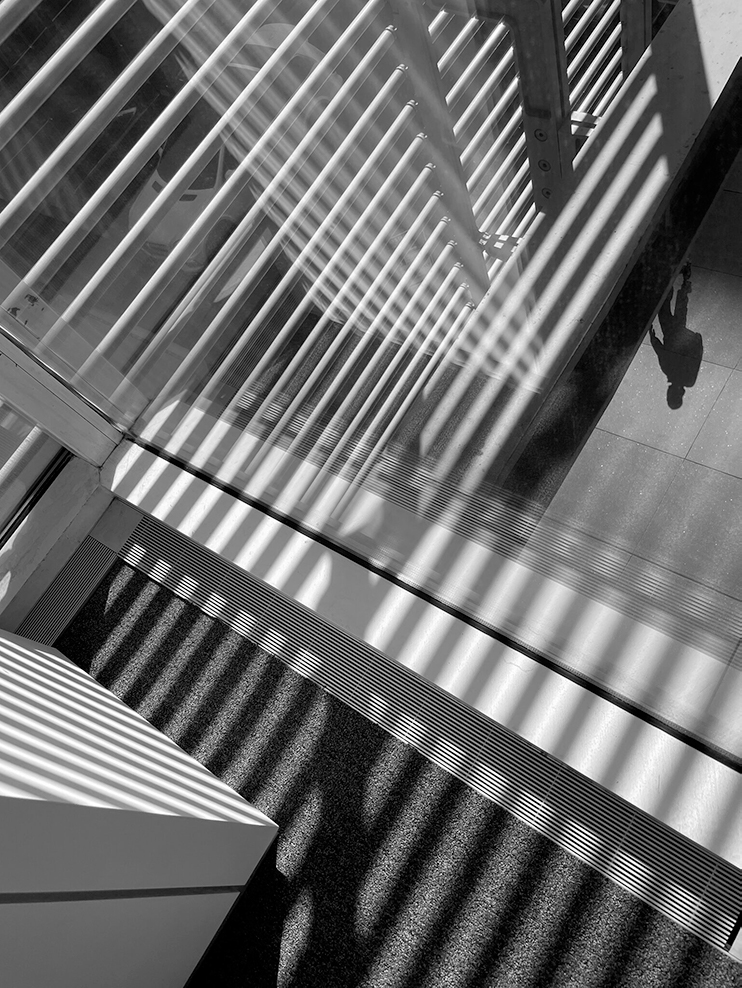 From the shadows, the newsroom beckons, ready to come alive again.

By Kathy Ryan and Maureen Dowd

Ms. Ryan is the director of photography for The New York Times Magazine and author of the photo book “Office Romance.” Ms. Dowd is an Opinion columnist.

I first met Kathy Ryan a few years ago when I needed a new picture of myself for The Times. We met on an autumn afternoon in the New York office that’s been headquarters since 2007.

To be honest, I wasn’t that fond of our new building. It was too sunny, too many windows. It took the metaphor of transparency too literally.

I joked that Kathy couldn’t make my photo look film noirish in this light-drenched skyscraper. I prefer shadows, not least for getting work done.

It turned out Kathy was a noir fan, too, and she told me I was wrong. She coolly guided me past windows that threw slatted shadows Jacques Tourneur would have envied.

As the evening wore on, I began falling in love with the building and gave it my highest film-noir accolade, “Quite a hacienda.” (That’s the opening line of “The Prowler,” a 1951 film noir about a Los Angeles beat cop who answers a call at the posh house of a married woman. You know what happens next.)

Kathy photographed me in black-and-white in front of the gritty urban backdrop of Eighth Avenue, as I channeled a moody Jane Greer.

She explained that we were blessed with dramatic light because of the Renzo Piano horizontal white ceramic rods that sheath the building for environmental reasons. The shadows striping the rooms lend the place a film noir air.

“Cinematographers spend hours trying to make this light that is handed to us in The New York Times building,” she said.

During the pandemic, Kathy missed the building, or 620, as it’s known because it’s at 620 Eighth Avenue, and headed up there on weekends to make pictures of this historic moment. 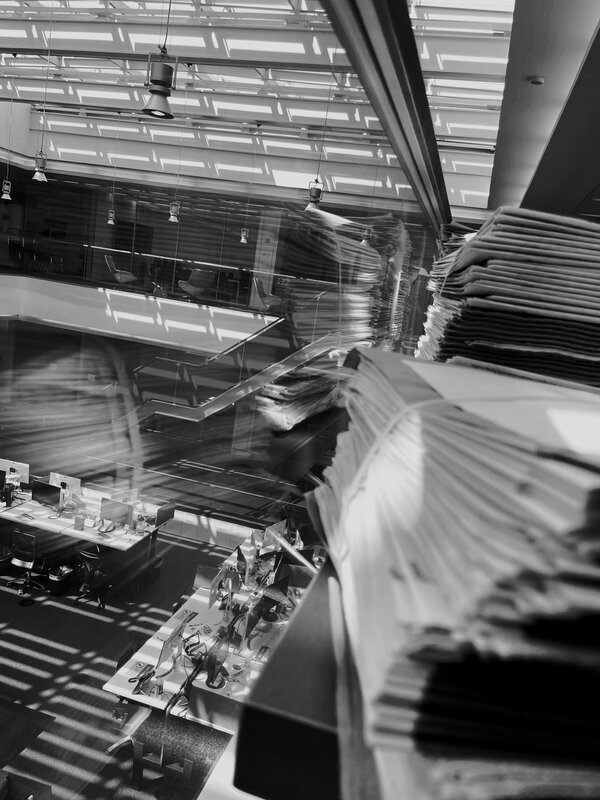 Our old building off Times Square was close to empty for 114 days during the printers’ strike of 1962-1963, our in-house historian David W. Dunlap recalled, and for 88 days during the pressmen’s strike of 1978. But never before, through wars and 9/11 and hurricanes and even King Kong, had our offices been abandoned for this long a stretch.

Jeffrey Henson Scales, our swell photo editor in Opinion, asked Ryan to document the desolate offices, with baby pictures and sunglasses and towers of books left on desks as though they had been forsaken mid-thought, like the mud statues of Pompeii, or Elsa’s frozen kingdom.

Once, the shadows that Kathy and I loved evoked dark glamour, the foreboding and mortality that infuse film noirs, what Turner Classic Movie’s Eddie Muller calls “bitter dramas that slap romantic illusion in the face.”

But now the bitter drama is real. The fear and mortality and slap in the face are real.

There is something profoundly sad about a newsroom without noise or people. Even without crusty editors in fedoras and green eyeshades yelling, “COPY!” or the clicketyclack of typewriters or the roar of the presses in the basement, the modern Times still throbbed with life, creativity and great stories unspooling on every floor.

Kathy’s haunting photos of the Gray Lady speak to the larger picture: deserted offices, all over the world, drained of vitality, preserved in amber, with mail piling up and computer terminals gone dark and plants dying and newspapers left on racks with old headlines like this one from the week we vacated the office in March 2020: “Markets Spiral as Globe Shudders Over Virus.” (We may yet have to use that one again.)

America’s year and a half in limbo has incited an overdue national debate about mobility and fluidity in the workplace. Some predict a looming culture war over cubicles, with fans of RTO (Return To Office) facing off against fans of WFH (Work From Home).

In our digital age, who needs to come in and who doesn’t? How often do we need to come in?

We’re tired of Zoom and miss the novelistic dramas of the office but dread resuming some work rituals that now seem de trop.

I love newsrooms. They are some of the most stimulating rooms in the world. It’s why I became a journalist, to be part of that vertiginous chaos, to scramble chasing stories on deadline with a bunch of hard-boiled hacks.

I haven’t been getting that same frisson hunched at my dining room table.

But other people feel otherwise, and different professions require different things and different bosses have varying philosophies on it, and it will have to be hashed out.

Meanwhile, thanks to the insidious Delta variant, The Times has not set an official date for a return. I will have to wait still longer to be reunited with the part of me that I left at the office.

Kathy’s pictures of our ghost ship are hypnotic. I can’t stop staring at them.

My favorite image is the pile of clocks, stopped at different times when the clocks were taken off the walls. It is an image of time’s defeat, of nature’s power over society, of the disorienting interregnum in our lives, of the hope for the resurrection of those timepieces for the high purpose of being useful to a community of people who work together, side by side.

Also, the photograph reminds me of a noir favorite, “The Big Clock.” Charles Laughton is a wicked media tycoon, Ray Milland a crusading journalist. They work in a Manhattan skyscraper, where the clocks mysteriously stop one night during a murder manhunt. I have the movie poster at home. Where I’m working. Indefinitely.