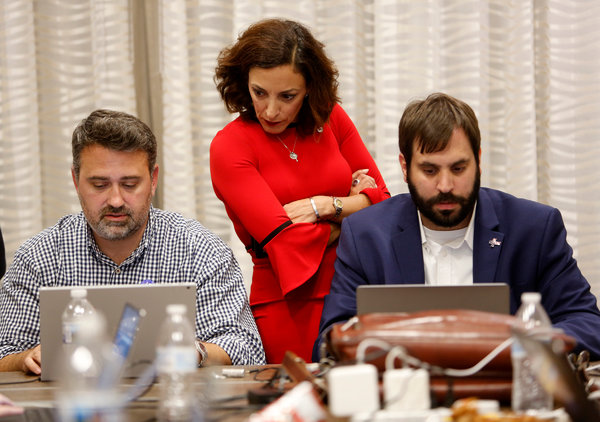 In sports, the team that loses is the team that studies the game-day tapes the hardest. In the military, it’s called an after-action review. Businesses that don’t examine loss die.

But somehow in politics, it’s different. Too often, political figures simply blame the other side — or at least someone besides themselves.

I know this firsthand. In June, after winning three straight elections to the House of Representatives from South Carolina, I lost my primary race to Katie Arrington, who in turn lost last week’s general election to Joe Cunningham, a Democrat. After the general election, Ms. Arrington immediately blamed me for her loss because I did not endorse her.

While it’s human nature to blame someone, what happened here is far bigger than any postelection spin, given that it has been more than 40 years since a Democrat has held this seat, which runs along South Carolina’s coast and leans Republican by 10 points. In fact, there was not a more conservative district in the country to flip to the Democrats.

For this reason, I think the race offers a chance for conservative soul-searching, and I say this as a committed conservative, who just happens not to be Trump enough in the age of Trump.

The normal political dynamics at play in districts across the country held in this race. Both contestants were well financed, and you saw the same midterm drag on the Republican side that you saw in other congressional races.

But three things made this race different — things that could prove instructive for Republicans, if we choose to look at them.

One, the environment matters to voters. As a party, we have somehow forgotten that conservatism should apply to more than just financial resources. Being conservative should entail being conservative with natural resources, too. I’ve always believed this — so much so that the Sierra Club endorsed me in my race for re-election as governor.

Not so many years ago, I was hardly an outlier. But the Republican playbook has changed, and it damages Republicans in suburban districts.

In the primary, Ms. Arrington criticized my stand against offshore drilling and my disagreement with President Trump’s plan to repeal a moratorium on offshore drilling — a moratorium that has held under Republican and Democratic presidents for 37 years. She attempted to pivot away from this stand in the general election, but voters didn’t forget, and Mr. Cunningham was able to use it as a wedge issue.

As Republicans, we’ve drifted from our roots. The party, in fact, has a remarkable legacy on conservation and the environment — and this race suggests we should recommit ourselves to it.

Two, financial irresponsibility proved a drag. Even in a hyperpartisan world, you still need reasons for traditional conservatives like myself to show up. It’s got to be more than the blue team is bad.

One of the underpinnings of the Republican Party has long been financial responsibility, but here, again, the party has drifted. The president has done very little to trim the size of the federal government or entitlement spending, even as he asks for more money for corn farmers hit by his tariffs. That’s hardly motivating for a traditional conservative. We need to once again be the party of not just lower taxes, but less spending.

Third, civility is important. What happened to Ronald Reagan’s notion of being a happy warrior? Like his policies or not, he was pleasant. He smiled. He joked. He played to optimism rather than fear. He and Tip O’Neill, the Democratic speaker of the House, had a famously strong working relationship despite their political differences.

The Republican Party that so many of us care deeply about continues to be held hostage these days, and what I saw last week in a district I grew up in and know well is that there is a half-life to insults, bullying and an embrace of a post-truth world.

I heard it from young soccer moms and longtime Republican voters alike. They don’t want to condone behavior that is counter to what they’ve taught their children.

In this district, my former opponent adopted Mr. Trump’s highly combative style. It worked in the primary, but it fell flat in the general election. Mr. Cunningham presented himself as warm and affable.

Republicans got a wake-up call last week. But will we wake up?

These are not revolutionary ideas. But adhering to the simple approaches of kindness and respect, principles that have long guided society, could these days be groundbreaking.

Mark Sanford is a Republican representative from South Carolina.