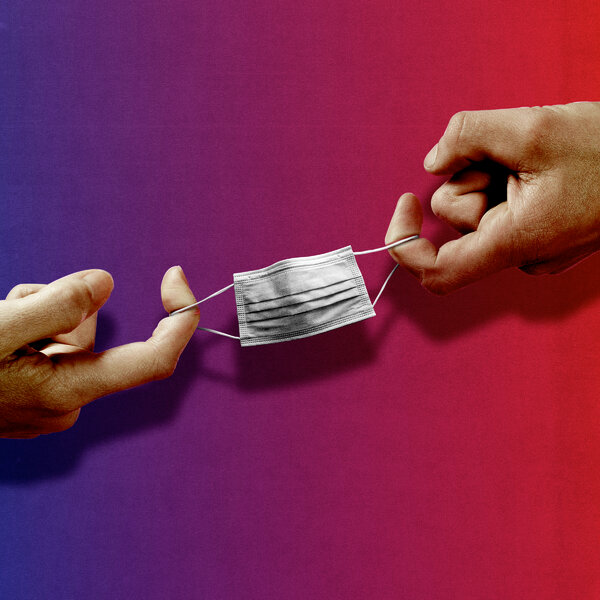 Ms. McKean is a writer based in Midland, Texas.

MIDLAND, Texas — I learned to drive on the back roads of the Texas panhandle, where the long, empty stretches of dusty caliche neatly divide thousands of acres of farm and ranch land. Everyone knew you drove in the middle of the road, particularly during bad weather, so that you didn’t risk sliding into a ditch. If you got stuck in one after a typical summer thunderstorm, you’d probably have to wait until some good-natured farmer meandered by and pulled you out, thankful that you’d given him a story to share with friends at the grain elevator the next morning.

I’ve been thinking, more metaphorically, about the trouble with ditches lately. How ever since social distancing began, red and blue areas of our country have become even more culturally isolated from one another, dug into the norms of our respective partisan trenches.

A few weeks ago, my 10-year-old daughter, Cora, and I walked into an indoor trampoline park. Resuming full-scale kid birthday parties became socially acceptable here in West Texas months ago, but this was our first time back indoors like that. Though many of us were vaccinated, none of the guests wore masks, the place appeared to be at full capacity, and kids were laughing and playing together like it was 2019 again.

Depending on your ZIP code, this tale may make you shrug or shriek. As a mom accustomed to weighing risks facing my children all the time, this felt like a moderate one, taken in exchange for a significant boost to my daughter’s mental and emotional well-being.

As vaccinations pick up, coronavirus cases drop and immunity broadens, our communities nationwide are reopening — but at wildly different paces. And a time that should mostly be dominated by relief and celebration has been overtaken by vitriol and smug regional comparisons. Much of the bickering plays out on the battleground of social media, where competing data sets and cherry-picked anecdotes become fodder for justifying what we already believe.

“Red state” or “blue city,” we all have a tendency to view the pandemic decisions we’ve made as well-considered calculated risks, while deeming other communities’ choices as ill-informed — rooted in either irrational fear or, on the flip side, complete disregard for the well-being of others.

Here in Midland, it’s fair to say we’re in a ditch on the right. Local distrust of Big Government has always been high. Yet the indecipherable and constantly wavering advice from the Centers for Disease Control and Prevention certainly hasn’t inspired confidence in conservative areas like mine. I find myself — someone who had a large and relatively loose pandemic “pod,” but always wears masks indoors when businesses ask for it — torn.

In March 2020, I cried in the shower, wondering how a local culture that seems to value individual liberty above all else could navigate a situation that requires collective cooperation and putting others first.

Initially, I was angry that local leaders didn’t immediately mandate the kind of curve-flattening behaviors I saw enforced in left-leaning communities. But in the fall, when our school district quickly pivoted to a full-time, in-person option after starting virtually, I traded my frustration for gratitude. My second- and fourth-grade girls were getting some normalcy without our paying for private school, the only option available in many progressive places where public schools remained shuttered.

Now with the arrival of spring, the general feeling in town is decidedly prepandemic. Some locals joke that while the pandemic might not be over, we’re over the pandemic. Texas lifted mask mandates and other restrictions on March 10. A few weeks later Gov. Greg Abbott trumpeted results some liberals thought were impossible: “Today the 7-day Covid positivity rate dropped to a new recorded low: 4.95 percent,” he said in a tweet. “Hospitalizations dropped to a 6 month low.”