You know how to Google, how to Uber and how to Netflix and chill. Now, can Jeff Bezos get you to Zoox?

That’s the plan. On Monday, the Amazon-owned Zoox is unveiling an electric autonomous vehicle as part of what will likely be an aggressive attempt by the company to make robo-taxis a thing.

That effort has had a rocky start for Zoox — as well as for Google, General Motors, Uber and several Chinese companies. They have spent billions of dollars over the last decade and suffered all kinds of setbacks, including management upheavals, technology snafus and tragic accidents, all in a quest to remove the driver from the front seat.

Zoox, founded in 2014, was once valued at $3 billion, in headier days for autonomous vehicles. Amazon paid some $1.2 billion for the company earlier this year.

Like a lot of pioneers, Zoox has had its share of challenges, but progress slowed quickly when the pandemic hit. The chief executive, Aicha Evans, and the chief technology officer and founder, Jesse Levinson, told me in an interview last week that the company was forced to temporarily shut down all on-site operations for a while — then had to do so again more recently.

The company also needed capital to survive — either from new investors or a sale. “We definitely thought we could be dead,” said Ms. Evans, referring to when the pandemic hit. “But a crisis like that can also focus you to seek out investors who have a long-term mind-set that this kind of technology requires.”

Enter the e-commerce giant. And the $1.2 billion that Amazon paid for the ambitious car company now looks like a bargain.

“In a nutshell, we want to eventually move people around a city,” said Ms. Evans, who once held a top strategy job at Intel. “It’s purpose built.”

Zoox isn’t the only company taking steps forward. Many are hoping to bring fleets of robotic taxis into the mainstream within the next few years, and a number of them have been making headway in recent months.

The Chinese driverless service AutoX has rolled out in Shenzhen. Google’s Waymo has done the same in a small town in Arizona. The Chinese company Baidu got a permit to test some cars on public roads in heavily trafficked Beijing. General Motor’s Cruise is testing in San Francisco. And Aurora, run by a former Google autonomous executive, acquired Uber’s Advanced Technologies Group for $4 billion (and the car-sharing giant is investing $400 million in the company).

These advances are more interesting in the context of a pandemic. Public transportation, like buses and subways, have seen massive declines in usage. And the Uber investments are particularly noteworthy, since the idea of climbing in a car with an Uber driver has become a much more dicey proposition. (Uber also had some safety and labor problems, as it faced demands to treat drivers like traditional, full-time workers.)

When masks, open windows and other safety precautions are necessary, the idea of a private autonomous car in which you and your family can ride alone has certainly become more appealing. 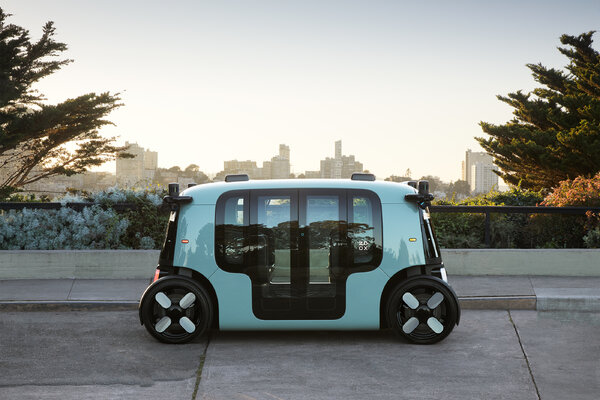 I have always liked the idea of autonomous vehicles, at least since Chris Urmson, the Aurora executive, first showed me the possibilities of robo-taxis six years ago while he was at Google, in a demo of that company’s tiny experimental vehicle.

Looking like a clown car and moving around in a parking lot at Google’s Mountain View headquarters, the car went very slowly and felt like a children’s ride, going around and around in circles. Yet Mr. Urmson was determined: He stood directly in front of the moving vehicle as we headed toward him to show it was safe to do that. (You can watch a video of that encounter here.)

I took a ride in Zoox’s car earlier this year in San Francisco — it was the first time I saw driverless technology in action in the wild. The Dr. Seuss-like name is perfect for the odd-looking box of a car that resembled a Lego on steroids. My spin felt like a ride at Disneyland, with two seats facing two others in a spacious cabin and doors that opened automatically.

We toddled around the hilly city on a prescribed route that the company had been using for tests. People used to seeing all manner of crazy tech inventions rolling around the streets pointed and gave us a thumbs up.

It was a big step up from my first outing in the Google car. Zoox offered a smooth ride and little of the herky-jerky stops and starts of some autonomous travel. And the Zoox car is less threatening than the cars we see on the road today — it’s all smooth edges and rounded corners, taking us adults back to our Little Tikes days.

Still, I have always felt nervous about fully autonomous transportation — no steering wheel, dashboard, pedals or any means of control by the passenger. Up until now, autonomous vehicles have mostly been like retrofitted cars, with a driver at the ready to intervene in case of emergency.

Yet, fears aside, my bigger problem is that I don’t want to buy a car, so I really want these robo efforts to work. As regular readers of this column may remember, I gave up on car ownership almost two years ago. Since then, I have tried all sorts of ways to get around my urban environment, using everything from e-scooters to electric bikes.

Whether the robo-taxi trend will be accelerated, so to speak, depends on a lot of factors, although just moving past the concept stage has been quite a leap.

One concern, beyond safety, is that driverless cars may eat away at public transit, making more transportation private and on-demand. Yet, while all the autonomous efforts are being billed as robotic versions of taxis, these companies are aiming to appeal to a broader range of users over the longer term.

Long term indeed. Like a lot of other self-driving efforts, Zoox’s robo-taxis will not yet be widely available for commercial operations, but will continue to be tested on private roads starting next year at Stanford University’s Linear Accelerator Laboratory. Getting to widespread public usage will take much longer.

That has left me wondering: Is part of Amazon’s game the hastening of autonomous deliveries?

Amazon sees “the scope of the opportunity that is well beyond just saving money on logistics,” said Mr. Levinson, who noted that Zoox still operates independently under its parent, and its focus has been solely on a robo-taxi.

Self-driving cars remain one of the hardest technology challenges around. The advances require not only physical leaps, but also mental ones. Are we ready for this yet?

Ms. Evans understands the hesitancy. “I wanted to build something that I would feel safe to put my two kids in,” she said. “So, I get it.”