Readers praise the president’s speech for offering hope of a return to normalcy while urging that we “not let down our guard.” 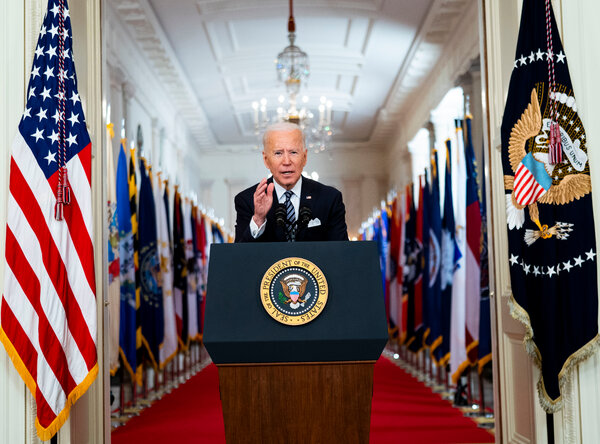 How refreshing and gratifying it is to have a president who displays empathy, passion and compassion for his fellow human beings, who relates to the struggles of the middle class and the poor rather than only the affluent, a leader who reaches out to those who reside in blue states, red states and purple states without favor.

As the president acts decisively to provide hope that an end to the pandemic is in sight, he also emphasizes that we must not let down our guard, that we must continue to endure the slight inconvenience of wearing masks. We are now able to envision a day in which normalcy will return.

I am grateful that President Biden also used his speech to condemn the ugly anti-Asian bigotry that has reared its ugly head.

I do not agree with all of the planks that comprise the $1.9 trillion stimulus bill, but for a change it is legislation that will benefit those in the middle and at the bottom rather than being skewed to those at the top.

Unlike his predecessor, who told us at every turn that we needed him, Joe Biden humbly says, “I need you.” Americans are proud to join him.

The president’s speech to the nation on the anniversary of the onset of the country’s greatest public health crisis in a century was praiseworthy and vintage Joe Biden. It resonates as an affirmation of the resolve and compassion of a leader.

The president convincingly made a case to Americans that he feels their pain, addressing the dual crises of public health and the economy, and demonstrating a level of decency and sensitivity to the nation’s losses normally seen in times of war.

The president did not minimize the challenges that lie ahead, and he encouraged the country to unify and rally to defeat the pandemic through vaccination and vigilance and with common purpose.

Clearly, Mr. Biden has not dodged the reality of a still resilient virus. But his speech conveyed his confidence that the partnership of determined Americans and competent government could soon return the country to the normalcy it craves.