LOS ANGELES — Even as the post-George Floyd national focus on the grand battle against systemic racism and all things Black plateaus, ground battles for equity that have been fought for decades continue. One such fight here in Los Angeles is reaching a critical point.

This battle is over redevelopment of the Crenshaw district, one of the last predominantly Black areas of Los Angeles. Crenshaw comprises both working-class and historic middle-class neighborhoods that sit about halfway between downtown and the ocean. Redevelopment wars date to 1992, when many structures there and in neighboring South Central burned or were damaged during the unrest touched off by the acquittal of four police officers tried for the beating of Rodney G. King.

The structure in question now is the Baldwin Hills Crenshaw Plaza, a 40-acre mall that has been the center of economic aspirations in Crenshaw since the original 1947 open-air shopping center modernized and reopened as an indoor mall in 1988. The mall was not damaged in ’92 but has more or less struggled since, buffeted by two recessions, the collapse and consolidation of big retail, and general political lethargy around redeveloping Crenshaw in any meaningful way.

It’s set to be sold to DHF Partners and to LIVWRK, New York-based major developers that claim they can help transform the mall into a 21st-century lifestyle and retail center. The interest in the project is no doubt inspired by recent gentrification, which as the Black population of Los Angeles dwindles, has brought white people back to the middle-class Crenshaw neighborhoods they fled some 50 years ago.

Twenty-five years ago, this kind of interest from a big player like LIVWRK would have been good news. But the purchase is facing fierce opposition from Downtown Crenshaw Rising, a community nonprofit that has a plan of its own to buy and redevelop the mall and to stabilize businesses. That plan aims to not just preserve Crenshaw’s economy, but the soul of Black Los Angeles itself.

Essentially the plan — which has the slightly pared-down name of Downtown Crenshaw — is about building and keeping Black wealth within the community. It calls for reinventing the mall as an “urban village” that would build on some things that already exist and include retail, park space, offices, affordable housing, a boutique hotel, a cultural center and production studios. For the project, Downtown Crenshaw Rising has enlisted outfits such as SmithGroup, an architectural firm that helped design the National Museum of African American History and Culture in Washington, and MASS Design Group, a Boston-based firm that helped design the National Memorial for Peace and Justice in Alabama.

The driving force behind all of it is Damien Goodmon, a board member of Downtown Crenshaw Rising and the founder of the Crenshaw Subway Coalition, a transportation and racial justice organization that in the last couple of years has turned its attention full time to beating back gentrification. Mr. Goodmon, 38 and a fifth-generation Angeleno, says the Downtown Crenshaw plan is the best way — the only way — to save what’s left of Black Los Angeles from the dead end of traditional top-down development that focuses on short-term profit, not long-term community growth.

“At the end of the day there’s a bucketload of money to be made by gentrification,” says Mr. Goodmon. “The challenge is making sure community isn’t being pushed out. This is not about us getting more sit-down restaurants, it’s about changing a whole system so that we can ensure our future. And it’s all coming to a head.”

Crenshaw Rising submitted its $100 million bid for the mall, complete with proposed financing, in late August. According to Mr. Goodmon, DWS, the asset management firm of Deutsche Bank that has managed the mall since last year, rejected the bid, despite Downtown Crenshaw Rising’s additional offer to pay five percent above the “most credible offer.” 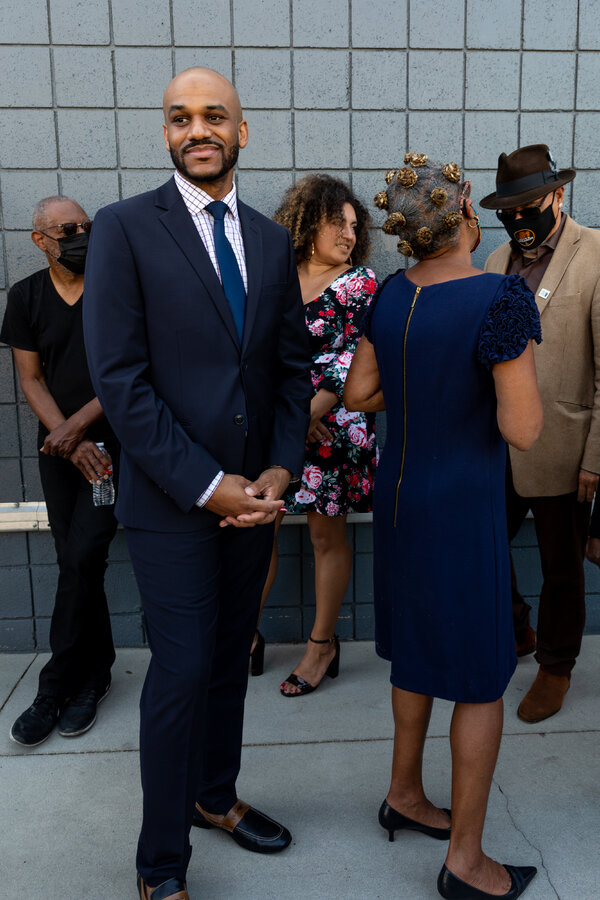 What particularly rankles Mr. Goodmon is that the mall’s fate lies in the hands of a bank known for helping to finance Donald Trump’s businesses. To add insult to injury, LIVWRK itself has a history of partnering with Mr. Trump’s developer son-in-law, Jared Kushner, on its projects in Brooklyn and New York (LIVWRK insists it no longer has ties with Mr. Kushner.) To have this attempt at neighborhood-driven redevelopment thwarted by institutions with ties to an administration that has come to stand in the minds of many Black folks for both racial oppression and capitalist overreach feels particularly painful.

Despite the heated opposition, the sale to LIVWRK is expected to be finalized by the end of the year. Downtown Crenshaw Rising and its advocates are undeterred. Their strategy now is to bypass DWS and appeal directly to the investors who actually own the mall. Recently, the group’s plan was endorsed by several Black elected officials, including the powerful former Los Angeles City Council president, Herb Wesson — a sign that the political reticence around the matter is breaking.

The community’s taking on a complicated development project like this is new and frankly, exciting. As a reporter for The Los Angeles Times in the aftermath of the unrest in 1992, I went to countless community meetings about rebuilding, and what I mostly heard was a clamor for retail justice — getting the same shopping and service amenities in Crenshaw that are taken for granted in whiter, more affluent neighborhoods west of it. Convincing retail chains like Nordstrom, Trader Joe’s and Victoria’s Secret that they could successfully locate in a “urban” neighborhood like Crenshaw was a civil rights fight refashioned for an age of respectability. Unrest was best countered by the stabilizing presence of quality stores and goods that said to the world that a Black place like Crenshaw was normal. We didn’t need to build anything so much as just recruit it.

We’ve moved very far past this modest vision. Unrest, once widely criticized as a hindrance to change, now seems fundamental to it. Black people aspiring to normal or status quo feels out of the question. The ideal Black living space is no longer defined by the presence or absence of big companies and brand-name chains, if it ever was. The new livable space is one forged by self-determination and self-preservation in which the community has a real say and a stake — not merely an advisory role — in what gets built, and for whom. The ideal is major economic development that is also Black empowerment, two things that have been at odds in the real world for a long time.

Mr. Goodmon says he is betting that the momentum around antiracism — and more important, around pro-blackness — will help Downtown Crenshaw Rising prevail, and to establish in Crenshaw a new normal of agency and prosperity. That’s exactly what Black people here have wanted for the last 30 years. We just didn’t know what it looked like.