Re “In Clash on Virus, Harris Puts Pence on the Defensive” (front page, Oct. 8):

Why even have a debate? Both sides avoided direct answers, and the moderator was worthless in controlling time or topics. Vice President Mike Pence did not answer direct questions and changed subjects from his first utterance. Senator Kamala Harris was a bit better, but the losers were the viewing public.

One thing is clear: The Trump administration has nothing to brag about. If it did, Mr. Pence could have answered the direct questions with positive answers, but his evasive tactics made it evident the administration cannot support its atrocious record.

If you want to put the public through this, put each candidate in a plexiglass box and give the moderator a gavel and control over their microphones. It may seem disrespectful, but these debates are disrespectful to the American public.

The American public lost again. The premise of the debate is at fault: Nine topics in 90 minutes does not allow for a dialogue. The interaction between the vice-presidential candidates was polite, thankfully, but we heard only sound bites from Vice President Mike Pence either praising the president, rehashing the same false statements that the president has been espousing all year or ducking hard questions. Like his boss, he was prone to interrupting.

To her credit Senator Kamala Harris showed herself to be an intelligent and knowledgeable leader who comes armed with and presents facts. She is the clear choice for the next vice president of this country.

As a woman, I hated Mike Pence’s disrespect for the women with whom he interacted on the stage.

As a psychologist, I fear that Mr. Pence’s disregard for the rules of the debate reflects the entitlement and abuse of power so endemic to this administration.

It should not pass unnoticed that Vice President Mike Pence was unable to articulate a Trump administration plan that would ensure affordable health care for the 20 million Americans who would lose health insurance if the administration wins its bid to terminate the Affordable Care Act. Nor could he speak to a proposal to require insurance companies to cover without discriminatory rates those with pre-existing conditions.

During the first two years of the Trump presidency, Republicans controlled both houses of Congress. They could have enacted a health plan and protected coverage for pre-existing conditions. If the current administration is re-elected, we are on our own to deal with the rapacious health, insurance and pharmaceutical industries. If it were otherwise, Mr. Pence would have told us. He declined to do so. 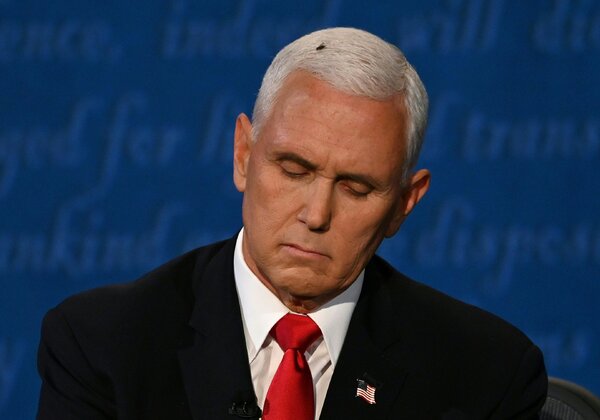 You report, “A fly sat atop Mike Pence’s head for two minutes during the V.P. debate” (nytimes.com, Oct. 8).