Ending a relationship is hard, but telling mutual friends and loved ones you've split can be even harder. Fortunately, the people at Instagram Stories have your back. They've provided a foolproof method for the romantically bereaved to broadcast the message “I am really going through a breakup” without ever having to say “We just wanted different things” to an acquaintance on the street. If you're too nervous and/or cowardly to tell your wider social circle and a boss from three jobs ago that you recently broke up with your partner, just post one or two of these stories. They will know. 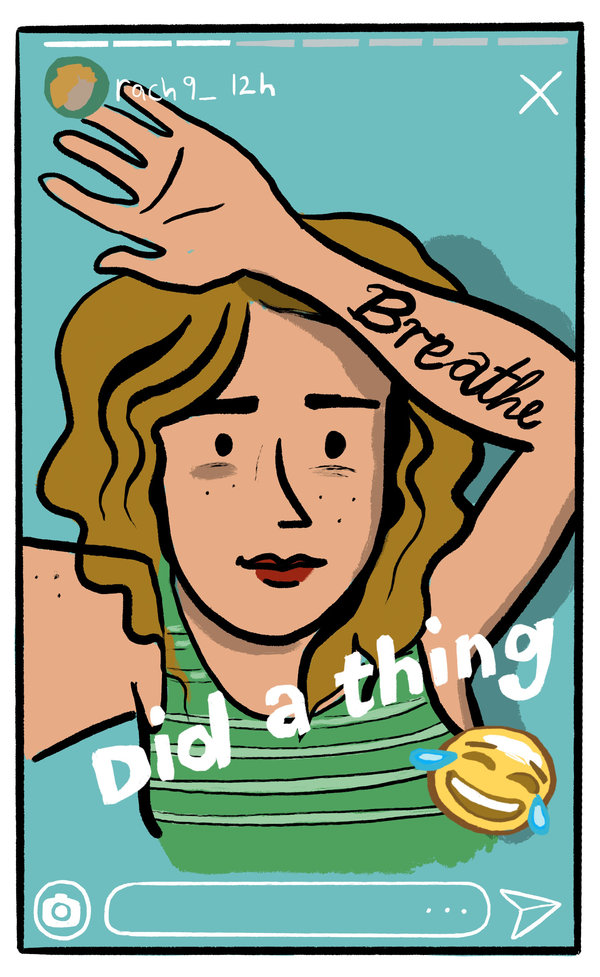 In many states a divorce is not considered finalized until both parties have gotten poorly considered mantra tattoos. Basically any imperative will work, but try to keep things in the “might be easily printed on the packaging for a detox tea” realm. If you cannot bring yourself to roll the dice on an emotionally meaningful tattoo, a picture of a sunset with a quote about growth will do.

As Many Selfies as You Feel Comfortable With (5+)

Experiment with the bulldog filter. Try a Kylie Jenner lip. Make a prism of your floating, crying face. Post a bunch of them in a row in a way that says “I’d like attention and also to be left alone to die.” Throw the sex cat face on there and write something sarcastic in glowing cursive. It’s fun! Kind of!!

“Grateful for this one, today and everyday.” “Early morning yoga with Janet, my actual rock.” “Yes, Michael is technically a mall parking attendant I just met but he has been comforting me since Our Song came over the food court sound system … he seems genuinely worried and I like that about him!!!”

Singing or Dancing of Any Kind

Felt like setting up the camera to have a little dance on your own, did you? Simply were compelled to record a six-part ukulele cover of the “Friends” theme song, but done slow and in a sort of honking vintage-y voice? Merely a 34-year-old man expressing himself via piano for the first time in a while? You know what, you can have that one.

Just Some Thoughts You Had, Suddenly

Do not reference your breakup at all, but do spend a good four to seven minutes explaining to no one/the camera that you’ve been “thinking a lot about change recently.” Show off a few books that have really been speaking to you. Pema Chodron is a great start, Maggie Nelson’s entire oeuvre also works. Remind everyone your DMs are always open if anyone wants to “throw some ideas around about life, taking chances, whatever.”

Do a lighthearted monologue to camera, having lightheartedly forgotten to get dressed. The plot of your videos can be as thin as the crop top under which you are definitely not wearing a bra: Overhear something funny at the grocery store? Experience an unexpected wait time for public transit? Just … saw a dog? Show everyone you're dusting off your sexuality by sharing a fun anecdote and a little bit more than that, too.

Near-Daily Updates on Your Fitness ‘Progress’

No one likes going to the gym that much, you are simply having a breakdown.

Monica Heisey is a writer on the “Baroness von Sketch Show” on IFC and the author of “I Can’t Believe It’s Not Better: A Woman’s Guide to Coping With Life.” Jason Adam Katzenstein is a cartoonist whose work is frequently featured in The New Yorker.