In India, parents are being aggressively sold the idea that their children must start coding at 4 or 5 or be future failures.

Mr. Misra is a writer and audio storyteller in Lucknow, India. 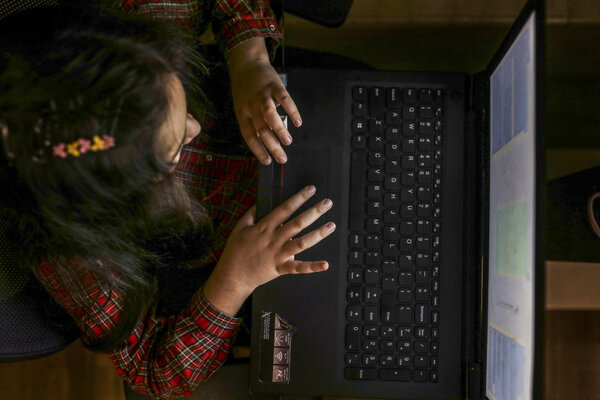 LUCKNOW, India — I am a parent, and this is my little mutiny. I withdrew my 5-year-old daughter, Vaidehi, from her school in this northern India city. The school had 110 students joining each online class, all of them instructed to be in their school uniforms. India has about 10 million coronavirus cases now, and schools have been offering online instruction since March.

Taking my daughter out of our city’s most sought-after school for girls came some months after a moment that became a turning point. Vaidehi’s teacher had sent us a note saying: “The parents need to pay more attention at home and work with her. Vaidehi drew a giraffe in her art class that was multicolored.”

My daughter has been a storyteller on YouTube since she was 3. She talks to Chanda the cow and Rambo the calf at our village home; she loves to wrestle in the mud and soak in the rain. I increasingly felt that the teachers were not recognizing children for their unique capabilities but were trying to turn them into clones of one another.

After the outbreak of the coronavirus, her school went online in March and a faceless screen rose between Vaidehi and her classmates. Around then, unknown to my little daughter, Karan Bajaj, an Indian entrepreneur, signed a $300 million deal to sell his company WhiteHat Jr. to Byju’s, the world’s largest educational tech company.

WhiteHat Jr., which operates in India and the United States, mounted an advertising blitzkrieg in India telling parents that our children need to learn coding from the age of 4, 5 or 6 — or they will fall behind in life. Indian celebrities promoted the brand and spread the fear of losing out among families.

WhiteHat Jr. was forced to take down five of its advertisements after the Advertising Standards Council of India, a self-regulatory body, found them in potential violation of its code.

But the campaigns continue. Hrithik Roshan, one of the most prominent Bollywood actors and the father of two boys, endorsed the brand in a television campaign, where he was anxious about the utility of the skills Indian children are learning today and saw hope and promise for their future in learning coding on WhiteHat Jr.

Although numerous experts advise against teaching children to code, a skill that will soon become redundant, the WhiteHat Jr. campaign taps into a parent’s deepest fear: Will my child be left behind?

Unemployment has remained a great concern in India over time, and parents forced their children, irrespective of their aptitudes, to become doctors or engineers or to get management degrees because of the fear that if their children did not join any of those professions, they were certain to be failures.

Mr. Bajaj, who studied engineering and management at Indian colleges, is a product of that era, when parents sold land and jewelry and depleted their savings to send their children to engineering and medical colleges. At any school of medicine in the Soviet Union, and later in Russia and Central Asia, you would find a bunch of Indian students.

So far, India’s children have been spared from being thrown under the wheels of the education industry juggernaut. Although the Indian economy has gone into a recession in the wake of the coronavirus pandemic, in the past several years American and Chinese investors put millions of dollars in businesses that are in a rush to scale up. In this ambitious sweep, previously untrod territories — like fantasy cricket apps, online casinos and businesses such as WhiteHat Jr. that challenge conventional norms about childhood and education — are not taboo anymore.

Relentless advertising campaigns are telling Indian parents that coding is critical because making children code will develop their cognitive skills. Storytelling does all that too. And singing songs. And asking questions or being offered choices or visiting interesting places. Vaidehi chose to become a storyteller like me when she was 3, storming into my studio one afternoon when I was recording. Her story about the monkey and the black dress he wanted from his mama — which she made up as she went along — was logical and had a beginning, middle and end.

Aggressive campaigns pushing Indian parents and schools to embrace coding might help meet corporate targets, but they are creating a fear that a generation of children will lose out if their parents don’t sign them up for these coding programs. Parents struggle to resist these shrewdly framed campaigns.

In 2019, I showed the first tentative signs of my mutiny when I asked Vaidehi’s teacher at a parents-teacher meeting, “Why can’t a giraffe be multicolored?” The question did not get a satisfactory reply, but it was a moment of a clash between the childhood and education that we had envisioned for our daughter and the one that her education system was giving her.

In the world that millions of parents want for their children, a giraffe could well be multicolored. At her new school, Vaidehi’s screen time is substantially reduced. When she joins online, she loves telling stories to her class, singing songs with the other kids, learning how to dance even if she follows the teacher’s steps only onscreen. I see a remarkable change in her just because she can be herself.

I realize that our world is about to change unrecognizably. Robotics, artificial intelligence and virtual and augmented reality shall soon be concepts and a way of living that will be second nature to our children. The future should excite us, not make our children feel afraid and ill equipped. The future should — and I am sure will — have a place for dreamers and doers, and not just those hunched forever over a computer.

I want my little daughter to grow up in a world where her brain can evolve not only if she knows how to code, but because she can still play with Chanda the cow and Rambo the calf, wrestle in mud and soak in rain, and question the sauntering millipede. Yes, a giraffe can be multicolored.

Neelesh Misra is a writer, an audio storyteller and the founder of The Slow, a media and organic products company.