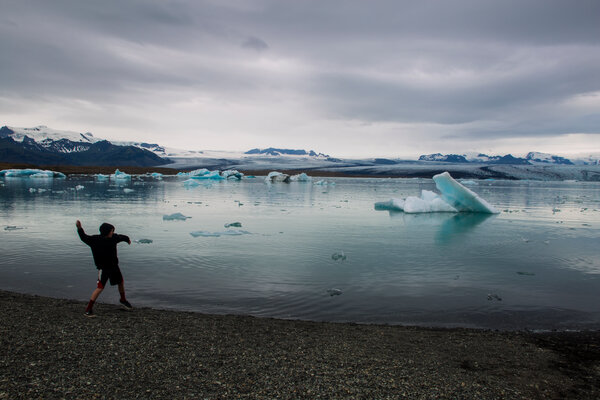 Over the past few years, I’ve been asked one question more than any other. It comes up at speeches, at dinners, in conversation. It’s the most popular query when I open my podcast to suggestions, time and again. It comes in two forms. The first: Should I have kids, given the climate crisis they will face? The second: Should I have kids, knowing they will contribute to the climate crisis the world faces?

And it’s not just me. A 2020 Morning Consult poll found that a quarter of adults without children say climate change is part of the reason they didn’t have children. A Morgan Stanley analysis found that the decision “to not have children owing to fears over climate change is growing and impacting fertility rates quicker than any preceding trend in the field of fertility decline.”

But one thing I’ve noticed, after years of reporting on climate change: The people who have devoted their lives to combating climate change keep having children. I hear them playing in the background of our calls. I see them when we Zoom. And so I began asking them why.

“I unequivocally reject, scientifically and personally, the notion that children are somehow doomed to an unhappy life,” Kate Marvel, a climate scientist at Columbia, told me.

To bring a child into this world has always been an act of hope. The past was its own parade of horrors. The best estimates we have suggest that across most of human history, 27 percent of infants didn’t survive their first year and 47 percent of people died before puberty. And life was hard, even if you were lucky enough to live it.

As Dylan Matthews writes at Vox:

What today we’d characterize as extreme poverty was until a few centuries ago the condition of almost every human on earth. In 1820, some 94 percent of humans lived on less than $2 a day. Over the next two centuries, extreme poverty fell dramatically; in 2018, the World Bank estimated that 8.6 percent of people lived on less than $1.90 a day. And the gains were not solely economic. Before 1800, average life spans didn’t exceed 40 years anywhere in the world. Today, the average human life expectancy is more like 73.

No mainstream climate models suggest a return to a world as bad as the one we had in 1950, to say nothing of 1150. Was the world so bad, for virtually the entirety of human history, that our ancestors shouldn’t have made our lives possible? If not, then nothing in our near future looks so horrible that it turns reproduction into an immoral act.

I worry, writing this, that it will be taken as a dismissal of the suffering climate change will unleash. It’s not. An appreciation of how bad our past was should deepen our fury at how recklessly our future is being treated. We have done so much to build a sea wall between us and the pitiless world. We have done so much to make the future better than the past. To give back any portion of those gains or even to prevent the progress we could otherwise see is worse than a tragedy. It is a crime.

But that, and not apocalypse, is the most likely path we’re on. This, strange as it is to say, is progress. As Zeke Hausfather, a climate scientist, notes, many credible estimates from a decade ago put us on track for the average global temperature to increase 4 or even 5 degrees Celsius from preindustrial levels by 2100. That would be cataclysmic. But the falling cost of clean energy and the rising ambition of climate policy has changed that. The Climate Action tracker puts our current policy path at about 2.7 degrees of warming by 2100. If the commitments world governments have made since the Paris climate accord hold, we’re on track for a rise of 2 degrees or even less.

And there is still more reason for optimism. One of the truly thrilling papers I’ve read in recent years carried the plodding title “Empirically Grounded Technology Forecasts and the Energy Transition.” The authors looked at more than 2,900 forecasts for how fast the cost of installing solar power would fall from 2010 to 2020. The average prediction was 2.6 percent annually. No prediction was above 6 percent. But solar power costs actually fell by 15 percent per year. Other technologies have seen similar drops in costs. If these curves hold in the future — and they could well steepen if backed by better policy — then we are, even now, underestimating the possible path of progress.

But hope is not a plan. And no one should mistake 2.5 degrees of warming — or even 2 degrees — for success. We will have caused incalculable damage to ecosystems. We will have worsened droughts, floods, famines, heat waves. We will have bleached coral reefs, acidified the ocean, driven countless animal species to extinction. Millions, maybe tens of millions, of people will die from increased heat, and more will be killed by the indirect consequences of climate change. Far more yet will be forced to flee their homes or live lives of deep poverty or suffering. We will have stolen the full possibility of their flourishing from them.

All of that, though, also describes the world we inhabit, not just the world we’re creating. Climate models force us to confront vast expanses of future suffering that, if they were ongoing around us, we might fail to see. As my colleague David Wallace-Wells — a father of two and the author of “The Uninhabitable Earth,” as well as a must-read newsletter — wrote to me, “What looks like apocalypse in prospect often feels more like grim normality when it arrives in the present.” Oof.

This is no mere abstraction or prediction. The evidence that we ignore mass suffering is all around us. We are ignoring it right now, just as we did yesterday, and just as we will tomorrow. “An estimated 20 million people died of Covid, and now we’re over it. What do we make of that?” Wallace-Wells wrote to me. “Ten million people a year are dying of air pollution. What do we make of that? And what does it tell us about climate change, which is quite unlikely (as I wrote in my big piece on pollution) to ever kill as many as now die from particulates?”