The Cuban performance artist Luis Manuel Otero Alcántara’s home in San Isidro, one of Old Havana’s poor and majority-Black barrios, lies steps away from Cuba’s National Archive and the childhood home of José Martí, Cuba’s exalted 19th-century hero and fighter for racial justice. The promises of history and the grinding realities of life after 62 years of Communist rule collide in San Isidro.

Mr. Otero Alcántara is a founder of the San Isidro Movement, a group of writers, artists and intellectuals who are openly challenging the state’s claims that the Castro-led revolution eliminated racism and that Cuba’s particular brand of socialism has served the poor more than the state. Like others before him, Mr. Otero Alcántara has paid dearly for his activism. Since 2017, Cuban state security has arrested the artist dozens of times, kept him under constant surveillance, seized his art and subjected him to repeated interrogations and a defamation campaign led by state media.

Access to social media, which has become widespread only in the past two years, has provided an outlet for self-expression for artists like Mr. Otero Alcántara on an island where the narrative has long been carefully crafted by the state. In the protest anthem “Patria y Vida,” or “Fatherland and Life,” a rebuke of the revolution’s slogan, “Fatherland or Death,” written by various musicians and released on YouTube in February, Alexander Delgado of the Grammy-award-winning group Gente de Zona sings:“No more lies! My people are asking for freedom! No more indoctrination!” Mr. Otero Alcántara makes a cameo in one scene, brandishing a Cuban flag. The video received nearly five million views in a few weeks. It angered Cuban officials, who attacked the artists as “traitors” spouting imperial “vomit.” On April 26, the police arrested one of the singers, Maykel Castillo, known as El Osorbo; his whereabouts remain unknown.

A Castro is no longer running Cuba, yet we are witnessing a return to Soviet-style tactics to control ideas and silence public criticism. Cuban officials are using the regime’s old playbook — arrests and intimidation — to crush oppositional voices.

Between the late 1960s and the 1980s, Cubans were subject to legal codes that criminalized attitudes, beliefs and behaviors the government considered a threat to national sovereignty. Embracing certain ideas, musical tastes and even fashion that Cuban officials found politically offensive were punishable offenses. Tens of thousands of citizens endured humiliating public trials on the charge of promoting counterrevolution; they endured years of re-education at state labor camps for encouraging doubt about the viability of state policies or the justice of Communist Party mandates.

Overt expressions of Black consciousness and demands for public examination of racism in revolutionary Cuba were met with discrimination and repression. Practitioners of Santería, a religion that originated in colonial Cuba by slaves, faced prison sentences of up to two years. Black Communist Party members like the filmmaker Nicolás Guillén Landrián and the writer Walterio Carbonell, who’s work was critical of the government, faced censorship, hard labor, psychiatric torture and worse.

On April 25, Mr. Otero Alcántara started a hunger strike after the police raided his home and confiscated or destroyed some of his artwork. After eight days, state security agents forcibly took him to a Havana hospital, and kept him in custody. On May 4, a video of the artist surfaced on his government-assigned doctor’s personal Facebook account. A visibly thin Mr. Otero Alcántara straightened the doctor’s collar, shared a laugh and then thanked his captors for their excellent treatment.

How a man who only days earlier taunted the government could suddenly change his mind is a case study in how Cuba’s Communist state has kept its grip on power for decades. We don’t know what his treatment has been. But the implication now is that he wasn’t a credible activist for change. He was just crazy all along. Has Mr. Otero Alcántara’s apparent about-face been brought on by the same psychiatric torture others have been subjected to? 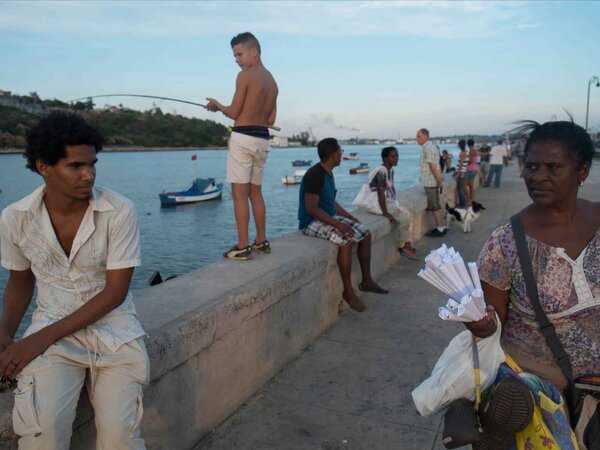 Indeed, Mr. Otero Alcántara’s state-sponsored performance was not new. The authorities have done this before, to the Cuban poet Heberto Padilla. Mr. Padilla used his art to issue scathing critiques of the Communist state. He too joked and expressed gratitude toward his captors in a 1971 filmed confession, scripted and extracted under pressure by the Cuban government.

Unlike Mr. Padilla, who was born and raised before the revolution, Mr. Otero Alcántara and other Cuban musicians and artists and the millions who support their right to protest are products of it. Many are Black and poor, the very people who for 62 years the regime claimed represented the greatest pillar of support. Yet the state’s championing of their cause was based not only on assertions that anti-Black racism and deep poverty ceased to exist in Communist Cuba, but also on the silencing of anyone who dared to claim that the opposite was true. Saying racism and poverty continued — despite Communism or perhaps because of it — remains as much a taboo as it was in the 1960s and ’70s.

Today words, ideas and a commitment to peaceful protest are no less powerful threats to the Cuban state. The legal apparatus of the Communist Party’s security state rests on a new 2019 Constitution. It not only mandates the singular right of the Communist Party to rule but also obligates all citizens to support the party’s vision of socialism. Cubans are free only to agree with the government. But the revival of Soviet-style political controls is a fruitless endeavor. Social media has given Cubans a new way of creating content and carrying out artistic protest, and there is simply no turning back to the way things were.

In recent video posts, Mr. Otero Alcántara appears debilitated and incoherent. He asked for his mother, even though she died in January. The Cuban government must release him as well as the 10 other artists, independent journalists and protesters jailed for supporting him. Communist leaders have long used the U.S. embargo on Cuba to claim that citizens who are critical of the government are agents of U.S. imperialism. Ending it will flood the island with the very weapons the government fears: ideas, debate and opportunities.

Those who call for peaceful protest and public reckoning are not the enemies of Cuban sovereignty, prosperity and racial equality. They are Cuba’s greatest hope.

Lillian Guerra (@Lillian_Guerra) is a professor of Cuban and Caribbean history at the University of Florida. She is the author of “Heroes, Martyrs & Political Messiahs in Revolutionary Cuba, 1946-1958” and “Visions of Power in Cuba: Revolution, Redemption, and Resistance, 1959-1971.”