Mark Doss, a supervising lawyer at the International Refugee Assistance Project, pulled an all-nighter on Jan. 27, 2017, and his work life has not been the same since. On that day two years ago, his client Hameed Darweesh, an Iraqi who had worked primarily as an interpreter on behalf of the United States government for 10 years, was the first person detained at Kennedy Airport under President Trump’s executive order barring immigrants from seven predominantly Muslim countries, including Iraq.

Images of immigration lawyers huddled together over laptops on airport floors across the country made global news. Nineteen hours and a habeas corpus petition titled Darweesh v. Trump later, Mr. Darweesh was the first detainee to be released. Mr. Doss was able to comfort his weeping client at baggage claim.

When you’re an immigrant to the United States, you come to rely on a selection of people you never expected to need as guides. The co-worker who explains that aluminum is both spelled and pronounced incorrectly here, the waitress who advises against ordering that second cold brew and, crucially, the immigration lawyer who can push open the door to a new life, a whole country.

I moved here five years ago in a relatively straightforward way, but one that still involved much paperwork, expense and anxiety. Amanda Gupta, who specializes in visas for artists and entertainers, was my lawyer. It’s because of her I get to live my own peculiar American dream, which is to have a comedy career and drink as much cold brew as I can before my heart explodes.

That first travel ban, and each subsequent one, made my stomach lurch, as I imagined not being allowed back into the place I belong. And since that chaotic weekend two years ago, I have wondered what life has been like for immigration lawyers — people whose livelihoods depend on getting others through a door that was only ever ajar and is now in danger of slamming shut.

As the administration hacks away at immigrants’ rights and rains down policy changes, immigration requests that would usually have been approved are denied, many lawyers told me. They are receiving requests for further evidence that are baffling, with precedents continuously blurring. “Any way the government can have a moment of ‘gotcha’ they do and they will,” Ms. Gupta said. “If they can get you out of the country, they will.”

John Khosravi, an immigration lawyer in Los Angeles, agrees. “These past two years it’s like someone is running around sticking their finger in people’s eyes and I’m an eye doctor,” he said. “Sure, business is good, but those aren’t the injuries I want to treat.”

On his podcast “The Immigration Lawyers Podcast,” he urges his colleagues to have a Plan B and to save their money for a rainy day. Mr. Khosravi is Iranian-American, and when he started practicing nearly a decade ago, all of his clients were Iranian. Since then, he has diversified and now has clients from around the world. “Had I just been starting out when the ban came down, that would have been lights out, just no way,” he said.

For Lauren Blodgett, a staff lawyer at Safe Passage Project, the past two years have seen her definition of success change. She has represented children seeking asylum who were separated from a parent at the border, per the policy put in place by this administration last year. She said that even if her clients are denied a chance to stay in the United States, it’s crucial to her to help them feel heard and even loved throughout the process.

“They will remember their case for the rest of their lives,” she said, adding that it’s a privilege to get to do this kind of difficult work. She has sometimes had to tell 8- or 9-year-olds that she honestly has no idea whether they will see their parents again.

What, I asked, could one possibly do to unwind after a workday that involved those conversations? Twice a month, Ms. Blodgett goes to a dance party that takes place from 6 to 9 a.m. “We dance and then, some days, I go to straight to court,” she said. “I bring my suit and change in the bathroom.”

At the end of our conversation, I asked her whether she ever feels hopeless, and she looked at me surprised, the same way I looked at her when she told me she voluntarily goes to early-morning raves. “This work is an opportunity to turn your rage and anger and disgust into action,” she said. 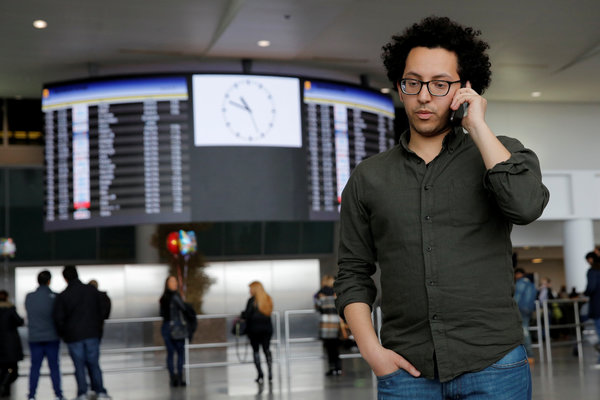 Mr. Doss married last year and spent the days before his wedding finalizing a waiver application for a woman stranded in Yemen because of the travel ban to be reunited with her children in the United States. His wife’s brother, a graphic designer in Jordan, was denied a visitor’s visa, so he could not be with them on their wedding day.

“It’s heartbreaking,” he told me, particularly for his new in-laws, but his perspective quickly broadened. “For my clients from Syria or Yemen or Libya who are trying to reunite with their loved ones in the United States, they’re indefinitely banned.” He worries that these separated families have been forgotten about, lost in the mix of everything else that has happened in the past two years.

The number of globally displaced people has hit a record high, and last year the Trump administration set the lowest cap on the number of refugees who can be resettled in the United States since Congress passed the Refugee Act in 1980. I asked Mr. Doss what his clients, refugees who have made it through, feel about arriving in a country run by people who do not seem to want them here. “They are often fleeing from governments that have persecuted them, but they have a deep love for the country,” he explained. “So they’re able to separate the government from the people. Most Americans, when they’re face to face, are kind and caring.”

The phone line went quiet for a second and I worried we had been disconnected, until he cleared his throat and added, “I think.”

Maeve Higgins is the author of “Maeve in America: Essays by a Girl From Somewhere Else” and a contributing opinion writer.