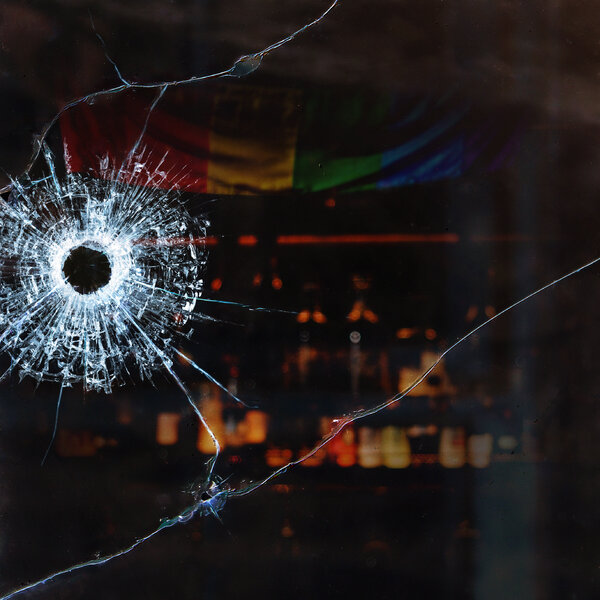 By The Editorial Board

The editorial board is a group of opinion journalists whose views are informed by expertise, research, debate and certain longstanding values. It is separate from the newsroom.

This editorial is the sixth in a series, “The Danger Within,” urging readers to understand the danger of extremist violence and possible solutions. Read more about the series in a note from Kathleen Kingsbury, the Times Opinion editor.

Whoever shot the small steel ball through the front window of the Brewmaster’s Taproom in Renton, Wash., this month wasn’t taking chances. The person wore a mask and removed the front and rear license plates of a silver Chevrolet Cruze. The police still have no leads.

The Taproom sits in a two-story office park a 15-minute drive from downtown Seattle. It has a little outside patio and about two dozen local craft beers on tap. Dogs are welcome. A sign on the door reads: “I don’t drink beer with racists. #blacklivesmatter.” Now there’s also a note with an arrow pointing to the hole in the window reading: “What intolerance looks like.”

Ms. Rall knew how protests like this could escalate. There was an incident in 2019 at a library drag queen story hour about 10 minutes from the bar, where members of the Proud Boys and other paramilitary groups got into a shouting match with supporters of the event.

Was the shot at the Taproom a warning? She had no way to know, so she kept the event on the calendar.

Sitting in a corner of the Taproom a few hours before her story time was set to begin, Sylvia O’Stayformore said she didn’t care if the Proud Boys showed up to an event that was aimed at teaching children empathy. Protesters or not, she had a show to put on. “I’d never be intimidated by all this,” she said.

Far-right activists have been waging a nationwide campaign of harassment against L.G.B.T.Q. people and events in which they participate. Drag queen story events are similar to other public readings for children, except that readers dress in a highly stylized and gender-fluid manner and often read books that focus on acceptance and tolerance. This month alone, drag queen events were the target of protests in Grand Prairie, Texas; San Antonio; Fall River, Mass.; Columbus, Ohio; Southern Pines, N.C.; Jacksonville, Fla.; Lakeland, Fla.; Chicago; Long Island; and Staten Island.

On Monday, protesters vandalized the home of a gay New York City councilor with homophobic graffiti and attacked one of his neighbors in protest of drag queen story hours held at libraries.

The protests use the language of right-wing media, where demonizing gay and transgender people is profitable and popular. Tucker Carlson, a Fox News host who rails against transgender people and the medical facilities that serve them, has the highest-rated prime-time cable news program in the country. Twitter personalities with millions of followers flag drag events and spread anti-trans rhetoric that can result in in-person demonstrations or threats. Facebook pages of activist groups can mobilize demonstrators with ease.

Some Republican lawmakers are using the power of the state in service of the same cause. Several states are trying to restrict or ban public drag shows altogether, amid a record number of anti-L.G.B.T.Q. bills introduced this year. Republican politicians also used a barrage of lies about trans people in their campaign ads during the midterm elections, funded to the tune of at least $50 million, according to a report released in October from the Human Rights Campaign Foundation.

This campaign isn’t happening in a vacuum. Levels of political violence are on the rise across the country, and while some of it comes from the left, a majority comes from the right, where violent rhetoric that spurs actual violence is routine and escalating. At anti-L.G.B.T.Q. events, sign-waving protesters are increasingly joined by members of the street-fighting Proud Boys and other right-wing paramilitary groups. Their presence increases the risk of such encounters turning violent.

In a series of editorials, this board has argued for a concerted national effort against political violence. It would require cracking down on paramilitary groups, tracking extremists in law enforcement, creating a healthier culture around guns and urging the Republican Party to push fringe ideas to the fringes. Every American citizen has a part to play, and the most important thing we all can do is to demand that in every community, we treat our neighbors — and their civil liberties and human rights — with respect.

One way to do that is to call out and reject the dehumanizing language that has become so pervasive in online discussions, and in real life, about particular groups of people. Calling L.G.B.T.Q. people pedophiles is an old tactic, and it makes it easier to ignore or excuse any violence that may come their way. While direct calls for violence are beyond the pale for most Republican politicians, and the causes of specific violent acts are not easily traced, calling transgender people pedophiles or “groomers” is increasingly common and usually goes unchallenged.

Marco Rubio, a Republican senator from Florida, released a TV ad recently in which he said: “The radical left will destroy America if we don’t stop them. They indoctrinate children and try to turn boys into girls.” A conservative activist group recently ran ads in several states, including one that said, “Transgenderism is killing kids.” This year, as Florida lawmakers debated the so-called Don’t Say Gay bill, a spokeswoman for Gov. Ron DeSantis of Florida posted on Twitter: “If you’re against the Anti-Grooming Bill, you are probably a groomer or at least you don’t denounce the grooming of 4-8 year old children. Silence is complicity.”

The silence from a great majority of Republicans on the demonization of, and lies about, trans people has indeed meant complicity — complicity in what experts call stochastic terrorism, in which vicious rhetoric increases the likelihood of random violence against the people who are the subject of the abusive language and threats.

Drag queen story hours aren’t the only current target for right-wing extremists. On Aug. 30, an operator at Boston Children’s Hospital, a pioneer in providing gender-affirming care, answered the telephone at about 7:45 p.m. and received a disturbing threat. “There is a bomb on the way to the hospital,” the caller said. “You better evacuate everyone, you sickos.” It was the first of seven bomb threats the hospital received over several months. The most recent came on Dec. 14.

After extremists posted online the address of a physician who works with trans children at the hospital, the doctor had to flee the home. “These have been some of the hardest months of my life,” the doctor said.

Around the country, at least 24 hospitals or medical facilities in 21 states have been harassed or threatened in the wake of right-wing media attacks, according to a tally this month by the Human Rights Campaign Foundation. To protect their employees, some hospitals are stripping information about the transgender services they provide from their websites. The messages that appear to trigger these attacks are often outlandish lies about what care these medical facilities actually provide. As a result, many hospitals feel they have no choice but to protect their staff, even if it means making the care they provide less visible. Removal of official information creates a risk that more disinformation could fill the void.

Given the transnational nature of extremism, these threats can come from anywhere. The F.B.I. arrested three people in connection with the various threats against Boston doctors. One person lived in Massachusetts, another in Texas and the third in Canada.

Data collected by the Armed Conflict Location and Event Data Project, which tracks political violence, puts the harassment of hospitals into a wider, troubling context. Acts of political violence against the entire L.G.B.T.Q. community have more than tripled since 2021; anti-L.G.B.T.Q. demonstrations have more than doubled in the same period. And the nature of the intimidation is changing: Protesters dressed as civilians have been replaced by men in body armor and fatigues; signs have been replaced by semiautomatic rifles.

Even dictionary publishers have become targets. This year, a California man was arrested for threatening to shoot up and bomb the offices of Merriam-Webster because he was angry about its definitions related to gender identity.