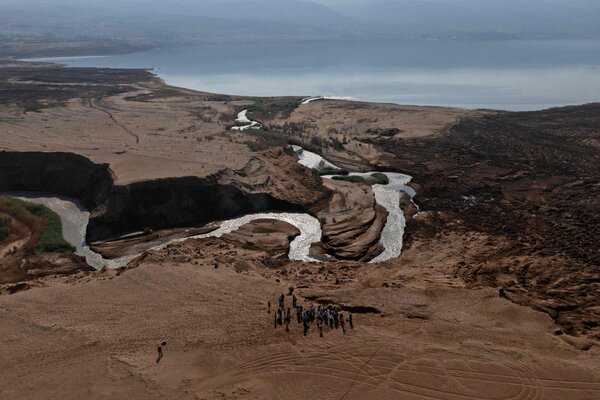 JERICHO, West Bank — There are two dramas playing out today along the banks of the River Jordan, representing the two most powerful forces shaping politics in and around Israel. Tell me which one dominates, and I’ll tell you what relations between Jews and Arabs will look like.

One is the logic of tribalism. It was starkly manifested in Israel’s newly elected ultrareligious, ultranationalist government, which was propelled into office by a surge in clashes between West Bank Palestinians and Israelis in general and a surge of criminal activity by Israeli Arabs against other Israeli Arabs and Jews in particular. It’s all driven by the tribalist motto “Me and my brother against my cousin. Me, my brother and my cousin against the outsider.”

The Israeli leader of this coalition is Benjamin Netanyahu, who won election with a campaign focused on spreading fear of, and resisting power sharing with, Palestinian residents of the West Bank and Palestinian citizens of Israel. Netanyahu’s main message was to Jewish Israelis: Only I can protect you from the other.

But while that election was unfolding, another logic was also at work: the logic of nature, which says that when the climate changes, as it is doing now, it is not the strongest or smartest species that survive. It’s the most adaptive. And the most adaptive ecosystems are usually the most diverse, rich with species offering different ways to adapt. They thrive because they’re able to forge healthy interdependencies among the different plants and animals and, in doing so, maximize their resilience and growth.

Their motto is “Me, my brother, my cousin and the outsider all collaborating naturally so we rise together, not fall together.”

An example of this kind of thinking was the tacit environmental alliance forged by Israel’s previous national unity government — led by Yair Lapid and Naftali Bennett — in collaboration with leaders from Jordan, Palestine and the United Arab Emirates.

To be sure, the previous Israeli government was dedicated to resistance thinking where needed — deterring Iranian and Palestinian attacks on Israelis. But it was also engaged in some very creative resilience thinking, based on this logic: Climate change and drought are going to kill us all long before we kill each other, unless we produce more sustainable sources of water. That has to start with nursing back to life the Jordan River that has nourished this region for millenniums.

I came here to the lowest spot on earth, where the ancient town of Jericho, the Jordan River and the Dead Sea all meet, to highlight this emerging nature-climate coalition. My tour guide was Gidon Bromberg, a co-founder of EcoPeace Middle East, a regional environmental organization consisting of Jordanians, Palestinians and Israelis striving to sustain one of the most water-stressed regions on the planet.

Bromberg began by pointing out two surprising things that are interrelated. This Jordan Valley region used to be dominated by farms growing a wide range of fruits and vegetables. Today, alas, most of the land is covered by palm trees growing dates.

Second, the bend in the Jordan River where we were standing — the spot where tradition says John the Baptist baptized Jesus — used to be roughly 100 meters wide, with rushing rapids. Today it’s only five to 10 meters wide, with no rapids, which was why we could watch Christian pilgrims comfortably standing in the middle of the Jordan being baptized by their priest.

The connection? It is now so hot down here for so much longer each year (almost 115 degrees last August) that essentially the only crop that can be reliably grown anymore is dates. But that’s possible only if the palms have a lot of water, and that is now in danger.

Without a healthy Jordan River, even date palms won’t be able to survive here. Middle East Eye recently quoted a Jordanian farmer about how haywire his planting season has become: “We used to start planting in July, but now we start in September or even October” because the summer months are too hot. “But then it gets cold very quickly” — too quickly sometimes for vegetables to survive.

How to get more water? The old method was resistance, zero-sum thinking — “everyone just grabbing water for what they thought were their legitimate security needs,” explained Bromberg. Back in the 1960s, Israel constricted the flow of the Jordan from the Sea of Galilee so it could divert more water through a national water carrier to thirsty Tel Aviv and down to the Negev to make the desert bloom. Syria choked its Jordan River tributary the Yarmouk River, and Jordan limited what was left of its portion of the Yarmouk and other tributaries feeding the river from its territory.

The once mighty Jordan turned into a freshwater trickle, which episodic droughts only exacerbated, leading to a large swath of the Dead Sea drying up. Worse, they used the Jordan as a dumping ground for human waste.

The good news is that Israel and Jordan recognized that this was self-defeating and as part of their 1994 peace accord agreed that Israel would turn the tap back on from the Sea of Galilee and give Jordan a bigger allotment of water from the river. But the Jordan River could not keep up. With the climate getting hotter and drier in the valley — and 700,000 Jordanians, 30,000 Israelis and 60,000 Palestinians trying to make a living from agriculture there — a more sustainable solution was needed.

In October 2021, I wrote about the outlines of what I hoped could become a new kind of peace treaty between Arabs and Israelis — a treaty fostering resilience among the parties rather than just ending resistance between the parties.

It was initialed by Jordan, Israel and the U.A.E. at a conference in Dubai, with the help of the U.S. climate envoy, John Kerry. Last month, at the Sharm el-Sheikh climate conference, those countries took a step further and signed a new memorandum to complete the feasibility study for this unique collaboration.

The draft deal calls for the U.A.E. to bring investment capital that would enable Jordan to build a 600-megawatt capacity solar plant in its vast desert to produce clean energy that Israel would tap to expand its coastal desalination plants (which will soon provide 90 percent of Israel’s fresh water) and pump some of that desalinated water into the Sea of Galilee and then down the expanded and properly filtered Jordan River, so it can once again be the regional water carrier that nature designed it to be.

If President Biden can help shepherd this concept to fruition, it could be the biggest U.S. contribution to Middle East peace since Camp David. An EcoPeace study argues that the rehabilitation of the Jordan River and Jordan Valley could, over time, give a multibillion-dollar boost to the combined G.D.P. of the Israeli, Palestinian and Jordanian residents there — from its current paltry $4 billion annual level.

To put it bluntly, with the old peace process now as dead as the Dead Sea, we need to hope that naked self-interest in response to natural challenges will propel massive collaboration around clean energy and water.

I like the analogy offered by Bromberg: The European Union, he noted, was forged after World War II “to harness the two most important natural resources in Europe at that time, coal and steel, to create peace and prosperity.” Indeed, when the union was founded, it was called the European Coal and Steel Community.

“What is the coal and steel of our day?” asked Bromberg. “It’s the sea, the sun and the sand.”

We need to help the parties here collaborate to forge those three into a healthy interdependency whose byproduct is not just clean water that can nourish agriculture but also trust that can be plowed back into their politics.