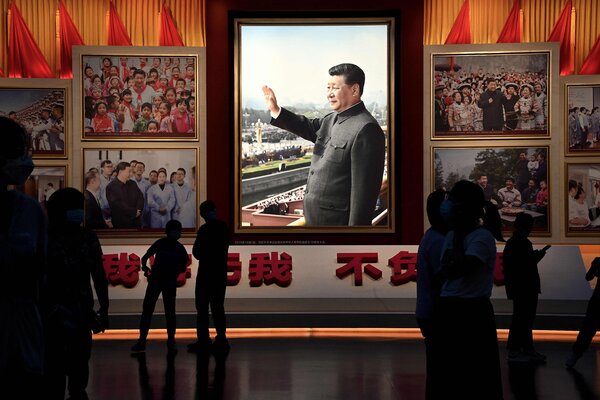 When future historians look back on 2022, they will have a lot to choose from when they ask the question: What was the most important thing that happened that year? Was it Brexit, Chexit, Ruxit or Trumpit?

Was it the meltdown of the world’s sixth-largest economy, Britain, fueled in part by its reckless 2020 exit from the European Union? Was it the demented attempt by Vladimir Putin to wipe Ukraine off the map, which has decoupled Russia from the West — what I call Ruxit — creating havoc with worldwide energy and food markets? Was it the near-total infection of the G.O.P. with Donald Trump’s Big Lie that the 2020 election was stolen — Trumpit — which is eroding our democracy’s most cherished asset: our ability to peacefully and legitimately transfer power?

Or was it China’s drive under President Xi Jinping for Chexit — an end to four decades of steady integration of China’s economy with the West, an end symbolized by the abbreviation popularized by my colleague in Beijing Keith Bradsher to describe where Western multinationals today think about putting their next factory: “A.B.C. — Anywhere But China.”

It’s a tough call. And just listing them all together only tells you what a hinge of history 2022 has become. But my vote goes to Chexit.

We’ve had four decades of U.S.-China economic integration that hugely benefited American consumers. It led to new export opportunities for some Americans and unemployment for others, depending on the industry they were in. It helped raise hundreds of millions of Chinese out of extreme poverty. It tamped down inflation and worked to prevent any great power wars.

On the whole, we will miss that era now that it’s gone, because our world will be less prosperous, less integrated and less geopolitically stable.

But gone it is.

As The New Yorker’s China expert, Evan Osnos, pointed out in October: “In 2012, 40 percent of Americans had an unfavorable view of China; today, more than 80 percent do, according to the Pew Research Center.”

If China had a democratic government, someone there right now would surely be demanding to know, “How did we lose America?”

America is not blameless in the erosion of this relationship. Since World War II, we had never had a geopolitical rival that was our near-peer both economically and militarily. We’ve never been comfortable with Beijing’s rising challenge, especially because China was not propelled by oil but by its savings, hard work and homework — i.e., a willingness to sacrifice to achieve national greatness, with a strong emphasis on education and science. That used to be us.

But much more of this is on China. To appreciate how badly China has lost America, you could start with this question to Beijing: “How is it that you had the biggest, most powerful lobby in Washington — and it didn’t cost you a penny — and yet you blew it?”

I’m referring to the U.S.-China Business Council and the United States of America-China Chamber of Commerce. These powerful business groups, representing America’s biggest multinationals, energetically lobbied for nearly four decades that more trade with China, and investment in and from China, was a win-win. So did the European Union Chamber of Commerce in China.

What happened? It was the culmination of four trends.

The first started in 2003, shortly after China was admitted into the World Trade Organization (thanks to America), when the leading advocate for market reforms in China — Prime Minister Zhu Rongji — stepped down. Zhu wanted U.S. companies to be in China because he believed that Chinese companies had to compete with the best at home to compete effectively in the world.

But Zhu was opposed by China’s many inland provinces, which were dominated by state-owned Chinese industries that had no interest or ability to compete globally the way China’s coastal provinces could. And they became increasingly influential.

When China joined the W.T.O. and won immense tariff-free or reduced-tariff access to Western markets, it promised to sign on to a W.T.O. side agreement on government procurements that would have limited China’s ability to discriminate against foreign suppliers when making huge government purchases. But China never signed it. Instead, it kept steering its tremendous state buying power to its state-owned industries — and continued subsidizing them as well.

As I explained in a 2018 column: Even when the U.S. protested to the W.T.O. — as happened when China unfairly kept U.S. credit-card companies out, then lost the arbitration case at the W.T.O. — China still slow-walked making good on a 17-year-old promise to open up to them. By then, Chinese companies, like UnionPay, so dominated China’s credit-card market that U.S. companies, like Visa, were left with crumbs. Any wonder that E.U. exports to China today are only slightly larger than those to Switzerland?

Which is why many U.S. and European companies went from looking the other way at China’s market manipulations, because they were still making money there, to complaining to their governments — but asking them not to complain to Beijing for fear of retaliation — to looking today to expand their supply chains to anywhere but China. Even Apple is now diversifying production to rely more on Vietnam and India.

“The U.S. business community loved China — there were always tensions, but there used to be a sense of opportunity and partnership. For China to turn the business community sour on China took hard work, but China did it,” Jim McGregor, who lived in China for 30 years as a business consultant and wrote three books based on his experience there, told me.

Now President Xi has done the same from his side. As Joerg Wuttke, president of the E.U. Chamber of Commerce in China, put it in an interview, Xi’s election to an unprecedented third term on a platform emphasizing Marxism and ideology over markets and pragmatism “shows me that the opening up of the Chinese economy is not going to continue. … We have to assume that China is setting itself apart from other countries and will build a counter-model to the liberal, market-oriented model of the West.”

The second trend dates back to the aftermath of Tiananmen Square in 1989, when the Chinese Communist Party leadership sought to dampen the democratic aspirations of China’s youth with a fire hose of hyper-nationalism. My colleague in Beijing Vivian Wang recently interviewed the political writer Wang Xiaodong, long considered the standard-bearer of Chinese nationalism, who once said that “China’s forward march is unstoppable.” However, Wang Xiaodong told The Times that under Xi, the Chinese nationalism movement, spurred on by other influencers on social media, had gone too far: “I’ve been called nationalism’s godfather. I created them. But I never told them to be this crazy.”

I got a taste of this in 2018 when I was in China talking with business and government figures. When I raised China’s unfair trade practices, the pushback sounded like this: “You realize that you Americans are too late? We’re too big to be pushed around anymore. You should have done this a decade ago.” I responded that that kind of hubris gets countries in trouble.

Which leads to a third trend: a much more aggressive Chinese foreign policy that is trying to assert dominance across the whole South China Sea, frightening China’s key neighbors, Japan, Korea, Vietnam, India and Taiwan.

But the last trend may be the most off-putting: Instead of importing effective Western-made vaccines to keep the pandemic at bay, China is relying on a “zero Covid” policy that uses lockdowns of whole cities as well as all the new tools of a surveillance state: drones, facial recognition, ubiquitous closed-circuit television cameras, cellphone tracking and even tracking of restaurant patrons, who must present a QR code to be scanned and recorded.

It feels like a Xi strategy for preventing both Covid and freedom from breaking out.

What Xi fails to grasp is that all of the most advanced technologies of the 21st century — like semiconductors and mRNA vaccines — require big, complex global supply chains, because no country can be the best at each one of their increasingly sophisticated components. But such supply chains require a huge amount of collaboration and trust among partners, and that is exactly what Xi has squandered in the last decade.

But also color me worried. I confess, I don’t like to use the term “China.” I much prefer “one-sixth of humanity who speak Chinese.” It captures the true scale of what we are dealing with. I want to see the Chinese people thrive; it’s good for the world. But they’re going down the wrong track today. And when one-sixth of humanity makes a wrong turn in our still very connected world — China, for instance, still holds almost $1 trillion of U.S. Treasury debt — everyone will feel their pain.