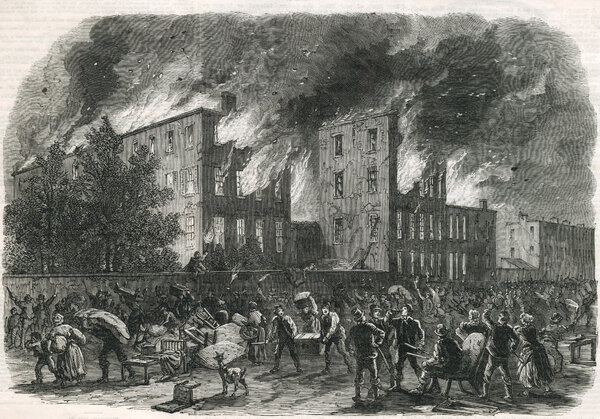 New York City was the site of one of the deadliest riots in United States history 160 years ago this year.

New York then was hardly the monolithic liberal bastion it has since become. Its economy benefited significantly from the slave economy and the cotton it produced. And, although the state’s abolition of slavery became effective in 1827, during the following decades, as the historian Sylviane A. Diouf has noted, the city came to dominate the illegal slave trade to the American South, Brazil and Cuba.

Indeed, the mayor at the time, Fernando Wood, was a pro-Southern, pro-slavery Democrat, who proposed that the city secede from the Union in 1861 after South Carolina became the first state to do so the year before.

Conservative, antiwar Democrats, known as Copperheads, were enraged by the onset of the Civil War, and they were vocal opponents of Abraham Lincoln’s war policies. They saw abolitionists as agitators and their call to end slavery as an affront to states’ rights. Many Copperheads thought the secession was constitutional and the war misguided because, as the historian Jennifer L. Weber explains in The Journal of the Abraham Lincoln Association, “the Constitution (they rightly pointed out) says nothing about the terms of membership in the Union.”

So the Copperheads and their presses began relentless racist campaigns that inflamed the passions of poor and working-class whites. They offered a kind of “great replacement” theory of its time, claiming that once freed, Black throngs would invade New York City and create competition for whites’ jobs and threaten their way of life.

When Lincoln issued his preliminary Emancipation Proclamation in 1862, it served to cement the replacement paranoia. The editor of a Copperhead newspaper on Long Island wrote at the time that “in the name of freedom for Negroes” the proclamation “imperils the liberty of white men.”

Then, when the Enrollment Act of 1863 passed, establishing the first national draft, tensions boiled over into a bloody five-day riot. More than 100 people died, although some believe there may have been an undercount of hundreds. The riots were anti-government because the government was forcing people to participate in a war to which they were vehemently opposed. They were anti-Black because racist phobias had been drummed into them. And they were anti-elite because another point of tension was that wealthy people could buy exemption from conscription by paying a $300 fee, an amount far out of reach of most working-class men.

Working-class white people had been radicalized by white supremacy, racial tribalism, the fear of new arrivals and anti-government fervor.

A lot has changed since 1863, but devices of division and provocation remain, a means of dividing the white from the nonwhite working class by stoking a combination of grievance against outsiders and against the government and wealthy elites seen to be favoring their interests over those of “ordinary” (i.e., white) citizens.

For much of American history, the holy grail of liberal politics and activism has been to find a way past such divisions, a way to make poor and working-class people of all races see that their fates and interests are linked.

But race, then as now, remains a powerful tool for driving a wedge in the working class. This is not to say that a coalition can’t be built, or has never been built. In the New Deal realignment of the 1930s, Democrats built a coalition that supported the working class, to at least some extent, regardless of race. It wasn’t perfect, of course, because it still accommodated racist Democrats in the South, but it was a coalition.

That coalition began to fall apart in the 1960s with the successes of the civil rights movement. Since that time, Black leaders have been struggling to reshape the coalition, from Martin Luther King Jr.’s Poor People’s Campaign of the late 1960s, to Jesse Jackson’s National Rainbow Coalition, founded in the 1980s, to the Rev. William Barber’s focus on “fusion coalitions” that came out of his Moral Mondays campaign started in 2013 to protest North Carolina’s hard-right legislative turn.

Liberal politicians have developed another method at coalition-building, one that sometimes works: a cultural bilingualism that tries to speak to the white working class and educated liberals separately, on their own terms and in their own languages.

But as the forces of intellectualism and what we’ve come to call “diversity” exert increasing power in the Democratic Party, non-college-educated white voters have fled. As Nate Cohn pointed out in this paper in 2021, after Joe Biden’s victory: “When the Harvard-educated John F. Kennedy narrowly won the presidency in 1960, he won white voters without a degree but lost white college graduates by a two-to-one margin. The numbers were almost exactly reversed for Mr. Biden, who lost white voters without a degree by a two-to-one margin while winning white college graduates.”

Similarly, according to a Politico analysis, in 2020 Donald Trump won an astonishing 96 percent of those districts in which 70 percent or more of people were white and fewer than 30 percent were college-educated.

This partisan bifurcation of the white vote is being called the “diploma divide,” but it’s more than that. It also frequently represents a basic knowledge gap, which encourages a hostility to truth, which softens the ground for conspiracy peddling, hate-mongering, extremist radicalization and episodes of terrorism.

Yes, 1863 is in the distant past. But themes from that era are percolating at the edges — and sometimes not only the edges — of conservative discourse: The growing expression and occasional endorsement of “great replacement” theory. The calls, still marginal yet increasing, for secession or civil war. The fear of the Other, whether in the form of a liberated slave or a southern border crosser. The routine debasement and growing mistrust of government, and in particular its efforts to improve racial equality.

There aren’t anti-Black race riots brewing in New York City. But a familiar, vintage anger and unease is growing, and it’s deeply worrisome.