The stonemason sent word from the west of Ireland that he could do the job, but it would be tight. The face of the old Minogue family gravestone, topped by a Celtic cross and the color of a sullen sky, had only so much room.

The headstone rises to meet you at the gate of a countryside cemetery in Shanaglish, County Galway. In the now-distant summer before the pandemic, I came to pay my respects, as I always do when back, only this time I looked more closely at the weathered front.

Was there space enough? And what are the words?

The graveyard sits at the edge of a quiet parish anchored by little more than a Catholic church and Whelan’s pub. But linger among these tombstones, and the roar of life swells, the imagination rushing to fill the yawning space between chiseled years.

I suppose I heard what Mairtin O Cadhain conjured in his modern Irish classic “The Dirty Dust,” in which those buried in a remote cemetery do not allow the mere cessation of breath to end the disputes and longings of life. Beneath the Connemara clay, the grudges hold their grip; the unrequited loves remain ever so.

Here in the Shanaglish cemetery, an invitation that reads more like a command is planted at the foot of several graves: “Kneel and Pray.” I chose instead to listen to the sounds: the festive hums of long-ago baptisms and weddings, the quarreling cacophony over land and livestock, the halting endearments among those laid side by side.

I listened for the songs of individuals, as much as could be heard from scant information committed to stone. A name, a couple of dates, a snatch of prayer, a brief encomium.

Here was a marker topped with the engraved image of crossed hurleys — the wooden sticks used in the thrilling Irish game of hurling — in honor of a man “Who Helped GALWAY Win Their First Hurling ALL-IRELAND 1923.”

Here was a family grave with a reference at the bottom to someone with an entirely different surname. All it says is, “Also Larry Fogerty.”

That single “also” seemed so wonderfully inclusive. You can see the man — a bachelor farmer, perhaps, with no immediate relations — invited into the family’s home for an eternal cup of tea and an ever-replenishing supply of McVitie’s biscuits.

Here, a Celtic cross made of wood. Here, graves bearing last names not traditionally Irish: those of Brazilians who came years ago to work in meat-processing plants in the nearby large town of Gort. 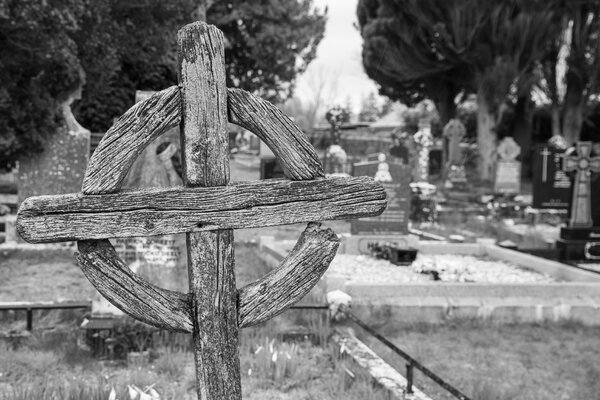 And here, rising above all others, a monument for the Loughnanes: Patrick, 29, and Harry, 22. In 1920 the brothers — both active in the Irish rebellion for independence — were arrested by British forces while threshing corn. They were tortured and dragged for miles from the back of a truck, after which, it is said, someone’s dream led to the discovery of their mutilated bodies in a murky pond.

Bordered by a low metal fence, the large Loughnane plot centers the cemetery in that place of faith where religion and nationalism meet. It is both a grave for brothers and a shrine to martyrs.

Facing the Loughnanes from a few yards’ distance is the Minogue grave site. The headstone indicates that these Minogues were from the nearby spot of a place called Gortmugga.

Mary, my aunt and godmother:

Nothing is shared beyond the data of death. Still, the few figures etched on old cemetery headstones are like cryptographs, offering clues to visitors trying to crack the mystical code of how lives were lived.

First, Minogue is not a traditional Galway surname, but it is quite common in County Clare, especially the Scariff area, about 20 miles to the southeast. An arranged marriage, perhaps? Perhaps.

The reference to Gortmugga indicates that the Minogues lived on a modest farm with no electricity or plumbing. The ages of the parents signal that they endured Ireland’s fight for independence and subsequent civil war. (For a while, it is said, Daniel was on the run from the British.)

And a quick calculation adds up to profound loss. The daughter, Mary, was 13 when the mother died; the son, Joe, was 5 — and only 12 when the father died.

Both left Gortmugga. Mary emigrated to the States and died young, of cancer; the family never again heard from her American husband. Coming of age in the midst of a stagnant Irish economy, Joe joined so many others in seeking manual labor in England. After decades in construction, he retired to Longford, his wife’s native county, where he is buried.

Another daughter, my aunt Chrissie, is with her husband, Sonny Nestor, in a plot a few steps away. My cousins keep the grave well tended.

But the Minogues of Gortmugga had a fourth child, Nora.

She was 9 when her mother died, and 15 when her terminally ill father sent her in 1953 to live with an aunt in Brooklyn, where she began her American life as a glorified scullery maid. Within a dozen years, Nora Minogue was Noreen Barry, living with her husband and four children, including me, in a split-level home on Long Island.

For all the kitchen table dreaming, she returned only twice to Ireland, including for her father’s funeral. Yet she never became an American citizen.

My mother has been buried for 22 years in Calverton National Cemetery, a never-ending Long Island necropolis more than a thousand times the size of the Shanaglish graveyard. To visit her burial plot — shared now with my father, a veteran — you need a map from the front office to navigate the bone-white sea of markers to reach Section 19, Grave 1023.

I have visited twice.

Standing now among the yew trees of the Shanaglish cemetery, I resolved at least to inquire. A cousin put me in touch with an accommodating stonemason in Athenry, who emphasized the need for brevity. Together we winnowed the cryptographic language.

A few weeks later, he sent me a photograph of his handiwork. Now, near the lichen-mottled bottom of the Minogue family headstone, a single new line appears in the slate gray:

I can’t quite explain why I felt the need to add to the sacred text of an old Irish graveyard. Perhaps it had to do with wanting to return my mother to the ongoing conversation of her homeplace.

Maybe now, visitors will pause to imagine this life bracketed by two dates. That of Nora, who, before being sent off to America, prayed what children pray in the Shanaglish church, vexed the nuns at the school in Gort, wandered in the apple orchards, listened to the ghost stories, rode her bicycle, went to dances, was a girl, once, of midcentury Ireland.

Dan Barry (@DanBarryNYT), is a domestic correspondent for The Times and the author, most recently, of “This Land: America, Lost and Found.”

Karen Cox is an award-winning freelance photographer based in Ireland.