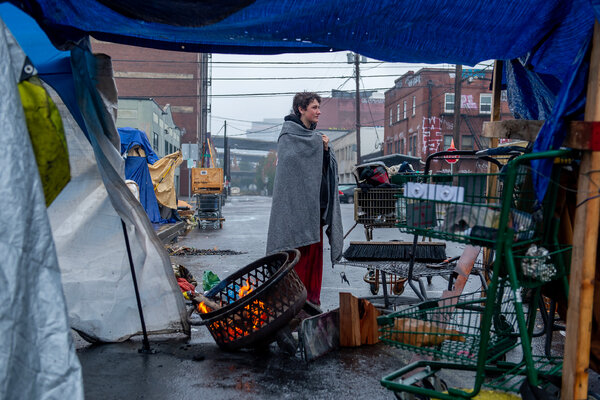 PORTLAND, Ore. — An ad for one of the candidates for governor of Oregon begins with shots of trash and the tarp-covered tent encampments that line many of Portland’s streets. “Nobody in Oregon would say, ‘Let’s keep doing exactly what we’ve been doing,’” says the candidate. She continues, “I called for a homelessness state of emergency nearly three years ago, while Kate Brown” — the current Democratic governor — “did nothing.”

It’s not a surprising message in a campaign in which homelessness and crime are central issues. What’s surprising is the messenger: Tina Kotek, the former Democratic speaker of the Oregon House, running to succeed Brown.

Kotek’s ad is a sign of the indefensibility of the status quo in one of the country’s most progressive cities, and of the unexpected political peril Oregon Democrats face as a result. Most polls show that her opponent, Christine Drazan, the former Republican minority leader in Oregon’s House, has a slight lead in the race. If Drazan wins, it will be a sign that no place is immune to the right’s message on public disorder, whose resonance is also making Gov. Kathy Hochul’s race for re-election in New York uncomfortably close.

A Republican hasn’t won the Oregon governor’s race in 40 years. And while progressive states electing G.O.P. governors is nothing new, Drazan — like New York’s Republican gubernatorial nominee, Lee Zeldin — is far more conservative than the Rockefeller-style Republicans who lead Massachusetts and Vermont. She has an A rating from the N.R.A. and an endorsement from Oregon Right to Life, meaning that just months after the end of Roe v. Wade, Oregon could end up with an abortion opponent in charge.

Some Oregon Democrats argue that Drazan’s competitiveness is a fluke, a product of the well-funded spoiler campaign being run by Betsy Johnson, a centrist ex-Democrat who has received $3.75 million from the Nike co-founder Phil Knight. But that doesn’t explain why so many Democrats are willing to defect to Johnson in the first place. (FiveThirtyEight’s polling average has her getting 13.8 percent of the vote.) Nor does it explain why Democrats are struggling in congressional districts neighboring Portland. The Cook Political Report rates Oregon’s Sixth District, which went for Joe Biden by 13 points, a tossup, even though the Republican nominee is, like Georgia’s Herschel Walker, an abortion opponent who reportedly paid for the abortion of a woman he dated.

“Four of our six House seats could end up in red territory,” Senator Jeff Merkley told me after a rally here with Kotek and Bernie Sanders. The fact that Sanders was in Oregon in the first place — Biden and Elizabeth Warren have also come through — is a sign of how shaky things are for Democrats in the formerly safely blue state.

Part of the story here is about the national political environment, but it’s also about the catastrophe of homelessness in Portland, which, as in other West Coast cities, looks very different than on the East Coast. New York has a higher rate of homelessness than Oregon, but a larger percentage of people sleeping in shelters than on the streets. By contrast, in Multnomah County, which includes much of Portland, most people experiencing homelessness sleep either in tents or vehicles. The tents line streets and fill parking lots; they are a constant reminder that we’re living through a time of widespread social collapse.

There is no reason to believe that Drazan has a viable plan to fix a hellishly complex problem. Most of her proposals, aside from repealing Measure 110, the drug decriminalization ballot initiative Portland passed in 2020, are vague. But the manifest failure of Democrats to make things better has created a runway for her and others like her. “Instead of enabling homelessness, we must balance our approach with a mind set of both compassion and accountability,” Drazan told Oregon Public Broadcasting. It’s not surprising that this message is resonating.

Kotek is thus in a tricky position: She has to convince voters that the crisis in Portland represents a technocratic rather than an ideological failure by Brown. “The two biggest issues right now are housing and homelessness, and mental health and addiction,” Kotek told me. “And I’ll be honest, she’s been absent on that topic. It’s not been a priority for her. And when you don’t make something a priority, agencies kind of flounder, money doesn’t move fast enough.”

This might sound like a deflection, but administrative sclerosis has clearly contributed to Portland’s problems. Scott Kerman, executive director of Blanchet House, an organization that provides food, shelter and medical care to poor and homeless people in Portland’s Old Town neighborhood, scoffs at the idea that widespread street homelessness is “something that liberal hippie Portland has done to itself.” Certainly, street homelessness has always been a problem in Portland. But Kerman blames a confluence of disasters, including steeply rising housing costs, a lack of services to help addicts (one survey ranked Oregon last in the nation for access to drug treatment) and — perhaps most significantly — the pandemic for turning parts of downtown into what he called an “open-air psych ward.”

“What we’re dealing with now,” said Kerman, is the byproduct of “inattention and inaction that occurred in the first six months to a year of the Covid crisis.”

When the pandemic hit, Kerman said, many shelters and other services in the city closed. Blanchet House, which offers three free meals a day to anyone who wants them, stayed open, providing food to go. “And we very quickly went from 1,000 meals a day to 2,000 meals a day, because most locations around the city had shut down, especially on the East Side,” he said. “So everybody migrated here to Old Town. And for a good six months, it was deplorable. Outside, it reminded me of news footage of Sudanese refugee camps.”

As Kerman points out, people without housing still have routines — they may spend their days in libraries, or social service organizations, or Starbucks. Suddenly, they had to be outside all the time. He described bureaucratic hurdles that made it impossible to get portable toilets and hand-washing stations, leading to “dehumanizing, almost ‘Mad Max’-like conditions.”

The trauma of such conditions accelerated people’s mental illnesses. Many sought relief in hard drugs. There’s a perception that people end up homeless because they’re addicts, but Kerman says that for many of those Blanchet House serves, it’s the other way around. “We’ve had sort of a vacuum of services, and what has filled that vacuum has been crime and violence and drug and sex trafficking,” he said.

It’s likely that no leader could have entirely staved off this calamity, but Brown’s hands-off approach seems to have made it worse. Take, for instance, Measure 110, the drug decriminalization initiative. One reason Kotek argues against repealing it is that it funds $300 million in drug and alcohol treatment, including housing services, every two years. But bureaucratic delays meant that most of the funding didn’t go out until late September, and Kotek said service providers aren’t getting clarity from the state about whether they can count on funding in the future. “If you’re trying to hire up, you need certainty,” she said. “And the lack of operationalizing this from the state agency has been deplorable.”

There are reasons to think that Kotek, who has a reputation as an indefatigable legislator, can do better. In an otherwise tentative endorsement, The Oregonian singled out the specificity of her housing plan, and her ability to execute it: “Her exacting standards bode well for oversight of state agencies that have failed repeatedly and inexcusably under Gov. Kate Brown.”

The question is whether frustrated voters will be satisfied with the promise of better management rather than radical change. “We certainly don’t need a red state takeover to clean up the damn trash,” Kotek says in her ad. Let’s hope not.