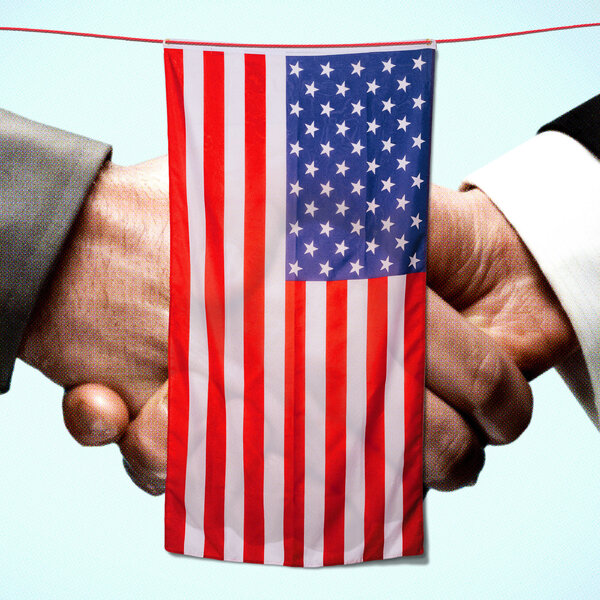 In the early 20th century the British author Norman Angell published a famous book titled “The Great Illusion,” which declared that economic progress and growing world trade had made war obsolete. Nations, he argued, could no longer enrich themselves through conquest: Industrial workers couldn’t be exploited like peasants, and even small nations could prosper by importing raw materials and selling their wares on world markets. Furthermore, war between economically interdependent nations would be immensely costly even to the victors.

Angell wasn’t predicting the immediate end of war, which was good for his credibility, since the carnage of World War I was just around the corner. He was, however, hoping to persuade politicians to abandon their dreams of military glory. And an implication of his logic was that closer economic links among nations might promote peace.

Indeed, the idea of peace through trade was to become a cornerstone of Western statecraft in the aftermath of World War II.

In my most recent column, I talked about the General Agreement on Tariffs and Trade, which has governed world trade since 1948. This trading system owes its origins in large part to Cordell Hull, Franklin Roosevelt’s secretary of state, who saw world trade as a force for peace as well as prosperity. The road to the European Union began with the creation of the Coal and Steel Community, one of the goals of which was to create so much interdependence between France and Germany that a future European war would be impossible.

But now, as I wrote in the column, the United States, which largely created the world trading system, is imposing new restrictions on trade in the name of national security and bluntly asserting that it has the right to do so whenever it chooses. When the Trump administration did this, it could be dismissed as an aberration: Donald Trump and those around him were crude mercantilists with no sense of the historical reasons behind existing trade rules. But you can’t say that about Biden officials, who understand both the economics and the history.

So is this the end of peace through trade? Not exactly — but it’s a doctrine that has lost a lot of force lately, for several reasons.

First, the idea that trade fosters peace may be true only for democracies. The United States briefly invaded Mexico in 1916 in an unsuccessful attempt to capture Pancho Villa; such a thing would be hard to conceive nowadays, with Mexican factories such integral parts of the North American manufacturing system. But are we equally sure that the similarly deep integration of Taiwan into China’s manufacturing system rules out any possibility of invasion?

What about the idea that growing integration with the world economy would itself be a force for democratization? That idea was a key pillar of economic diplomacy in some Western nations, notably Germany, which bet heavily on the doctrine of Wandel durch Handel — transformation through trade. But even a glance at Vladimir Putin’s Russia or Xi Jinping’s China shows that this doctrine has failed: China began opening up to international trade more than 40 years ago, Russia 30 years ago, but neither shows any signs of becoming a democracy or even a nation with strong rule of law.

In fact, international interdependence may have made the ongoing war in Ukraine more likely. It’s not obviously silly to suggest that Putin expected Europe to accept the conquest of Kyiv because of its dependence on Russian natural gas.

Again, I’m not suggesting that the idea of peace through trade is completely wrong. War in the heart of Europe (although, unfortunately, not on its periphery) has become hard to imagine thanks to economic integration; wars to secure access to raw materials seem far less likely than they once were. But the dream of a “commercial peace” has definitely lost much of its force.

That matters a lot. We live in a world of very open markets, but that didn’t have to happen, and it doesn’t have to persist. We didn’t get here because of inexorable economic logic: Globalization can and has gone into retreat for extended periods when it loses policy support. Nor did we get here because economists persuaded politicians that free trade is good. Instead, the current world order largely reflects strategic considerations: Leaders, especially in the United States, believed that more or less free trade would make the world more amenable to our political values and safer for us as a nation.

But now even relatively internationalist policymakers, like officials in the Biden administration, aren’t sure about that. This is a very big change.

The slave trade and the Industrial Revolution.