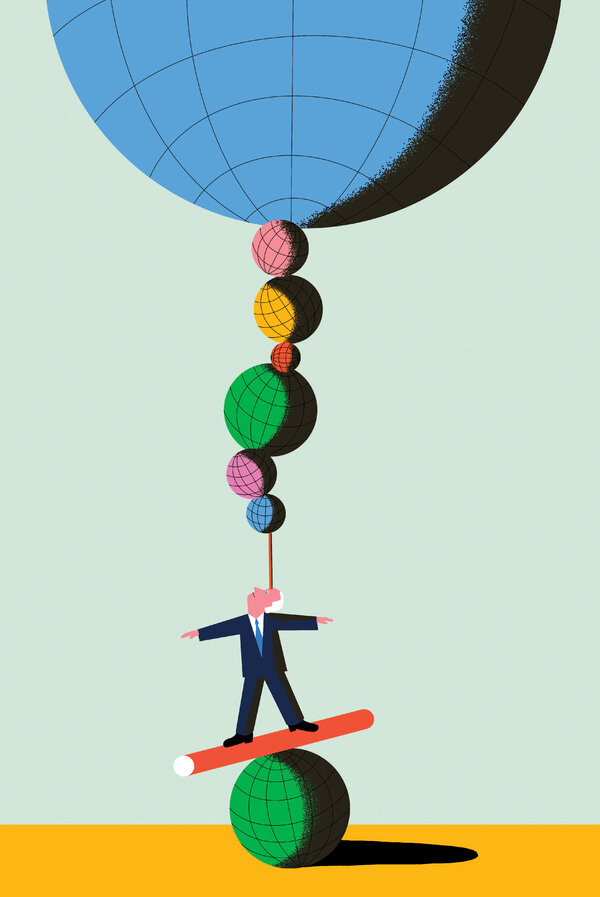 Ms. Slaughter is C.E.O. of New America, a think tank and civic enterprise.

A year after President Biden’s election, we’re beginning to see the contours of his foreign policy: He has something for everyone. For balance-of-power realists, he has countered China by working much more closely with “the Quad” — India, Australia, Japan and the United States — and creating a new British, Australian, U.S. nexus with the AUKUS submarine deal, no matter how clumsily handled.

For liberal internationalists, he has re-engaged with global institutions: rejoining the World Health Organization and the U.N.-sponsored Paris Agreement to limit climate change and recommitting to NATO. For those advocating “restraint” in America’s military might, he has ended at least the visible “forever wars.”

And for democracy and human rights activists committed to a values-based foreign policy, Mr. Biden will be hosting a Summit for Democracy next month. The administration has also ratcheted up both its rhetoric and its actions on human rights issues, accusing China of both genocide and crimes against humanity for its treatment of its Uyghur population and authorizing sanctions against several officials responsible for the war and humanitarian crisis in Ethiopia.

Yet when everyone gets something, no one gets everything, which is why the core principles of Mr. Biden’s worldview have been hard to pin down.

Not for lack of trying, however. Richard Haass, president of the Council on Foreign Relations, argues that Mr. Biden is continuing many of Donald Trump’s “America First” policies in a different guise. Joshua Shifrinson, a Boston University professor, and Stephen Wertheim, senior fellow at the Carnegie Endowment for International Peace, claim that the Biden Doctrine is “pragmatic realism,” pursuing U.S. interests “in a competitive world” and changing course as necessary to achieve them.

On the values-based side of the foreign policy ledger, a growing number of observers insist that the real Biden Doctrine is to preserve and prove “the supremacy of democracy” worldwide. As Jonathan Tepperman, former editor in chief of Foreign Policy, argues, the “global contest between democracies and autocracies” provides an “organizing principle” to link investing in infrastructure and industrial policy at home, pursuing a foreign policy for the middle class and working to build coalitions of democracies abroad.

Perhaps Mr. Biden is perfectly comfortable with multiple “Biden Doctrines.” He might say that reconciling conflicting impulses and brokering compromises is his trademark as a politician who knows how to get things done.

The problem is that swinging from one framework and set of goals to another without a set of clear principles and priorities risks falling radically short of the progress that the world needs on existential issues. What difference does it make whether the United States “beats China” if our cities are underwater, the Gulf Stream stops warming northern Europe and the United States, and hundreds of millions of climate refugees are on the move? If we destroy the biodiversity on the planet? If millions more people die from serial pandemics? If people the world over do not have the means to flourish and care for one another?

It is time to break free of 20th-century thinking. Two decades of Mr. Biden’s 50-odd years in public life were spent during the Cold War and a third during the 1990s with the United States as a hyperpower. For most of this period great-power competition and making the world safe for democracy were fused. “People” issues were relegated to human rights advocates and development experts. Diplomacy and defense were the provinces of nations and the field of international relations.

The frameworks, paradigms and doctrines of that era, of any kind, are simply insufficient to meet the challenges of the 21st century. Bolder thinking is required, thinking that shifts away from states, whether great powers or lesser powers, democracies or autocracies. It is time to put people first, to see the world first as a planet of eight billion people rather than as an artificially constructed system of 195 countries and to measure all state actions in terms of their impact on people. Instead of competing with China today on one issue and cooperating tomorrow on another, Mr. Biden must prioritize cooperation on global issues and challenge other nations, regardless of whether they are democracies, autocracies or something in between, to join in.

This approach is known as globalism, which has a bad name because of its association with globalization. But globalism is actually closer to localism, to beginning with people, where they live and what they need, regardless of what colored square on the map they happen to be born in. It is a people-centered rather than a state-centered approach to problem-solving on a global scale. It does not pretend that governments don’t exist or don’t matter, but rejects the idea that interstate rivalry matters as an end in itself — the essence of geopolitics.