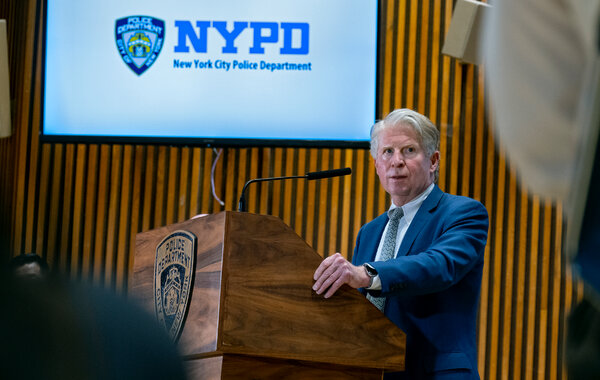 Re “Prostitution Will No Longer Be Prosecuted in Manhattan” (news article, April 22):

The change in policy does not go far enough. Those who sell sexual services will no longer be prosecuted, but their clients will remain subject to arrest and prosecution. This lopsided policy has been a failure in countries that have adopted it, such as Canada, France and Sweden.

Criminalizing only one of the parties involved in consensual transactions indirectly harms the other party, as they are forced to operate in a clandestine and potentially precarious manner. Imagine a law that decriminalized those who sell marijuana but criminalized those who buy it! Comprehensive legalization is a superior alternative.

Ronald Weitzer
Aptos, Calif.
The writer is the author of “Legalizing Prostitution: From Illicit Vice to Lawful Business.”

We celebrate the policy of the Manhattan district attorney, Cyrus Vance Jr., of supporting survivors and declining to prosecute those bought in the sex trade. But to be clear, Mr. Vance’s policy is fundamentally different from the position being championed by some Manhattan district attorney candidates in support of full decriminalization, which would legitimize the sex trade and make brothel owning, pimping and sex tourism legal.

Those sold in prostitution, mainly marginalized women and girls of color and L.G.B.T.Q.+ youth, should receive services, not criminal penalties. But their sex buyers, many of whom are white men with privilege, must be held accountable for the violence and devastating harm they cause. Handing out a free pass to the privileged to purchase our most marginalized is a far cry from progressive policy.

Lauren Hersh
New York
The writer is national director of World Without Exploitation.

How to Do Better Fighting Drug Addiction

Shawn McCreesh’s heartbreaking personal experiences with friends and loved ones struggling with opioids is all too familiar to countless families. With the most recent estimates of drug overdose deaths reaching nearly 90,000 in the past year alone, it’s understandable for families already stretched to their limits by the pandemic to feel lost and alone.

Despite significant strides in recent years in how our country thinks about and addresses addiction, there’s so much more to be done to eliminate the stigma, improve prevention and make effective treatments available and accessible to all who need them.

Substance use and addiction affect the whole family. The chance of preventing use among children and promoting a successful recovery among those with addiction is significantly higher if families are armed with the skills and resources they need to offer effective support.

That’s why our focus at Partnership to End Addiction is on families: helping parents of children of all ages prevent substance use and support the treatment and recovery of loved ones with a substance use disorder.

Shawn McCreesh paints a tragic picture of the impact of opioid addiction. I certainly felt a great deal of empathy for the parents and friends of those who have died as a result of this tragedy. But if, in the 1980s and 1990s, when drug addiction was the scourge of Black neighborhoods, we, as a country, had decided to respond to the crisis then as a public health issue rather than as an opportunity to criminalize the victims, things might be different today.

Instead of using millions of dollars to lock up an obscene number of people, we might have used those funds to build a health care infrastructure, one that might have resulted in enough beds available today for the victims of this new scourge.

‘The Pandemic Has Seriously Raised My Standards for Cleanliness’

Re “A Window Into a Changed America” (Times Insider, April 18):

Since the pandemic, places are cleaner. Restaurant tables and chairs are wiped between guests with sanitizers, not dirty wet rags. My hotel room door was sealed, assuring me that the whole room — not just the toilet — was disinfected. My building laundry room was always clean, but now it sparkles. Likewise, my nail and hair salons are immaculate.

Although I never worried much about germs, now I wonder why this level of cleanliness doesn’t continue. Why should I expect less from places at which I pay to eat, sleep, launder and get pampered?

The pandemic has seriously raised my standards for cleanliness.

Protests in Pakistan: The Government’s View

The government of Pakistan has not yielded to the demands by street protesters or radical groups to expel the French ambassador. The government has restored public order through appropriate law enforcement measures. Moreover, Tehreek-e-Labaik Pakistan has been proscribed under the Anti-Terrorism Act, and those involved in violence have been arrested.

Like all civilized and democratic societies, the government has agreed to discuss the matter in Parliament and resolve it in line with the wishes of the Pakistani people. This shows the government’s firmness and resolve, not weakness.

Unconditional love and reverence of the Holy Prophet is an integral part of the Islamic faith. Any effort to ridicule or denigrate the prophet causes understandable outrage among Muslims. It also provides an opportunity to fringe groups to exploit the sentiments of the public.

Governments should take appropriate measures to respect other religions and not allow anyone to hurt the religious sentiments of others in the name of freedom of speech.

Maliha Shahid
Washington
The writer is spokeswoman for the Pakistani Embassy.