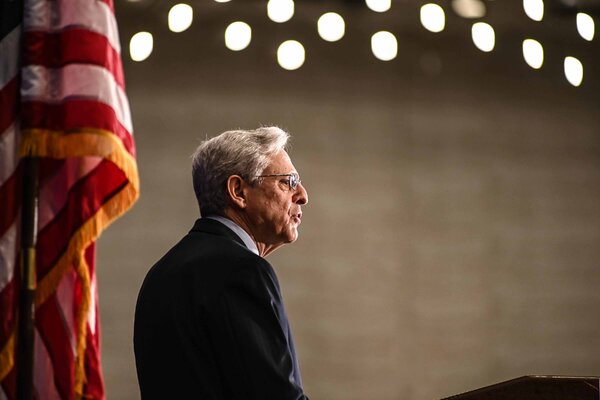 Mr. Weissmann was a senior prosecutor in the special counsel investigation into Russian interference in the 2016 election.

The tenacious work of the Jan. 6 committee has transformed how we think about the Jan. 6 rebellion. It should also transform the Justice Department’s investigation into efforts to overturn the 2020 election.

Before the hearings, federal agents and prosecutors were performing a classic “bottom up” criminal investigation of the Jan. 6 rioters, which means prosecuting the lowest-ranking members of a conspiracy, flipping people as it proceeds and following the evidence as high as it goes. It was what I did at the Justice Department for investigations of the Genovese and Colombo crime families, Enron and Volkswagen as well as for my part in the investigation of Russia’s interference in the 2016 election led by the special counsel Robert Mueller.

But that is actually the wrong approach for investigating the Jan. 6 insurrection. That approach sees the attack on the Capitol as a single event — an isolated riot, separate from other efforts by Donald Trump and his allies to overturn the election.

The hearings should inspire the Justice Department to rethink its approach: A myopic focus on the Jan. 6 riot is not the way to proceed if you are trying to follow the facts where they lead and to hold people “at any level” criminally accountable, as Attorney General Merrick Garland promised.

The evidence gathered in the hearings describes a multiprong conspiracy — what prosecutors term a “hub and spoke” conspiracy — in which the Ellipse speech by President Trump and the Jan. 6 attack on the Capitol were just one spoke of a grander scheme.

This broader approach would avoid the thorny debate that has emerged as to whether Mr. Trump could be criminally culpable for inciting the riot during his Ellipse speech, or if, on the contrary, his speech is protected under the First Amendment and the evidence too ambiguous to justify the extraordinary step of indicting a former president. Building a criminal case that looks solely at the riot itself is far more complex legally and factually for those who weren’t at or in the Capitol. These challenges of the current bottom-up approach have led to criticism of the slow pace of the narrow Justice Department approach.

Instead, what the hearings have revealed is evidence of a plot orchestrated by Mr. Trump and his allies in the White House and elsewhere — including players from the Mueller investigation like Roger Stone, Michael Flynn and Rudy Giuliani as well as new players like Jeffrey Clark and John Eastman. The “spoke” of the Jan. 6 riot should be seen and investigated simultaneously with the other “spokes”: orchestrating fake electors in key states, pressuring state officials like those in Georgia to find new votes, plotting to behead the leadership of the Justice Department to promote a lackey who would further the conspiracy by announcing a spurious investigation into election fraud, and pressuring Vice President Mike Pence to violate the law.

Investigating the Jan. 6 insurrection in the context of the other means by which Mr. Trump appears to have sought to undermine the transfer of power serves to strengthen any future case by presenting the complete evidence of the perpetrators’ actions and intent. And it undermines possible defenses.

For instance, the evidence that Mr. Trump lied in a statement about Mr. Pence’s agreeing that he had the power to reject electors undermines the defense that Mr. Trump was acting in good faith and honestly believed he had won the election. And Mr. Trump’s conduct in the White House after his speech at the Ellipse and during the Jan. 6 attack, which includes remarks, reported from testimony by the former White House aide Cassidy Hutchinson, in which Mr. Trump condoned the chants calling for hanging of the vice president of the United States, is strong evidence of his intent for a plan to upend a democratic election.

There are signs that the department, spurred on by the committee, has begun to look into some of these other spokes. Unsurprisingly, the spoke involving the Justice Department itself has attracted acute interest. Recently, federal agents conducted a search of the home of Mr. Clark, whom Mr. Trump considered elevating to be acting head the Justice Department, and seized the phone of Mr. Eastman, a lawyer who advised Mr. Trump on efforts to overturn the election.

But other signs are not so encouraging: Department prosecutors were reportedly surprised by the testimony of Ms. Hutchinson. That is not a sign of a robust investigation into the facts. The department has more tools than Congress does to learn the truth. It could have interviewed Ms. Hutchinson long ago, as well as many others whose evidence is relevant — indeed, Ms. Hutchinson alone provided investigators numerous leads to pursue.

For those who do not voluntarily cooperate with a Justice Department investigation, prosecutors can serve grand jury subpoenas and obtain their testimony under oath, subject to criminal penalties like perjury — just as Georgia state prosecutors are doing. And people can be given immunity to compel their testimony if they validly assert the Fifth Amendment. Obtaining grand-jury testimony is indispensable; it forestalls witnesses from credibly claiming later that they had not made certain statements in an interview or that an interview report is inaccurate (or worse).

I have been involved in numerous high-profile investigations that engendered significant congressional interest, and what I have seen in this inquiry is not typical behavior from the Justice Department. Usually, department prosecutors and agents don’t want Congress jumping ahead of their investigation, and they work hard to make sure that doesn’t happen. The department wants to interview witnesses first, and prosecutors make sure that targets are fully truthful about their own potential wrongdoing and that their testimony is corroborated; use tools to flip recalcitrant witnesses; and build a case without revealing evidence to other prospective witnesses — efforts that can falter if Congress is conducting private and public interviews that may inadvertently undermine the strongest possible criminal case.

Department lawyers and congressional committees usually work collegially to avoid these issues, something that can happen when Congress has faith in the diligence and resolve of the Justice Department. That does not appear to be happening here. We have seen the unusual public filing of a letter from Justice Department leadership seeking access to committee evidence, something largely unnecessary if it had already obtained that evidence. And the fact that the letter was sent is a clear sign of a breakdown in the relationship between the two branches, something I did not see even during high-profile investigations like Enron and the Mueller investigation.

The American public is entitled to a thorough, fearless, competent and fair criminal investigation. That is still possible, and what facts that investigation reveals, and what prosecutorial decisions are made thereafter, will surely be subject to debate. But until we pursue all leads, that debate will be truly academic, to the detriment of our democracy.

Andrew Weissmann (@AWeissmann_), a former Justice Department prosecutor and senior prosecutor in Robert Mueller’s special counsel investigation, is a professor of practice at the New York University School of Law and the author of “Where Law Ends: Inside the Mueller Investigation.”